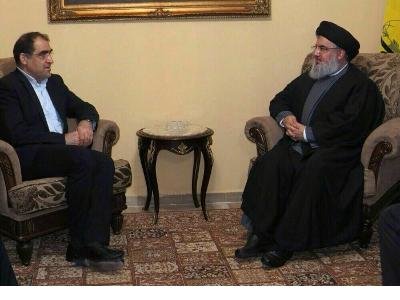 Hashemi made the remark in a meeting with Hezbollah chief Seyyed Hassan Nasrallah on Thursday in Beirut while discussing the latest regional developments.
The Iranian minister conferred with the Hezbollah chief on important health and treatment issues, as well as the possibility of further extending of Iran's experience in the field of health to Lebanon; "at the same time, we can also train Lebanese human resources from the country’s Muslims, Christians and other religious minorities,” he added.
Hashemi noted that another topic of discussion with Nasrallah was mutual benefits from investment in the field of health in Iranian private sector in Lebanon and vice versa. He expressed hope that the joint venture would set the stage for a better utilization of Iran’s valuable medical and pharmaceutical knowledge.
Hashemi further added that the two sides held talks on health and treatment issues in Lebanon and Iran’s potential to extend its assistance to the country in this regard.
"If both sides are interested, Iran could establish universities and colleges of Medical Sciences in Lebanon,” he added, while noting that the Islamic Republic is currently exporting medicines to Russia, South Africa and a number of the regional states.
For his part, Nasrallah hailed the progress made by Iran in the field of pharmaceutical industry and noted that Lebanon could play the role of a marketing center for exports of the Iranian goods to the region.
Iran's health minister arrived in Beirut on Wednesday for a three-day visit to Lebanon. On the first day of his stay, Hashemi held separate meetings with Lebanese Parliament Speaker Nabih Berri, Health Minister Wael Abou Faour, and Industry Minister Hussein Hajj Hassan..(MNA) reported.
Tags: Hassan Hashemi ، Health Minister ، Hezbalah ، Hassan Nasrola
Error Report
0