Iran to solve Saudi issue from position of strength

A senior Iranian official said We are not seeking to deepen the crisis with Saudi Arabia and are trying to resolve the issue from the position of strength and power. We also do not predict that the crisis will be worsened as the Saudis have an actual picture of Iran’s might in their minds.
"Saudi Arabia has been defeated in Iraq, Yemen and Syria and its delusions of grandeur has been shattered. Waves of the Islamic Awakening were steadily infiltrating into Saudi Arabia and [therefore] they resorted to violence to [stop possible public dissidence] as it is important to them not to face instability inside the country,” Ali Akbar Velayati, a senior adviser to Supreme Leader of the Islamic Revolution Ayatollah Seyyed Ali Khamenei, told Basirat News & Analysis Website  in an exclusive interview. Dr. Velayati: This is not the first time that the Saudis have announced the establishment of a military coalition. At the beginning of their war on Yemen, there were talks of an Islamic coalition, but in practice neither Pakistan nor Egypt helped them. Only some countries like Sudan and Djibouti gave hand to the Saudis. Bahrain [regime has long been also helping Riyadh] as it has no sovereignty and has been reigned by the Saudis. After construction of bridge [King Fahd causeway] which links the Bahrain with [the Eastern region] of Saudi Arabia, the Saudis behave in a way as if Bahrain is part of Saudi Arabia. Surely, the Bahrain people are opposed to this dependency and these tyrant and stooge rulers of Bahrain who are the servants of Saudi Arabia. Thus, other true Islamic countries, did not join this coalition despite Saudi pressure. Such talks [of forming collation] are empty rhetoric in practice.
Basirat: Turkish President Recep Tayyib Erdogan made a visit to Saudi Arabia days before Sheikh Nimr’s execution by Riyadh. Later, both sides announced that they have reached an agreement on setting up a "strategic cooperation council" to boost bilateral ties. What is your perspective on this?
Dr. Velayati: As you know, Turkey also criticized Saudi Arabia [over Sheikh Nimr’s execution]. I do not believe that Turkey will ever let its relations with Iran be affected due to Saudi Arabia. Iran and Turkey has good-neighborly relations with Iran and most of the Arab and Islamic countries have criticized the Saudi behavior.
Basirat: It seems that the Saudis are seeking an exit from their defeats in the region and are trying to persuade the US, as their ally, to play a more serious role in the   Middle East’s equation via creation of crisis and fueling the regional tensions. What do you think?
Dr. Velayati: The Americans will not leave their fate in the hands of the Saudis and the Saudis, in practice, cannot play such a game and cannot tell the Americans what to do and not to do. Colin Powell, former US secretary of state and Chairman of the Joint Chief of Staffs, referred to an important point during the tenure of George W. Bush and said, ‘[I advise our Saudi friends to stop disputing with Iran, because it [war with Iran] can send Saudi Arabia the pre-industrial era within hours. At the time, we are unable to prevent the destruction of the Saudi installations from by Iran. And the Saudis will not find even a single phone line in order to contact us’. Colin Powell told Saudi Arabia, "Be careful and do not bite more than you can chew and do not beat war drums in the face of powerful Iran.”
Of course, we are not seeking war [the Saudi regime] and have always been after good neighborly relations with Saudi Arabia.
Basirat: Is a US direct military intervention in Syria for resolving the country’s crisis probable?
Dr. Velayati: The Saudis are not within the power to force the US to get involved in Syria and this is Saudi Arabia which is required to accept and implements the US strategy in the region.
Bairat: With the regional rifts widening due to Saudi unwise actions, do you believe that relations with Europe would play a determining role in the Middle East’s developments as the Europeans share similar stances with Iran in terms of joint interests and battling terrorism?
Dr. Velayati: We are no seeking to deepen the crisis with Saudi Arabia and are trying to resolve the issue from the position of strength and power. We also do not predict that the crisis will be worsened as the Saudis have an actual picture of Iran’s might in their minds. 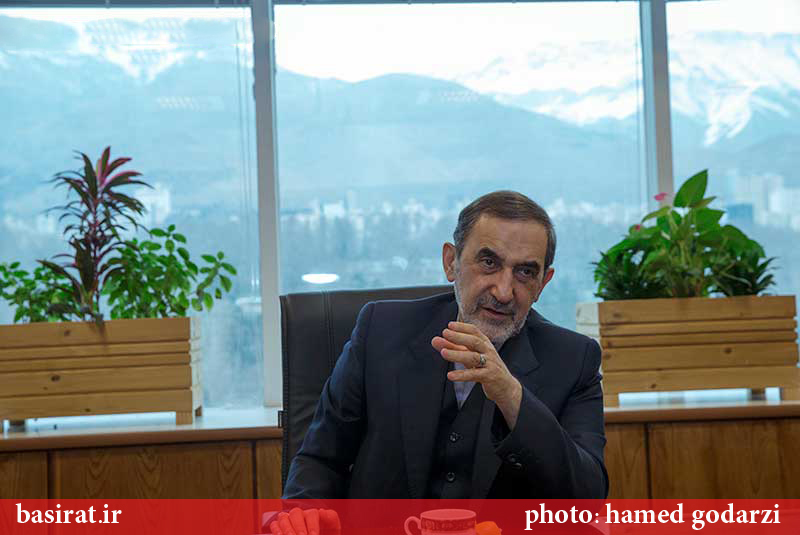 Basirat: The end of regional tensions and creation of a strong relationship with our neighbors has always been a top priority and in line with our regional interests. From this perspective, how do you see the future of the regional crises?
Dr. Velayati: We hope that the regional crises will be resolved as soon as possible. What we have done over these years has been in line with efforts to end the crises, but given the elements involved in the crises it is not expected that they are resolved in the short and medium term. This is because some want the crises in the region not to end and create crises to come to the region and dominate it.
Basirat: some argue that the US has resorted to a proxy war in the New Middle East to counter the Russian presence in the region, unlike the Bush era, when the US directly came to the region and created dependent strong governments. Do you think that the proxy war would be the strategy of the US in future of the Middle East?
Dr. Velayati: The Americans will not stop their interference in our region. They can either be involved in a proxy war or enter directly in the region; it depends on circumstances.
Tags: Dr.Velayati ، Saudi arbia Iran tesion ، Middel east tension
Error Report
0