TEHRAN (Basirat) – Leader of the Islamic Revolution Ayatollah Seyed Ali Khamenei on Saturday referred to China as a “reliable” country whose cooperation with Tehran during the time of sanctions will always be remembered. 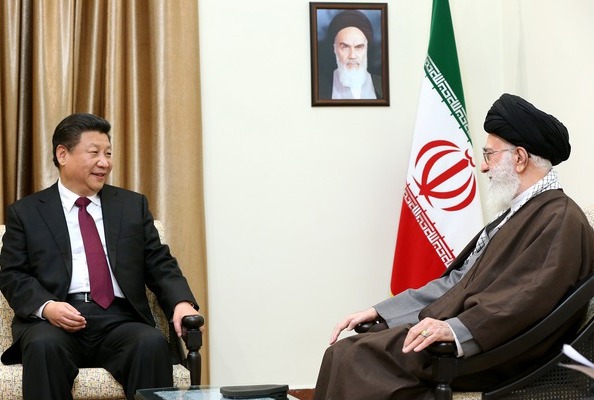 "The Iranian nation and government have always sought to expand ties with such independent and reliable states as China,” the Leader said in a meeting with China’s President Xi Jinping here in Tehran.

"The Islamic Republic of Iran will never forget China’s collaborations during the time of (anti-Iran) sanctions,” the Leader stressed, According to (Tasnim).

Imam Khamenei pointed to President Xi’s remarks on the need for reviving the Silk Road and expansion of bilateral ties between the two countries within such a framework, and described the idea as "totally logical and acceptable”.

The Leader also referred to an agreement between the Iranian and Chinese presidents on 25-year strategic ties, saying that such a deal is completely "right and wise”.

The hegemonic policies pursued by certain countries, the US in particular, have caused independent countries to be looking for wider cooperation with each other, Ayatollah Khamenei stressed, adding that Iran-China deal for 25-year strategic ties falls within the same framework and should be seriously pursued by both sides.

Xi, for his part, noted that China's support for Iran's nuclear program as well as Tehran's support for "an integrated and united China" are instances of mutual trust and independent policies adopted by the two states.

China follows an independent path of development, and is ready to expand its cooperation with Iran after the termination of sanctions, as it stood by the country under the sanctions, he said.

"The economies of Iran and China complement each other,” the Chinese president noted, adding that Beijing is prepared to deepen its cooperation with Tehran in cultural, educational, technological, military, and security fields at the level of "strategic partners”.