“religious faith and knowledge,” “scientific power,” “resistant economy,” and “preserving national dignity” as the four main elements of the might of the country and the Iranian nation.

Leader of the Islamic Revolution Ayatollah Seyyed Ali Khamenei on Sunday met with thousands of Iranian people from the city of Qom on the occasion of the 39th anniversary of the city’s uprising in support of the Islamic Revolution on the 19th of the Iranian month of Dei in the Iranian calendar year, 1356 (January 9, 1978). During the meeting, the Leader mentioned "religious faith and knowledge,” "scientific power,” "resistant economy,” and "preserving national dignity” as the four main elements of the might of the country and the Iranian nation. Highlighting the important duty shouldered by senior state officials and managers, academics, seminary scholars, intellectuals as well as political and cultural activists to further strengthen these elements of power, Ayatollah Khamenei said, "The most important lesson [to be learned from] the Dei 19 Uprising of the people of Qom is [the necessity] to know the enemy and the method and direction of its enmity, and taking timely and careful measure to counter it. 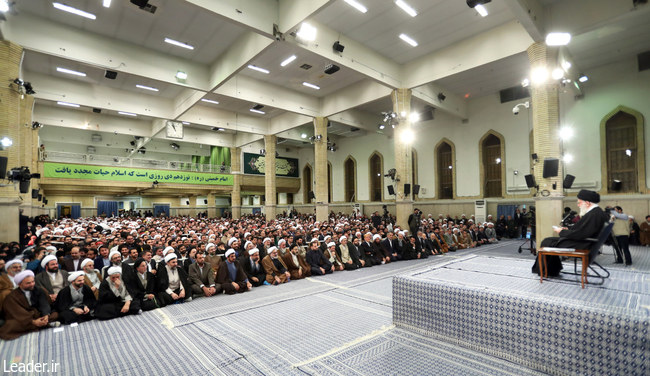 The Leader of the Islamic Revolution said recognizing "immediate needs” and taking "timely measure by the people of Qom” were the most important characteristics of the city’s uprising and added, "For this reason, the uprising by the people of Qom was effective and paved the way for subsequent moves and, finally, the victory of the Islamic Revolution.”
Ayatollah Khamenei then explained the special time frame set for fulfilling every religious obligation, noting that the best time to fulfill such obligations was "the earliest.” The Leader pointed out, "Fulfilling an obligation with delay or doing it after the right time has passed, will be like the measure taken by repentant people following the uprising of [Imam Hossein (PBUH) on the day of] Ashura, which was belated and ineffective.”
The Leader mentioned the Islamic Revolution as the "long stride of the Iranian nation” for getting rid of "dependence” and "backwardness,” and noted, "This move will certainly be faced with resistance and opposition from those people, who benefit from dependence and backwardness of the Iranian nation.”

Highlighting the enemy’s incorrect understanding of the Iranian nation, the Leader mentioned the "sedition stoked in [the Iranian calendar year, 13]88 (2009)” as an example of miscalculations by the enemy and noted, "During [the Iranian year, 13]88 (2009) and by stoking the [post-election] sedition, the enemy thought that it was too close to achieving its goals, but all of a sudden, the public movement [of the Iranian people] on the 9th [day] of [the Iranian month of] Dei (December 30, 2009), which was quite similar to [the popular] movement on Dei 19, [13]56 (January 9, 1978), took everybody by surprise.”
Ayatollah Khamenei once again emphasized that "preserving and strengthening elements of national might” was a duty for all active walks of life in the country and noted, "Even those, who are not committed and interested in religion and sharia, but love Iran and are not traitors and enemies guised as friends, must know that ‘attacking the Islamic faith of youths’, is the same as ‘treachery against the country’.”
The Leader of the Islamic Revolution concluded his remarks by reiterating that what happened on the 19th of Dei was a lesson in "knowing the enemy and its hostility methods as well as timely and all-out resistance against it” and said, "If we act upon this lesson, the spiteful and global enemy would not be able to do a damn thing in the face of the Iranian nation.”