Elections should be clean, vibrant and held with high turnout

TEHRAN(Basirat):In a meeting with the commanders and a number of the units of the Army’s four branches on the occasion of Army and Ground Forces Day, Ayatollah Seyyed Ali Khamenei stressed that “The enemy, whether the US or bigger than the US, cannot do a damn thing against an establishment that is tied to its people and cares for its nation and the nation also admires that establishment and is resistant against the enemy.” 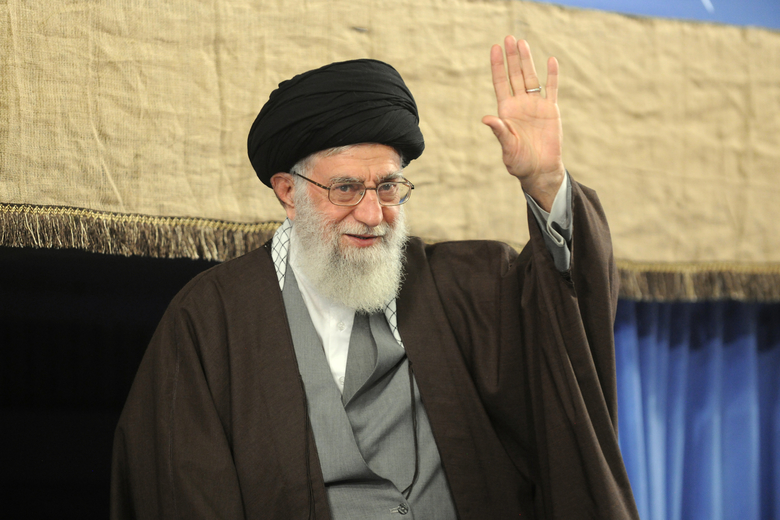 Ayatollah Khamenei pointed to the role of the might, capabilities and high motivation of the Army in ensuring the security of the country and described the military forces as one of the components of the provision of security and stressed the influence of the performance of economic, scientific, research, educational and cultural institutions in preventing the achievement of enemy goals and highlighted economic issues as the first priority of the country, saying, "The main responsibility of authorities is following up on resistance economy policies, especially in the creation of jobs and production and serious efforts to resolve the problems in the people’s livelihood and also standing up against superpowers and not fearing their rantings.

The Leader of the Islamic Revolution also pointed to the May 19 elections and underscored elections in the Islamic Republic Establishment as a symbol of religious democracy and a source of pride, dignity, might and glory, stressing, "The people, officials and candidates must appreciate the value of the elections and bring about the grounds for elections that are clean and held with passion, vigor and widespread participation.”

During the meeting, Ayatollah Khamenei commemorated Army Day and hailed the families, wives and children of Army Forces as their true comrades and allies and cited the designation of Army Day by the late founder of the Islamic Republic Imam Khomeini as one of the best and wisest measures by him, saying, "In addition to consolidating the pillars of the Army of the Islamic Republic, this move caused the desperation and frustration of many of the plotters at the time.”

He stressed that the designation of Army Day by Ayatollah Khamenei meant embracing the identity of the Army with all its characteristics and specifications at the outset of the victory of the Revolution, saying, "Safeguarding and boosting the Army was the deep and heartfelt conviction of Imam Khomeini and this correct decision by Imam made the Army shine well in all of the issues after the Revolution.”

The Leader of the Islamic Revolution cited resistance against internal plots as one of the examples of the brilliant record of the Army and said, "The Army’s involvement in the Sacred Defense era and the offering of practical examples of high levels of morality and spirituality besides combat prowess is another of its honors. Ayatollah Khamenei described martyrs Sayyad Shirazi, Babaee and many other martyrs of the Army as practical role models for morality and spirituality and stressed, "Today, the Army of the Islamic Republic is an ideological and spiritual force and has sacred and innocent motives and it is one of the important results of the measure by Imam Khomeinei to name this day [as Army Day] and these values should be appreciated and promoted.”

Highlighting the need for increasing the spiritual and psychological preparedness of the Army, the Leader pointed to the important role of the Armed Forces in the provision of security, adding, "Security is very important for every country and the more powerful and motivated the Armed Forces are, this power-even if not accompanied by military mobilization-can prepare the ground for the establishment of security. The commander-in-chief advised the Army commanders to raise human beings who can be role models and reiterated, "Moral role models such as martyr Sayyad and martyr Babaee must increase day by day in the big and imposing organization of the Army.”

The Leader of the Islamic Revolution stressed that Armed Forces are considered as one of the most important outposts for the provision of security for the people and added, "In addition to the Armed Forces, if the economic, educational, scientific, research and cultural institutions and complexes also act in line with countering enemy goals as complementary parts of each other, they will certainly lay the ground for maintaining and boosting national security and the development and progress of the country alongside the Armed Forces.”

Ayatollah Khamenei cited exploitation of the economic frailties and problems to deal blows to the Iranian nation as one the main plots by the enemy and reiterated, "For this reason, economic mottos have been chosen and highlighted in recent years.”

He described the reinforcement of the economic stamina of the country as the most sensitive and important issue, saying, "Based on this, I stress the implementation of resistance economy as a set of "work, mobilization, and action,” especially on the issues of job creation and production and the livelihood issues of the people and the employees of various institutions such as the Armed Forces.”

The Leader of the Islamic Revolution pointed to the concentration of the ill-wishers of the Islamic Establishment on using weak economic points to create disturbances, reiterating, "When the motive and objective of the enemy is clear, as a rule, the motive of the officials to implement resistance economy policies should be strengthened and I have laid out all of these issues, which are the viewpoints of elite economic experts, in detail and in private for the authorities.”

Ayatollah Khamenei added, "My expectation of the authorities is that when they see the motivation of the enemy to exploit the economic weak points, they should take up the removal of the economic frailties and closing of the loopholes.”

The Leader stressed, "Of course, the Islamic Republic Establishment and the Iranian nation have many strong points and the reason for the glory of the nation against various plots, since the victory of the Revolution, are these astonishing strong points which outdo the weak points qualitatively and quantitatively.”

The Leader of the Islamic Revolution cited the courageous and resistant spirit of the Iranian nation against the rantings and scowls of the superpowers, adding, "One of the strategies of aggressive powers for intimidating nations and governments and forcing them to fulfill their own illegitimate interests is rantings and showing self-aggrandizement.”

Ayatollah Khamenei said, "The worst scenario for a country is for the officials to fear the enemy’s rantings, because this will open the door for their entry, aggression and violation.”

The Leader of the Islamic Revolution stressed, "Fear and anxiety of the enemy’s rantings and being affected by the scowls of the powerful is the beginning of wretchedness.”

Ayatollah Khamenei added, "If anyone wants to be intimidated, there is no problem, but they should not be frightened on behalf of the nation and at the expense of the people, because the Iranian nation is standing tall.”

The Leader pointed to the assortment of plots since the victory of the Islamic Revolution until now, reiterating, "If the Islamic Republic were to fear [world] powers and back down against them, no trace and sign of Iran and Iranians would have remained by now.”

The Leader of the Islamic Revolution stressed, "The enemy, whether the US or bigger than the US, cannot do a damn thing against an establishment that is tied to its people and cares for its nation and the nation also admires that establishment and is resistant against the enemy.”

Ayatollah Khamenei alluded to the point that there is no doubt about the enmity of bullying powers, particularly the US, toward the Iranian nation, adding, "It is an incorrect statement when they say that they agree with such and such person [official] or will compromise with him, because their hostility has always existed since the era of late Imam Khamenei and after Imam Khamenei and during various administrations that have held office with different inclinations.”

He stressed that the might and resistance of the Iranian nation and the nation’s invulnerability to the rantings of the US and some European countries must continue, stressing, "An important part of the continuation of resistance and not fearing the enemy is the duty of the Armed Forces and its major part is on economists and the cultural and educational complexes, especially the staff in scientific and research sectors.”

In the final segment of his remarks, the Leader of the Islamic Revolution pointed to the forthcoming elections, describing the elections as among the honors of the Iranian nation and a source of pride, might, triumph and glory of the Iranian nation across the world, adding, "Ill-wishers sought to present Islam and spirituality as being opposite to democracy, but the Islamic Republic proved these statements wrong with religious democracy and elections.”

Ayatollah Khamenei said, "In elections, the entire nation feels that the key to the affairs of the country is in their own hands and it is them who determine the main elements of the country.”

The Leader reiterated that all the people, candidates, administration [officials], and everyone involved must appreciate the value of elections and hold it dear, adding, "The elections should be clean and full of security and held with widespread participation, passion, vigor and vitality and such elections and asset will bestow vast immunity upon the country.”

The Leader of the Islamic Revolution pointed to the luring contents of the enemy’s media and the hostile efforts to sabotage the elections, reiterating, "The Iranian nation has shown with vigilance and awareness that it has continuously exhibited that it would act in contravention of this move.”

Prior to the remarks by the Leader of the Islamic Revolution, Major General Salehi, the Army Commander, offered his congratulations on the festive days of the [lunar calendar] month of Rajab and commemorated Army and Ground Forces Day, saying, "Today, the Army is honored to be defending the territorial and ideological boundaries of the Islamic Revolution in all ground, naval, aerial and defensive fields with might and self-confidence and trust in God and beyond all components of combat readiness, it takes pride in the endless sea of its faithful experts.”