Iran ready for any scenario on JCPOA

TEHRAN(Basirat): Iran is ready for any scenario, including the US withdrawal from the nuclear deal or staying committed to it and also in case of imposing new sanctions, Head of Iran’s Strategic Council on Foreign Relations Kamal Kharrazi said. 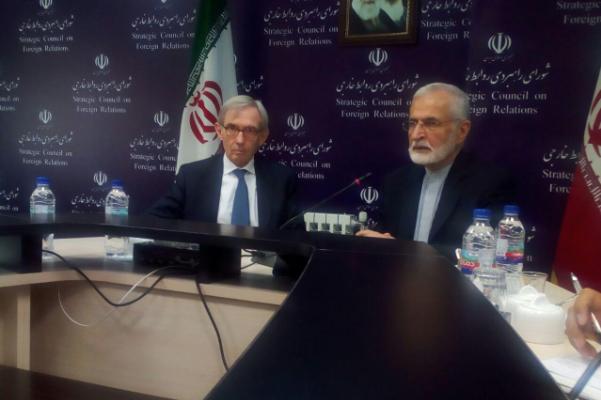 Kharrazi made the remarks on Monday in a meeting with Head of French Diplomatic Academy International Director General Michel Duclos.

Iran is also ready for the European commitment or withdrawal from the nuclear deal also known as Joint Comprehensive Plan of Action (JCPOA), he said.

Iran will never retrospect in security and defensive issues, but we will progress in this case since we are living in a dangerous region, he noted.

Kharrazi addressed those countries which showed reaction to launching Iran's Simorq satellite carrier and also Khorramshar Missile, and said it has nothing to do with UN Resolution 2231.

It has not been designed to carry nuclear war head, but it aims at defending Iran against foreigners, Kharrazi said.

He also referred to Iran's clear path, and said realities in the region and also our power makes other countries to have more positive views towards Iran.

They are after disintegrating big countries and also removing big and powerful countries against Israel, he added.

We believe that Iraqi Kurdistan Region case has failed and not only neighboring countries, but also the world is against it, Kharrazi said.

As regard his meeting with Duclos, Kharrazi said fortunately, French government's new stances towards Syria, removing the conditions to topple Syrian President Bashar al-Assad and also their positions regarding Iraqi Kurdistan Region and disintegration of Iraq brings hope for us to establish cooperation in solving regional problems.

No one is able to deny the fact that Iran is playing a major role in fighting terrorism, he noted.

Those who claim that Iran has a destabilizing role in the region are not capable to consider the fact that Iran was quick to help Syria and Iraq governments in fighting against Daesh, Al-Nusra Front and other terrorists, Kharrazi said.

He went on to say that if Iran had not helped Syria, we would have seen second Libya, a country without government in which terrorists are fighting with each other.

Kharrazi hailed France cooperation and he expressed hope for Astana initiative to bring about peace in Syria.

Iran is after making a democratic government in Syria, he said.

Regarding the nuclear deal, he said that JCPOA is a document approved by P5+1 and UN Security Council (UNSC) as well.

Any country that tends to walk away from the deal is violating UNSC ratifications and an international commitment.
Tags: Basirat ، Kamal Kharrazi ، JCPOA
Error Report
0