Intl. support rising for UNESCO after US exit

TEHRAN(Basirat): UN Secretary-General Antonio Guterres has expressed regrets over the US administration’s decision to pull out of the UN Scientific and Cultural Organization (UNESCO) over what Washington calls its “anti-Israel bias.” 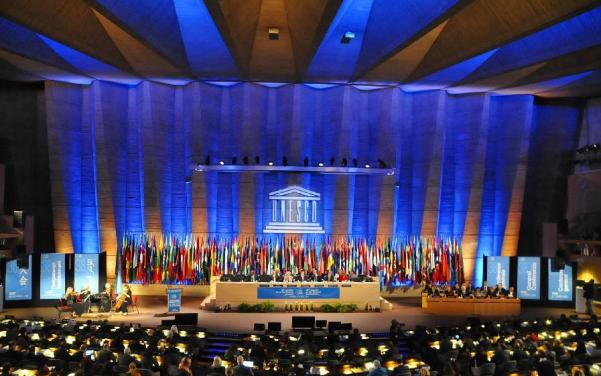 The administration of US President Donald Trump said Thursday it would establish an "observer mission” to replace its representation at UNESCO after the Paris-based body designated the old city of al-Khalil (Hebron) as a Palestinian heritage site.

Through his spokesman Fahran Haq, the UN chief said Thursday that he "deeply regrets” Washington’s withdrawal.

However, he appeared to downplay the move, with Haq saying that "there are times when there may be differences on this or that issue, but the secretary-general, as you have seen, works well with the government of the US.”

In another development on Friday, China emphasized its support for UNESCO -- a day after the US announced it was pulling out of the cultural agency.

Chinese Foreign Ministry spokesperson Hua Chunying said, "China hopes that all countries will make a contribution to preserving international peace. We will continue our positive role in the UNESCO and also conduct cooperation with other countries in this regard.”

In the midst of controversy over US withdrawal, the organization is set to elect a new director on Friday.

Whoever gets the top position will need to restore relevance to the agency whose mission to protect the world's cultural and natural heritage has been torpedoed by rivalries and a lack of financial resources.

Qatar’s candidate will face off against either Moushira Khattab, an Egyptian diplomat and politician, or Audrey Azoulay, a former French culture minister, whichever woman wins a ballot on Friday afternoon.

In the face of Arab divisions and fierce infighting between the Qatari and Egyptian candidate, France has presented Azoulay as a consensus figure who could mend fences within the organization and sooth recent tensions.

Announcing the withdrawal on Thursday, US State Department spokeswoman Heather Nauert said in a statement on Thursday, "This decision was not taken lightly, and reflects US concerns with mounting arrears at UNESCO, the need for fundamental reform in the organization, and continuing anti-Israel bias at UNESCO.”

"US withdrawal will take effect on December 31, 2018. The United States will remain a full member of UNESCO until that time,” it added.

In 2011, the former US administration cut funding to UNESCO after its members voted to admit Palestine as a full member.

Trump is also reportedly considering withdrawing the United States from the Geneva-based UN Human Rights Council (UNHRC), which his administration accuses of being biased against Israel.

Nikki Haley, US ambassador to the UN, further warned that all UN agencies would be under similar scrutiny. She said the US will evaluate all UN agencies "through the same lens.”

"The purpose of UNESCO is a good one. Unfortunately, its extreme politicization has become a chronic embarrassment,” Haley claimed in a statement, and added, "Just as we said in 1984 when President Reagan withdrew from UNESCO, US taxpayers should no longer be on the hook to pay for policies that are hostile to our values and make a mockery of justice and common sense.”

Israeli Prime Minister Benjamin Netanyahu called Washington’s decision as "brave” and "moral,” saying he has instructed the Ministry of Foreign Affairs to prepare for Israel’s withdrawal as well.

"UNESCO has become a theater of the absurd because, instead of preserving history, it distorts it,” Netanyahu said in a statement.

The UN agency has repeatedly angered the regime in Israel by standing up for the right of Palestinians.

Last month, it approved a motion that endorsed the right of the Palestinians to the al-Aqsa Mosque compound and slammed Israeli provocations around the holy site.

Palestine became the 195th full member of UNESCO in October 2011, triggering a cut in Tel Aviv’s funding to the agency.

It is not the first time the US and its allies seek to exert pressure on a UN organization, which moves to put their interests at risk by exposing their rights violations and other crimes.

In 2016, the US-backed coalition of Saudi Arabia and its allies was briefly added to a UN blacklist for children rights violations during the war on Yemen. It was, however,  removed shortly afterwards by then UN chief Ban Ki-moon, who accused Saudi Arabia of exerting "unacceptable” pressure on the international body and threatening to cut its UN funding.