TEHRAN(Basirat): UK protesters have gathered outside the US embassy in London to denounce US President Donald Trump’s recent move to re-tweet anti-Muslim videos of a British far-right leader. 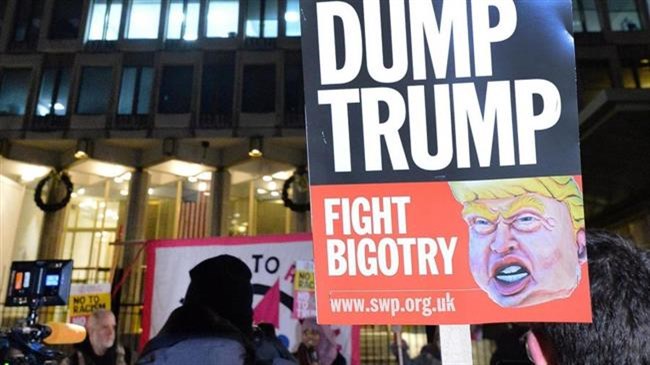 The group of around 40 demonstrators gathered outside the building at Grosvener Square on Friday evening, warning Trump to ‘stay away’ from the UK, presstv.com reported.

The protesters held banners which read ‘dump Trump’ and ‘no to racism’ while shouting chants including ‘Donald Trump stay away, racist sexist’ and ‘No racist Trump, no state visit.’

The rally was organized by campaign group ‘Stand Up to Racism’ after the US leader re-tweeted three unverified anti-Muslim videos posted by a British far-right group.

US President Donald Trump has told UK Prime Minister Theresa May to focus on ‘terrorism’ in the UK after she criticized his sharing anti-Islam videos.

On Wednesday, Trump provoked a wave of anger and disgust from US human rights groups and UK politicians for re-tweeting incendiary videos posted by Jayda Fransen, deputy leader of the far-right group Britain First.

Earlier this month, Fransen was found guilty of religiously aggravated harassment after she verbally abused a Muslim woman wearing a hijab.

A spokesman for UK Prime Minister Theresa May said Thursday ‘it is wrong’ for Trump to re-tweet the inflammatory videos.

In response, Trump tweeted that May should focus on defending Britain from terrorism rather than criticizing him. His unprecedented attack on one of America’s closest allies sparked outrage in Britain’s political establishment.

Trump, 71, was due to visit the UK in 2018, but a date is yet to be confirmed. The working visit, which would not involve meeting Queen Elizabeth, would likely avoid the mass protests threatened by a full-blown state visit.

Activists warned this week that more than a million people could take to the streets to protest his upcoming UK visit, after a boom in the number of people pledging to march following his anti-Muslim re-tweets.

Organizers of the ‘Stop Trump UK’ group told the Evening Standard there has been a ‘huge response’ after the latest controversy.  "I think people would be absolutely furious that such a man could come to our country," said Naima Omar, a student organizer at group.