Secrets behind Trump’s Decision to Relocate US Embassy

TEHRAN(Basirat): US President Donald Trump’s decision to recognize Jerusalem al-Quds as the capital of the Israeli regime seems to be aimed at distracting public opinion inside and outside the US from the “Russiagate”. 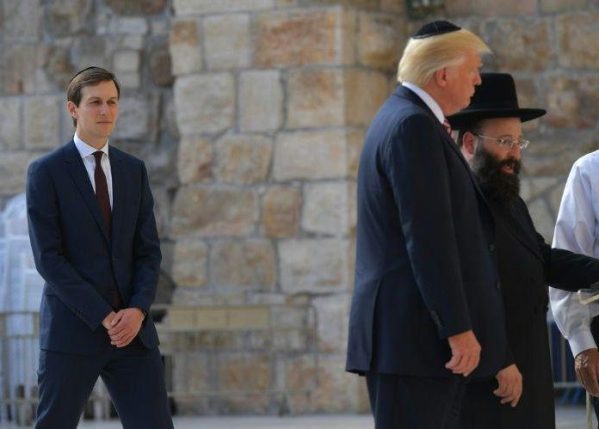 Jared Kushner, senior advisor to US President Donald Trump, who is from a Zionist and influential Israeli family, has been charged with ordering former Trump National Security Advisor Michael Flynn to contact the Russian intelligence agents during the election campaigns; a move which is considered a treason under the domestic laws of the United States.

In a situation where many analysts are talking of the possibility of Trump’s impeachment and his removal from office for being involved in such a scandal, recognizing Jerusalem al-Quds as the capital of the Israeli regime could easily distract public opinion inside and outside the United States from this scandal known as the "Russiagate”.

The Khorasan daily in a Farsi report has weighed in on the details of this issue. Here’s the full text of the article:

US President Donald Trump in a speech amid an unprecedented opposition from the international community announced that his government has decided to relocate the US embassy from Tel Aviv to Jerusalem al-Quds.

He has ordered US Department of State officials to make arrangements for the relocation of the US embassy. This is not the first time that Trump disregards the protests and objections of even the US allies. Washington’s leaving Paris Climate Accord, Trump’s decree to set limits on immigration to the United States, and his putting a spoke in Iran nuclear deal’s wheel are other examples of his disregard for international protests and oppositions. Therefore, the United States will be the first country to do so since the establishment of the Israeli regime in 1948. However, Trump’s move goes back to a Congressional approval more than two decades ago.

But now, 22 years after the approval of the law, Donald Trump has found the courage to talk about the issue and enact the legislation of the US embassy relocation. The question is, what conditions have caused Trump to take such a rude decision to pose a threat to the first qiblah of Muslims, and contrary to the UN Security Council resolutions, including resolutions 242 and 338, recognize Jerusalem as the capital of the occupying Israeli regime? To find an answer, it should be stated that, regardless of the promise Trump made in this regard during the campaigns, one must pay attention to the timing of such a decision. The international developments in West Asia and the Muslim world can also help us in finding an answer.

Considering the US domestic developments, this happens at a time that interaction between Trump and his associates with Russian operatives have grabbed the headlines. Particularly, when we see his son-in-law – Jared Kushner – who is his senior advisor on issues of West Asia, is at the forefront. Kushner, who is from a Zionist and influential Israeli family, has been charged with ordering former Trump National Security Advisor Michael Flynn to contact the Russian intelligence agents during the election campaigns; a move which is considered a treason under the domestic laws of the United States.

In a situation where many analysts are talking of the possibility of Trump’s impeachment and his removal from office for being involved in such a scandal, recognizing Jerusalem al-Quds as the capital of Israel could easily distract public opinion inside and outside the United States from this scandal known as the "Russiagate”. In addition, these days many have reported the possibility of Kushner’s departure from the White House and the return of the Trump’s son-in-law and his daughter to New York. This is due to his role in the Russiagate scandal as well as the serious opposition of the security apparatuses to his foreign interactions. Kushner, whose main profession is real estate developing, is having troubles in his business and will need $1.2 billions in loan for one of his family skyscrapers by 2019. Meanwhile, his foreign partners, including Chinese, Russian and Qatari investors, have withdrawn for various reasons. The decision to relocate the US embassy from Tel Aviv to Jerusalem al-Quds is the result of Kushner’s lobbying. It is something natural that Trump wants to crown Kushner with the achievements of this dirty deal with the Zionists before his son-in-law leaves the White House.

On the other hand, based on the US media reports, as Trump’s decision to move the US embassy from Tel Aviv to Jerusalem was unpredicted, the grounds for such an act are not prepared; therefore, the embassy relocation will take at least 3-4 years. Meanwhile, a senior White House official has told CNN that "no embassy can be built within three to four years.” Thus, the new US embassy in Jerusalem al-Quds may not be launched during the first term of Donald Trump.

Accordingly, the US embassy in Jerusalem al-Quds may never be opened if a president opposed to Trump’s policies would take office in 2020. In other words, with this move Trump has won a large part of the Republicans’ votes i.e. the Zionist Christians, for the 2020 election; something that can guarantee his victory in the upcoming presidential election.

However, regardless of personal and domestic interests, the shift in Washington’s stance on the issue of Jerusalem al-Quds roots in the developments of the Muslim world and the West Asian region as well. The split in the Muslim world following the sectarian approaches of some of the leaders of the Muslim countries besides the sinister phenomenon of ISIS on the one hand, and the erosion of the power of the mainstream frontline against Zionism, including Syria, have given Trump and the Zionists the courage to make the most out of the existing divisions to achieve their goals. In addition, what is most apparent in the latest White House plot is the betrayal of the Saudis, particularly Mohammed bin Salman, to the Palestinian cause. Bin Salman, who has been desperately in need of US support amid the Arab country’s internal conflict, in a secret deal with Jared Kushner has agreed to sell out the Palestinian cause in exchange for concessions such as Washington’s guarantee to protect his kingdom. That’s why these days we are witnessing the resumption of talks on transfer of nuclear technology from the United States to Saudi Arabia. These talks were halted for many years due to the opposition from the Zionist lobby.

Additionally, Riyadh, which had previously seen itself as the leader of the Arab world, does not even have any allies in the region at present. The recent summit of the Persian Gulf Cooperation Council, which was held only with the presence of Qatari and Kuwaiti leaders, proves this claim. That is why bin Salman, having understood the reality of the end of Al Saud rule, has resorted to anything and anyone including the Israeli regime for its survival, exactly like a drowning person who grabs any dried branches. The former US presidents have always avoided major conflicts with Muslim countries because of their dependence on oil resources and also their involvement in the war in the West Asian region. Nonetheless, these days the two aforementioned dependencies do not exist for Washington, and instead countries like the United Arab Emirates, Saudi Arabia and Bahrain are involved in political prostitution.

Conversely, we have to bear in mind that what has kept Palestine and Jerusalem al-Quds alive as part of the body of the Muslim world in face of the voracity of the Zionist aggressors, has never been the guarantee of Saudi Arabia or other traitorous countries who betrayed to the cause of the Palestinian people. Palestine has survived due to the resistance of its own people. This is the truth that Trump and his team of advisors will soon realize.

The Zionists can offer to the Americans an existing building, which can be used to receive Trump, Queen Elizabeth or the Royal Family, etc.