TEHRAN (Basirat): Islamic Revolution Guards Corps (IRGC) Deputy Commander for political affairs Brigadier General Rasoul Sanayee Rad believes that if Palestine was the first issue of the Muslim world, club-owner like Trump did not dare to commit such a foolish act. Indeed, the differences in the Muslim world has led to such an unwise decision that so far no US president have been willing to make. 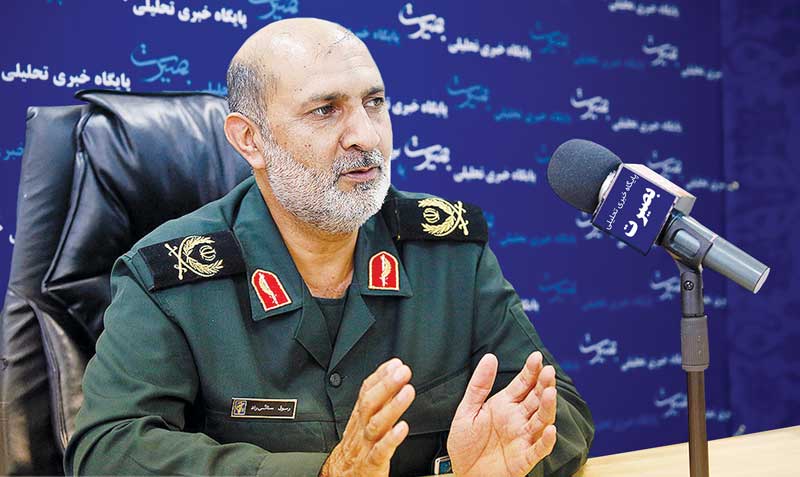 Trump’s recent decision on Jerusalem al-Quds has dangers for the Muslim World, but at the same time would bring about good results for the Muslims as well.

In an editorial in Sobh-e-Sadeq news website, Sanee Rad has elaborated on the roots and consequences of Trump’s decision. Here is the full text of his article:

Donald Trump, the controversial President of the United States, who is known for his conflicting and unbalanced decisions, in a speech on Wednesday, December 15, recognized Jerusalem al-Quds as the new capital of the occupying regime and ordered the relocation of the US embassy to the city. Interestingly, he claims to be in favor of peace, and will support the two-state solution, if the two sides accept it during the negotiations.

Trump’s decision was in fact a reaffirmation of the decision made by the US Congressmen in 1995, who demanded the relocation of the US embassy to Jerusalem al-Quds amid the Palestinian talks with the occupying regime. The Act was an apparent proof of the US support for the occupiers that paves the ground for them to insist on their aggressive demands. However, the previous presidents of the United States, with regard to its dangerous consequences, had refused to practically follow up on the Act ratified by the Congress, which was the fruit of the Zionists’ lobbying and an explicit announcement of siding with the Zionists.

Perhaps, one of the reasons for not implementing the Act was that the United States was the only party wishing to perform it. None of the statesmen with the least political wisdom were willing to follow it as it could lead to the isolation of the US in the world, and incur heavy costs at the expense of the Zionists.

The main reason for not joining the US in implementing the Act is the nature of the Zionist regime, which, due to its malevolent Apartheid attitudes, has no respect for the rights of followers of other religions. If the grounds were prepared for this regime to claim sovereignty over Jerusalem al-Quds as its capital city, it would not hesitate to destroy the sites of other religions and isolate their followers from this sacred city and displace them. It is noteworthy that the regime has already kept on with its settlements at the expense of usurping the homes of the main inhabitants and replacing Zionist immigrants despite opposition from the international community.

Hence, Trump's decision is in fact an insult to the feelings of Muslims and Christians and also a support for the Zionist apartheid; a racist apartheid that in order to survive must destroy and eliminate others.

Given this and the bad record of the Zionist apartheid regime, many countries including Canada and Britain, who are the allies of the United States, and the Islamic Republic of Iran, which has always supported the oppressed Palestinians, have opposed Trump’s decision. Although the type and extent of these oppositions are different, but all show irrationality of Trump’s move.

This comes as Israeli regime’s Prime Minister Benjamin Netanyahu welcomed the decision considering it as a kind of approval that Jerusalem al-Quds is the capital of the occupying regime, and will be part of any future negotiations.

In fact, only this radical movement, which is ruling over the occupied territories, welcomed Trump's move (or in other words his service to the Israeli regime), and took it as a card for any possible negotiation.

After the decision faced widespread opposition from the international community and also a negative reaction from Muslim countries, the US secretary of state announced that the move was delayed for another six months just some hours after Trump signed an embassy relocation order. It implies that there are some opponents of the decision within the US government as well who believe the decision is a wrong one while considering its dangerous consequences.

However, what encouraged the US president, who is mogul and night-club owner, to make such a foolish decision? In response to this question, we can mention the following factors:

1- Trump owes something to the Zionists to balance political and security equations between them and the Arab governments. US government earlier inked military and non-military contracts worth more than $ 500 billion with the Arab states which gave them more power. Therefore, Washington had to compensate it for the Zionists. Indeed, Trump’s decision was kind of an offering service to the Zionists by giving a proper share of milking (the Arab States) to the watch dog (Israeli regime) so as to give the chance to Tel Aviv to scare others and bark in the west Asia when necessary.

2- The other factor were the worries about the future of regional equilibrium with the defeat of ISIS and overthrow of the Takfiri terrorists, who have so far created a safe place for the Zionist regime, and also been considered as the appropriate tool of the United States and its Arab and Hebrew allies to wage proxy war in the region to erode the power of resistance (movement). With the failure of the terrorists and the opportunities for the axis of resistance to restore itself to focus on the containment of a cancerous tumor called the Zionist regime, Tel Aviv and its supporters would be forced to return to the negotiating table. Therefore, Trump gave this card to the Israeli regime’s prime minister to take the issue for granted and announce that any future political negotiations would be held with Jerusalem al-Quds considered as the capital of the occupying regime.

3- The overwhelming influence of the Zionists on the White House, and the significant role of Trump’s Zionist son-in-Law, Jared Kushner, in the West Asian region issues next to his special ties with the Zionist regime and the his overt and covert lobbies with some US regional allies, especially the Al Saud regime proves that Trump is under the influence of a menacing and perilous course which finally ends in such irrational decisions.

5- As Secretary General of Lebanon’s resistance movement Sayyed Hassan Nasrallah said Trump’s decision is a new Balfour Declaration, which is the result of the treason of some Muslim leaders against the cause of Palestine. These leaders, who have covert and overt ties with the Israeli regime, have recognized this occupying entity and shamelessly sold out the Palestinians. They are unaware that this regime represents the hegemony and exploitation of the West in the West Asian region. In order to maintain its domination and loot out the regional resources, Tel Aviv just wants to see the regional regimes in weakness and obedience. Therefore, as the West was pursuing the erosion of the power in Syria and Iraq by using Takfiri terrorists, they would continue to use the Zionist regime in order to erode the power of the Muslim countries and milk the dependent regimes. Betraying the Palestinian cause would be at the cost of betraying the entire Muslim world and destroying the dignity of all Muslims.

Nevertheless, the other side of this strategic mistake of Trump is the formation of a kind of vigilance and the emergence of new conditions that can lead to auspicious events as follows:

1- The issue of Palestine and al-Quds turns into the first priority of the Muslim world.

2- It creates unity and convergence in the Muslim world regarding Palestinian issue.

3- Any overt and covert ties of Muslim statesmen and governments with the Zionist regime will be taken as a treason which leads to more isolation for this ominous regime in the region.

4- It reveals the US support for the Zionist regime more and rejects their claims of mediation between the Zionists and Palestinians.

5- It also proves the ineffectiveness of any negotiations with the Zionist regime, and leads to return of the Palestinians to the intifada and their struggle to achieve the right to exist.

Therefore, Trump’s stupid decision and his terrible mistake not only does not reinforce the Zionist regime, but will lead to its further weakening, and, God willing, will lead to its annihilation soon. Perhaps, it may lead to the return of some Salafists, who were deceived by the Takfiris, to struggle for the liberation of Quds from the Zionists. As Imam Musa Sadr has once warned Yasser Arafat that the principles of Jerusalem al-Quds (residents) will not let the city be freed by non-believers. Thus, the recent events offer a chance for the believers to retain their true Muslim identity for the liberation of the Jerusalem al-Quds and bringing shame to the Muslim world betrayers.

That is why Leader of Iran’s Islamic Revolution, Ayatollah Seyyed Ali Khamenei in a meeting with the country officials and the guests of the Islamic Unity Conference, condemned the claims of the enemies of Islam about the announcement of Jerusalem as the capital of the Zionist regime as a result of their desperation and failure stressing that "The Muslim world would undoubtedly stand against this conspiracy, and the Zionists will be dealt a heavy blow with this move. The Islamic Ummah [society] is the ultimate winner, and dear Palestine will at last be liberated without doubt.”