TEHRAN (BASIRAT): Nikki Haley, the US Ambassador to the United Nations, is a close figure to the night-club-owner President of the US Donald Trump, and she has done her utmost to support Trump’s controversial policies. Some experts believe there are secret goals behind the accusations recently raised by US Ambassador to the UN Nikki Haley about Iran’s alleged supply of ballistic missiles to Yemen. 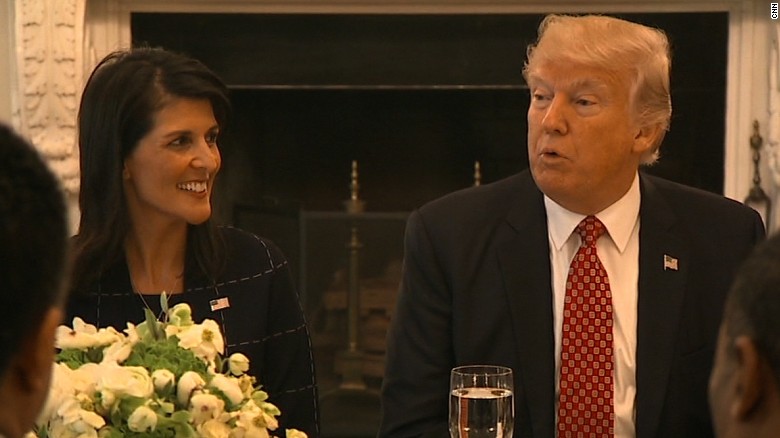 The US ambassador to the United Nations recently showed a wreckage of a missile claiming that Iran provides such weapons to the Yemenis to hit Washington’s allies in the region.

While many experts rejected her allegations, many other also believe that there are some secret goals behind such ridiculous show. Political analyst Rasoul Sanaie Rad in an opinion piece published by Basirat news website has discussed the goals behind Nikki Haley’s move.

Here comes the full text of this article:

Nikki Haley, the US Ambassador to the United Nations, is a close figure to the night-club-owner President of the US Donald Trump, and she has done her utmost to support Trump’s controversial policies. Displaying the wreckage of a missile alleging launched from Yemen to Saudi Arabia, Haley claimed that Iran is the manufacturer of the missiles that are found in Yemen and other regions which is a violation of the UN Security Council resolution. Hence, she said, she will take the case to the UN Security Council.

At the same time as Haley’s political show, the European Parliament in a statement reiterated its accusations and asked Iran not to engage in missile activities that are in violation of United Nations Security Council Resolution 2231.

Of course, Nikki Haley’s claim was rejected by US military officials, showing that those who are following scenarios created by criminal Al Saud regime, are in a rush to justify Donald Trump's illogical policies that are of no value or legal credibility.

Perhaps the involvement of US military and defense officials in this case is due to their concern for the possibility of the repeat of the Iraqi invasion scenario, which was carried out after the allegations made by the Bush administration, while the British Prime Minister Tony Blair also confirmed it. They claimed that weapons of mass destruction exist in Iraq, and as a result they launched a massive military strike against Iraq in 2003. This led to many scandals, and later it was revealed that this has been a big lie. The invaders suffered heavy financial and military damage, and a hatred towards the US and its allies was incited in the West Asian region. It also spread a terrible terrorism that today is a threat to the whole world. In other words, the result of that big lie and the foolishness of George W. Bush brought historic untrustworthiness for the US, whose costs are still being paid by the US taxpayers and the families of the soldiers who were killed.

Amid worldwide protests against Trump’s recognition of Jerusalem al-Quds as the capital of the occupying Israeli regime, which has stirred up hatred for the United States in the entire Muslim world and even among those who are sick of warfare, such a claim (by Haley) could be aimed at pursuing multiple goals including:

1- Displacing the threats in the West Asian region and even the global arena by setting forth such a baseless claim as well as saving the Zionist regime and the Al Saud, which have always played a key role in the creation of war and terrorism. They also want to cover up Trump's mistake in introducing Jerusalem al-Quds as the capital of the Israeli regime, and at the same time cover up Washington’s overt supports for Saudi mercenaries in their assault on the oppressed people of Yemen. On the other hand, the Al Saud’s support for violent terrorism has brought disgrace on the White House in the world public opinion.

2- Increasing military rivalries in the region by controversial claims to milk the affiliated regimes. Dependent regimes that the White House considers them as fat cows and good targets for signing billions of contracts with major arms companies to create a boom for the US and European cartels to gain huge profits from these conditions.

3- Eroding the power of the Islamic Republic of Iran and its deterrent ability to undermine its regional role on the one hand, and opening the possibility of imposing any illegitimate pressure or demands (on Iran), or transforming it into a submissive country that like some of the dependent countries of the region may turn into an ally of the US and the West.

4- Influencing the power balance in the region after Yemenis’ firing of missiles into Saudi Arabia and the United Arab Emirates, especially when the defeat of the US and its allies in Yemen was revealed; a defeat that they had already suffered in Syria and Iraq.

All these come as the Islamic Republic of Iran has witnessed the destiny of Iraq and Libya, in which disarmament was the prelude to the acts of aggression in these countries. Moreover, Iran’s missile attack on Takfiri terrorists that stopped their assaults and dismayed their regional advocates, proved that the Islamic Republic will never allow outsiders to intervene in their missile defence affairs, and such shows by the Americans will not save the Al Saud from Yemen’s quagmire.

If Nikki Haley’s claims were true, she could never justify the complicity of the US with the Al Saud, and the Zionist regime as well as ISIS in crimes against humanity. The Zionist and Al Saud criminal acts are committed by the help of US aircraft and the White House donations. The formation of ISIS's wild terrorism was the result the White House's wrong policies and Washington’s use of terrorists to wage proxy wars in the West Asian region.

Finally, the Islamic Republic, with its experience of the JCPOA, will never be fooled by the next deals. Therefore, the division of labor between the European Union and Trump will not be effective in adopting policies to put pressure on Iran to drag our country's missile power into political dealings. Such policy has already been proved as a futile effort. Certainly, insisting on the adoption of such a policy, only leads to the great nation of Iran’s more hatred (for the US), and will further stir up distrust.

Nikki Haley analyzes international events with angry.
she is very inexperienced
redtulip
0
0
Answer to this comments

we are always defender of Oppressed Yemeni People