TEHRAN (Basirat)- A senior Iranian diplomat said the "unparalleled” experience of Iran's Islamic Revolution Guards Corps (IRGC) in diverse fields of security and defence has made it distinct from other regional armed forces. 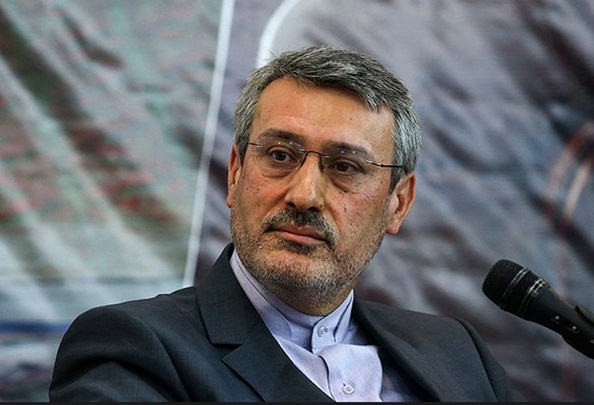 A senior Iranian diplomat said the "unparalleled” experience of Iran's Islamic Revolution Guards Corps (IRGC) in diverse fields of security and defence has made it distinct from other regional armed forces.

Dr. Hamid Baeidinejad, the head of the Department of Disarmament Affairs, who also doubles the director-general for political and international security affairs at the Iranian Foreign Ministry, delivered a speech on the topic of "Security and Defense Diplomacy” in a gathering of experts of the IRGC's Center for Political and International Studies on Tuesday, April 19.

At the beginning of his speech, Mr. Baeidinejad, who is also a senior member of Iran's nuclear negotiating team, expressed satisfaction with his presence in the gathering and highlighted the importance of contacts between expert centers and executive centers of the country in today's complex world.
He further pointed to the definitions of different aspects of the security concept and stressed the necessity to pay heed to military as well as non-military aspects of security and to correctly explain the defensive nature of the Islamic Republic of Iran’s military doctrine.

Here is a summary of the speech:

For example, a country which is militarily powerful but economically weak and dependent is vulnerable in terms of security. So we must define a broader concept of security than in the past, and this is our approach to the issue of security today.

On the other hand, diplomacy and media are considered as important in elaborating the security doctrine of a country in the today’s world because the way that diplomats and media interpret the power of a country is very significant and decisive. As a country becomes more powerful, the role of diplomats and media in eliminating ambiguities and misunderstandings regarding the security doctrine of that country becomes more important.

Our enemies are constantly hatching plots against our country at all civilian and military levels and if we are not vigilant, the plots will be carried out. Therefore, we should be prepared to counter the threats at all levels.

One of the objectives of our enemies today is that they are seeking to put military aspects of the country’s security against its economic elements through making the country’s defense progress incur heavy costs politically and economically.

Therefore against the will of the enemy, we should make efforts to progress on two parts and make them fit well together.

The unparalleled experiences of the IRGC in various security fields and conditions have turned it to a force distinct from other countries’ armed forces.

We should see security in a more broad sense. In this area, a lot of institutions and organizations are involved but this is primarily the task of the country’s defence and diplomatic apparatus, which should provide the ground for the country’s growth in hard and soft aspects and we think that this ground is being provided today.

"If we are not powerful, we will be attacked,” this is a lesson that we learned from the experience of eight years of war imposed by Iraq. Our country’s power is increasing and today, we have no restrictions in defense fields, as in our missile program, we have no technical limits anymore. Today, our scientific power may reach at some point , if we determine, to be able to provide technically to the country the opportunity to even produce longer- range missiles, but the question is why the Islamic Republic of Iran, despite overcoming technical limitations, do not follow such a policy? The answer is that Iran's military doctrine is defensive, and not offensive. This is a decision made by the highest levels of decision-making bodies in the Islamic Republic.

Unlike the military policies of other countries in the region and great powers in the world, our military doctrine is not after an escalation of threats in the region or the world. We have never intended to be the first one in making threats. All of our military power is to counter and fight back the enemies’ threats and is completely defined within the framework of the defensive doctrine.

Hence, it is the duty of the media and the country's diplomatic apparatus to explain this issue properly. These issues are important in providing the country with security and stability.

Therefore, coordination and interaction among relevant institutions and organizations, such as diplomatic apparatus, media and military commanders, is a necessity to advance strategic objectives to produce and increase national power.