US-led strikes aimed to cause rift between Iran, Russia, Turkey

TEHRAN(Basirat): Iran’s Foreign Ministry Spokesman Ghasemi said Mon. that the airstrikes by US, UK and France on Syria aimed at creating a rift between Iran, Russia and Turkey as the three guarantor states of ceasefire in Syria. 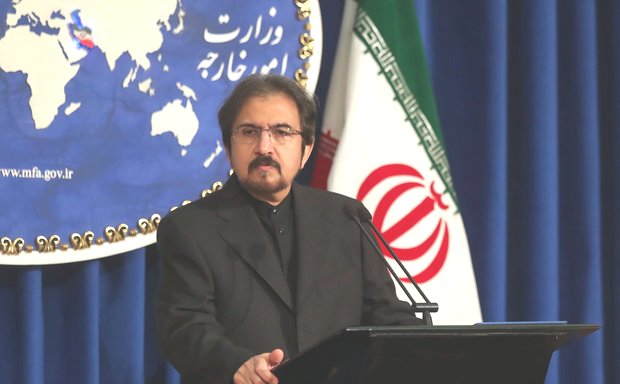 Speaking in his weekly press conference on Monday, Iranian Foreign Ministry Spokesman Bahram Ghasemi said the US-led airstrikes in collaboration with UK and France against Syria were "invasive, wrong, warmongering, and contrary to all international rules and conventions.”

Asked whether the attack could serve to pressure Iran on its missile program and regional role, Ghasemi stressed that "such measures will never have any particular impact on the policies of the Islamic Republic of Iran.”

To a question about Iran’s possible reaction in case of escalation of attacks against Syria, Ghasemi did not hint at any particular response, but maintained that the repeat of such attacks by the US was a sure possibility given Washington’s bad record in foreign policy. He stressed that the current dire situation in the Middle East region is the result of the US’ major strategic mistakes.

About the effect of the US-led strikes on the Astana political process he said, "one of the main objectives of this hasty and unwise measure by the US and its two other allies was to create a rift between the three guarantor states of ceasefire in Syria, which had founded the Astana process and achieved success on many cases.”

"Maybe they [US, UK, and France] were not happy with the successes we made on Astana process and their recent move was to create a rift between Iran, Russia and Turkey,” he added.

Ghasemi went on to note that such an assumption is a mere case of wishful-thinking, adding "the three guarantor states, despite some differences of opinion, will continue to cooperate in the fight against terrorism and preserving the territorial integrity and national sovereignty of Syria.”

Asked about the recent attack on Syria by the Israeli regime, Ghasemi said, "Iran had a timely response in condemning the attack by the aggressive regime of Israel. But this is the right of the Syrian people to take stances against such measures.”

Ghasemi was referring to the attack carried out by two Israeli F-15 warplanes from Lebanese air space on T-4 air base in Homs on April 8 that killed and wounded several people. Following the Israeli attack, Syria warned about its "dangerous repercussions”, stressing that assault would not have been possible without massive US support.

Elsewhere, Ghasemi touched upon the Iran nuclear deal, dismissing as ‘mere speculation’ the news raised in certain media outlets about US and EU’s agreement on ‘fixing’ the 2015 nuclear deal.

He noted that he was uninformed about the number and the content of recent meetings held by certain European countries with the US, adding "at any rate, the JCPOA is a matter between Iran and the 5+1, and issues raised in some media outlets [about ‘fixing’ the nuclear deal by US and the European sides] are not credible and are mere speculations.”

About the telephone conversation between Iran’s Zarif and the British Foreign Secretary Boris Johnson on Saturday, Ghasemi said the call was made by the British side during which Iran voiced its protest against the attack of the three Western countries on Syria. Ghasemi added that Zarif called the US-led strikes as a ‘criminal’ measure.

To Mehr News’ question about Zarif’s agenda during his Tajikistan trip, Ghasemi noted that one major topic of discussion would be the current developments in Central Asia and the Caucasus. He expressed hope that the visit would be an effective step toward improving the bilateral ties between Tehran and Dushanbe.