TEHRAN(Basirat)- Over the weekend, Israeli forces opened fire at demonstrating Palestinians, wounding nine, and escorted settlers into Area A in the West Bank. 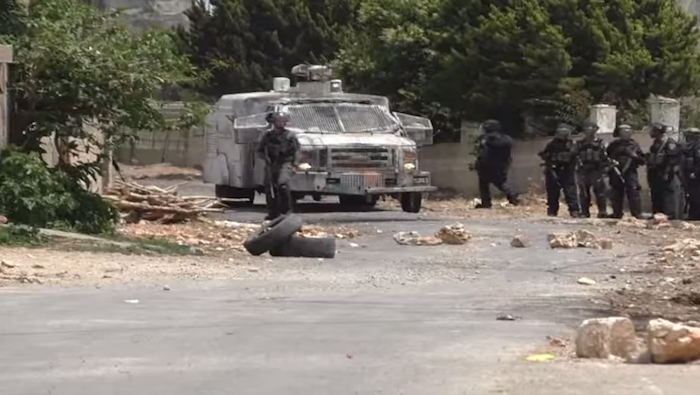 In the West Bank village of Kufr Qaddum, Israeli soldiers attacked demonstrators at the village’s weekly peace march against Israeli settlements and the 13 yearlong closure of the village’s main entrance. Israeli forces shot teargas and live fire at demonstrators before chasing them into the heart of the village and spraying people, homes and local businesses with skunk water. Wasif Hikmat, 19 years old, and his brother Imran Hikmat, 20 years old, were both shot with live fire and taken to a hospital in Nablus. Dozens of others suffered from teargas inhalation.

In Bil'in village, near Ramallah, Israeli soldiers attacked the village’s weekly peace march. Israeli forces shot rubber bullets and tear gas to block participants from reaching the western side of the village – where the separation wall stands. Israeli soldiers’ liberal use of their weapons against protesters caused dozens of olive trees and wheat fields to catch on fire.

Also on Friday, around 4,000 settlers, under the protection of Israeli soldiers, entered the West Bank city of Nablus, through its eastern side. According to the Palestinian Information Center, dozens of Israeli soldiers cordoned off Josephs Tomb before busses full of settlers streamed into the tomb and prayed in it. The Oslo Accords define Joseph’s Tomb as Area A – that is, ostensibly under the full civil and security control of the Palestinian Authority. Clashes erupted with Palestinian youth in the area. Israeli soldiers opened live fire on youth, wounding at least two.

In Gaza, during a protest against the Israeli occupation, east of Gaza city, a Palestinian youth was injured with live fire.

Israeli forces opened fire at farmers and shepherds east of Khan Yunis, in the southern Gaza Strip, Ma’an News Agency reported. Witnesses said Israeli forces came close to a school in Khuzaa village, exited their jeep, and opened fire at a group of Palestinians. No injuries were reported.

On Saturday afternoon, for the second day in a row, dozens of residents in Kufr Qaddum protested Israeli settlements and the closure of the village’s main entrance. Soldiers occupied the roof of Palestinian houses, and opened fire on demonstrators. Wael Abdallah, 16 years old, was shot by live bullet in his leg.