Tel Aviv Must Be Held Accountable for Gaza Killings: HRW

TEHRAN (Basirat): Human Rights Watch (HRW) called on the international community to hold accountable the Israeli regime for the cold-blooded killing of unarmed Palestinian demonstrators in the besieged Gaza Strip, as more than 130 inhabitants of the impoverished sliver have been killed recently by the live fire of Israeli soldiers. 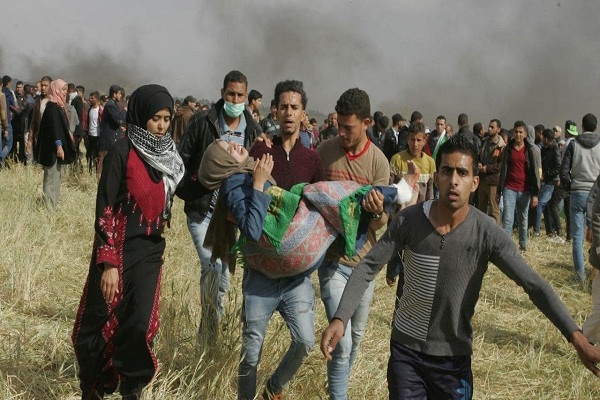 The New York-based rights organization said in a report on Tuesday that as many as 124 Palestinians had lost their lives in a series of peaceful demonstrations in the vicinity of the border separating the blockaded Gaza Strip and the Palestinian territories occupied by the Israeli entity since late March.
The report added that more than 4,000 others had also been wounded by live ammunition.
The Palestinian medical sources, however, say that at least 135 Gazans have so far been killed by the Israeli live fire, including 14 children, either at the protesting scenes or later in hospital due to injuries. They also raise the number of the wounded to over 15,000 Palestinians, who either sustained injuries due to live fire or inhalation of tear gas, of them 300 are currently in a critical condition.
According to the HRW report, senior Israeli officials approved orders to shoot at protesters who posed no imminent threat to life, acts that might amount to war crime.
It added that the Commission of Inquiry, established by the rights group, should identify those officials who sanctioned open fire regulations that violate international norms.
The Gaza clashes reached their peak on May 14, the eve of the 70th anniversary of the Nakba Day (the Day of Catastrophe), when the Israeli regime forcibly drove more than 760,000 Palestinians, now estimated to number nearly five million with their descendants, out of their homes.
In a single day, more than 60 Palestinians were shot dead and over 2,700 wounded by Israeli snipers who had been positioned along the fence separating the occupied territories from Gaza. Protesters had gathered near the fence in protest against the inauguration of the US embassy in Jerusalem al-Quds.
The death toll has drawn international criticism, but the US, which has angered Muslims with its embassy move, has supported Israel. 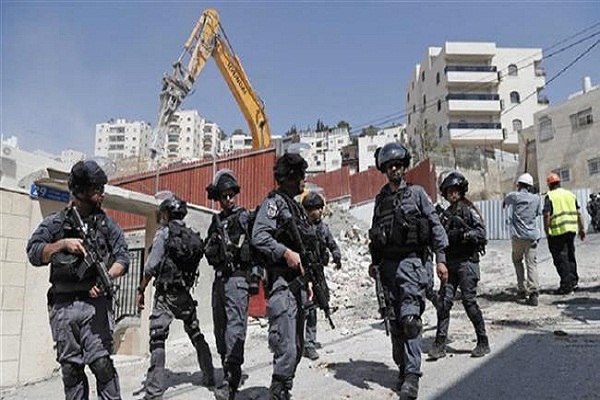 Gaza has been under the Israeli siege since June 2007, which has caused a decline in living standards as well as unprecedented unemployment and poverty.
Israel has also launched several wars on the Palestinian sliver, the last of which began in early July 2014 and ended in late August the same year. The Israeli military aggression killed nearly 2,200 Palestinians and injured over 11,100 others.
Israel builds new settlements
Elsewhere in the report, HRW said that Israeli authorities had approved the building of 1,000 new housing units in six new settlements in the occupied West Bank. The project is reportedly the largest settlement construction in occupied Jerusalem al-Quds in recent years.
It added that back in May, the Israeli Supreme Court approved the cabinet’s plan to completely demolish Khan al-Ahmar Ab al-Hilu, a Palestinian village of 180 inhabitants east of Jerusalem al-Quds. The village also included a school, which educates 160 children from five surrounding villages.
HRW said the transfer of civilians into occupied territory and forcible transfer of people in the occupied territory "are war crimes.”
More than half a million Israelis live in over 230 settlements built since the 1967 Israeli occupation of the Palestinian territories of the West Bank and East Jerusalem al-Quds. The presence and continued expansion of Israeli settlements in occupied Palestinian lands have created a major obstacle for efforts to establish peace in the Middle East.
In recent years, Israel has expanded the authority of its military to demolish Palestinian homes in the occupied territories. The Israeli military can now execute demolition orders in the so-called Area C of the West Bank just days after they are issued.
International bodies and rights groups argue that Israel’s sustained demolition of Palestinian homes and structures in the occupied West Bank and East Jerusalem al-Quds is an attempt by the Tel Aviv regime to uproot Palestinians from their native territories, and confiscate more land for expansion of the illegal settlements.
Source: Press TV