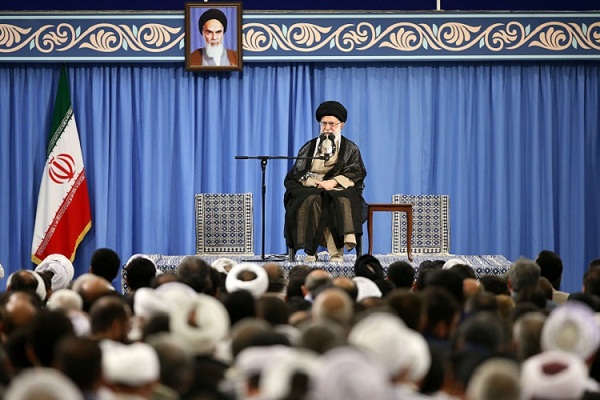 Masjid Al-Haram in Mecca and Prophet’s (PBUH) Mosque in Medina belong to all Muslims not just to those in control of the holy land, the Leader said, speaking in a meeting with Iranian Hajj official on Monday.
Ayatollah Khamenei added that no one has the right to prevent the realization of the true concepts of Hajj.
If a state or government does so, it would be keeping people back from the Path of Allah, the Leader said, referring to verse 25 of Surah Hajj ("As to those who have rejected (Allah), and would keep back (men) from the Path of Allah, and from the Sacred Mosque, which We have made (open) to (all) men - equal is the dweller there and the visitor from the country - and any whose purpose therein is profanity or wrong-doing - them will We cause to taste of a most Grievous Penalty.”)
The true Hajj should include the Baraaat min-al-Mushrikeen (disavowal of disbelievers ritual) and pave the way for enhanced unity among Muslims, Ayatollah Khamenei stressed.
The Leader also referred to the Mina Tragedy in 2015 in which several thousand Hajj pilgrims, including Iranians, lost their lives, stressing the need for insistently pursuing the case to restore the rights of the families of victims.
Elsewhere, Ayatollah Khamenei described the US plan regarding the so-called deal of the century about Palestine as "satanic”, reiterating that they will fail to implement the plan and that the issue of Palestine will never fade into oblivion and the holy city of Quds (Jerusalem) will remain the capital of Palestine.
Prior to the Leader’s statements, Hojat-ol-Islam Seyed Ali Qazi-Askar, the representative of Leader in Hajj and pilgrimage affairs, presented a report on the preparations for Iranian Hajj pilgrims’ participation in this year’s Hajj.
He said efforts have been made to make sure that the demands of the people and Establishment about protecting the Hajj pilgrims’ safety and dignity will be met.
Like last year, more than 85,000 Iranian pilgrims will make the pilgrimage this year.
In May, Head of Iran’s Hajj and Pilgrimage Organization Hamid Mohammadi said dispatching Iranian Hajj pilgrims to Saudi Arabia will begin on July 16.
He said they will be sent to the kingdom in 576 batches, each consisting 85 to 160 individuals.
He added that the Iranian pilgrims will stay in Saudi Arabia between 28 and 45 days, depending on the conditions at Madinah and Jeddah airports.
In 2017, some 85,000 pilgrims from Iran travelled to the holy sites in Saudi Arabia for Hajj.
A year earlier, more than 1.8 million pilgrims attended Hajj, but Iranians stayed at home after tensions between Riyadh and Tehran boiled over following a deadly crush of people during the 2015 pilgrimage.
On September 24, 2015, thousands of people lost their lives in the deadly crush after Saudi authorities blocked a road in Mina during a ritual, forcing large crowds of pilgrims to collide.
The crush was the deadliest incident in the history of the pilgrimage. According to an Associated Press count based on official statements from the 36 countries that lost citizens in the disaster, more than 2,400 pilgrims were killed in the incident.
Saudi Arabia claims nearly 770 people were killed, but officials at Iran’s Hajj and Pilgrimage Organization say about 4,700 people, including over 460 Iranian pilgrims, lost their lives.
Source: IQNA