Tehran (Basirat) :Iran’s Islamic Revolution Guards Corps (IRGC) has launched a missile attack at the headquarters of ISIS terrorists in Syria’s Eastern Euphrates to retaliate the recent terrorist attack in the southern Iranian city of Ahvaz.

The IRGC struck the terrorist ringleaders’ base to Bukamal region east of the Euphrates in Syria with several ground-to-ground ballistic missiles.
Preliminary reports suggest a large number of Takfiri terrorists and elements behind the Ahvaz terror attack were killed or wounded in the missile strike.
The IRGC has reportedly used Qiam and Zulfaqar missiles to hit the terrorists’ positions. A photo of the missiles shows it was written on them: Death to America, Death to Israel, and Death to Al Saud; the three regimes Iran blames for the Ahvaz attack. 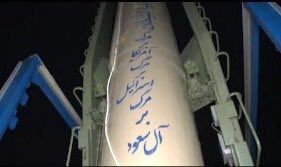