TEHRAN(Basirat): President Trump continued his verbal spat with French leader Emmanuel Macron, taunting the French leader for his country’s losses to Germany in two world wars, and suggesting that Europe needs the US as a saviour. 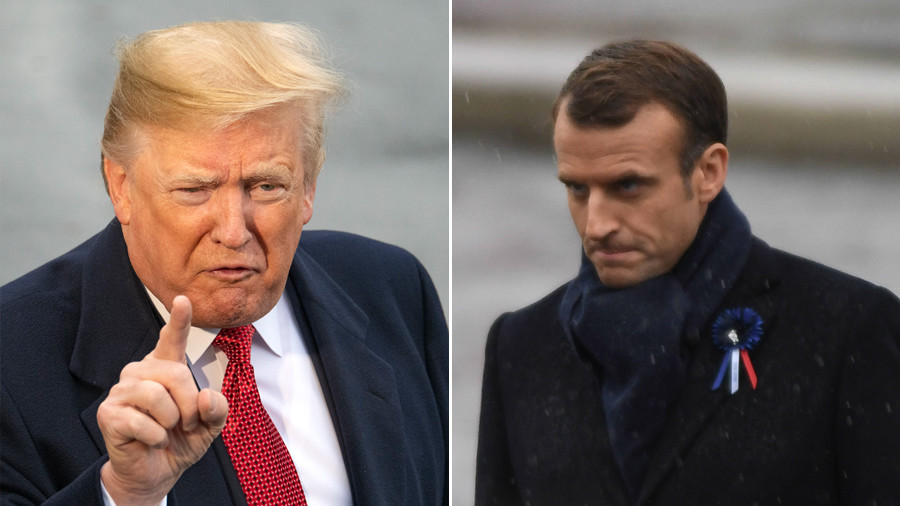 After returning from Armistice Day commemorations in Paris over the weekend, Trump took to Twitter on Monday to savage the US’ European allies for failing to meet their defense spending targets and leaving America to foot much of NATO’s bill. On Tuesday, the president vented his frustrations again.

"Emmanuel Macron suggests building its own army to protect Europe against the U.S., China and Russia,” Trump tweeted.

But it was Germany in World Wars One & Two - How did that work out for France? They were starting to learn German in Paris before the U.S. came along. Pay for NATO or not!

In a radio interview a week before the commemorations in Paris, Macron called for the establishment of an EU army that can defend the continent "without relying only on the United States.”

While Macron once enjoyed a close bond with president Trump, the leaders’ relationship has soured as of late. In a speech on Sunday, Macron emphatically denounced Trump’s brand of nationalism, comparing it to the forces that plunged Europe into conflict in the 20th Century.

"Old demons are resurfacing,” the French president warned. "History sometimes threatens to take its tragic course again and compromise our hope of peace. Let us vow to prioritise peace over everything.”

Macron also stuck close to German Chancellor Angela Merkel - herself a vocal Trump critic - throughout the weekend, with the pair posing in an embrace at the unveiling of a plaque near Compiegne, where Germany officially surrendered 100 years previously.

Whether Trump’s Tuesday tweet was meant as a jibe at Merkel and Macron’s closeness or not is unclear, but the president’s insistence that Europe pays its NATO dues is a call that he has voiced since he hit the campaign trail three years ago.

At present, only five NATO member states – the US, UK, Greece, Estonia, and Poland – allocate two percent of their GDP to defense spending, a requirement for membership. In 2017, the US spent $686 billion on defense, over double the expenditure of all 28 other states combined.

While Macron is now in Trump’s firing line over defense spending, the US president had singled out Germany in the runup to a NATO summit in Brussels in July. As well as savaging Merkel’s government for spending just over 1.2 percent of its GDP on defense, Trump said that Germany is "totally captive to Russia,” referring to its reliance on Russian gas.

While the US underwrites most of Europe’s defense bill, more EU leaders than Macron have expressed discomfort at relying on Trump in recent months. Liberal MEP Guy Verhofstadt - a long-time advocate for a federal Europe - echoed Macron’s comments on Saturday, when he tweeted that Europe cannot be "unprepared for the America First Policy.”

The idea of an integrated EU army might make Macron and Merkel excited, but it has been criticized by more people than just Trump. NATO Secretary General Jens Stoltenberg responded to Macron’s radio interview by warning the French president not to take over NATO’s job.

"Two World Wars and a Cold War taught us the importance of doing things together,” he said at a conference in Berlin on Monday. "The reality is that we need one strong and capable command structure, we can’t divide those resources in two.”