A Tale of Two Cities: Western Governments Can’t Handle the Truth Unless You Speak to Them With a Mirror 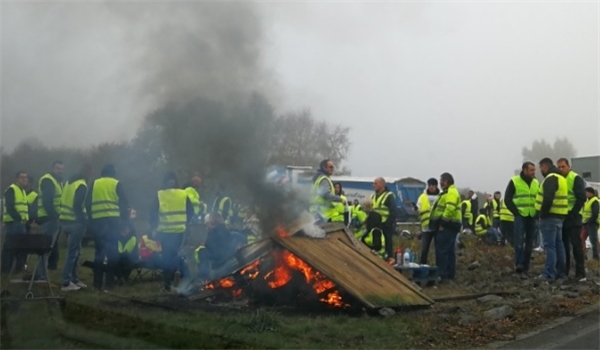 Protesters angry about rising taxes and the high cost of living clash with French riot police, who close off some of the city's most popular tourist areas and fire tear gas and water cannon as they try to quell the mayhem in the streets.

Some might say France is marching toward a new revolution. Not so fast. That’s hardly the case. This is just about so-called "violence” denounced by French President Emmanuel Macron. So those who attack police and vandalize the Arc de Triomphe will be "held responsible for their acts".

Now imagine for a moment that this was all happening in Tehran. All hell would break loose in the West. Western governments would hold an emergency meeting in Brussels on the violent protests, calling it a revolution, while bashing any response from the Iranian government unacceptable, even taking the matter to the UN Security Council for a resolution that would trigger sanctions on Tehran.

But Paris is not Tehran and what is happening there is "violence that has nothing to do with the peaceful expression of a legitimate anger" and "no cause justifies" attacks on police or pillaging stores and burning buildings. Further still, the government of Macron sees no reason to answer any questions from journalists about the situation in Paris - even though this is the third straight weekend of clashes in Paris with activists dressed in the fluorescent yellow vests of a new protest movement and the worst urban violence since at least 2005.

Indeed, the scene and the international reaction sharply contradicts with last year’s guild-related protests in Iran, where because of Western double standards, demonstrations were naively or deliberately considered by Western governments as "a new revolution” that would lead to "regime-change”.

Unlike in France, they condemned Iranian police deployed to try to contain the violence, which were similar to those in Paris about price hikes and unpaid wages. Western governments even voiced their concerns for arresting those involved in violence and burning shops, with little or no care for injured police officers. That’s unlike the way they have all reacted to the ongoing violent clashes in Paris in recent week. They have backed the French government and condemned the protesters.

However, Western governments cannot have a double standard here. They cannot see the violent protests in France as different from the reality, or from those in Iran. They cannot use two different sets of judgment when it comes to a similar violence happening in Paris and Tehran.

It is time they stopped using a double standard for measuring their own and other nations’ policies. Their demands for democratic practices in other lands will be no more effective than the guarantees of those practiced in their own country.