TEHRAN (Basirat): Consider this first: On March 4, the United States military deployed in Israel for the first time its so-called “most advanced missile defense system”. 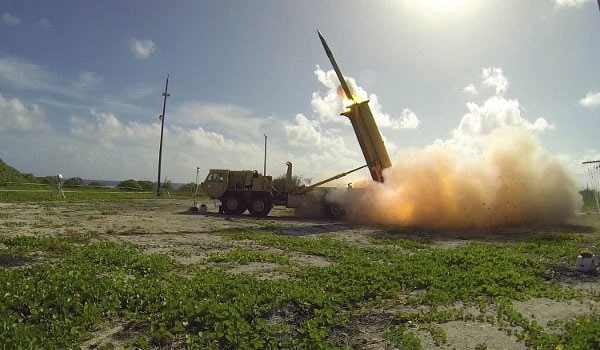 Tel Aviv immediately claimed that the United States European Command’s (EUCOM) deployment of the Terminal High Altitude Area Defense (THAAD) was meant to drill dispatching the system quickly across the world and working together with Israeli air defenses against threats such as long-range ballistic missiles.

In response, the cult of regime changers at the US State Department further tried to justify the sales of THAAD launchers, precision-guided bombs, howitzer artillery pieces, the Terminal High Altitude Area Defense missiles and other goodies as an attempt to help their Arab allies build up their military to "maintain stability”, help defend themselves against what they called "malign Iranian influence", and contribute to counter-terrorism operations across the region.

Funny how the same cult members who claim that "THAAD is the most advanced integrated air and missile defense system in the world, and that this deployment readiness exercise demonstrates that US forces are agile, and can respond quickly and unpredictably to any threat, anywhere, at any time,” are once again accusing Iran of defying a UN Security Council resolution with one ballistic missile test and two satellite launches since December, and urging the council to "bring back tougher international restrictions” on Tehran on the basis of a UN resolution that has been totally neglected and discarded by the US, while Iran has admittedly - according to the remaining parties to the nuclear deal - been and still is in full compliance.

In a letter to the 15-member council, acting US Ambassador to the United Nations Jonathan Cohen says Iran tested a medium-range ballistic missile on December 1, 2018, and attempted to place satellites in orbit on January 15 and Feb. 5. "Iran has carried out these three launches in defiance of the expressed will of the UN Security Council, and such provocations continue to destabilize the entire Middle East region,” Cohen claimed on Thursday.

This is while UN Resolution 2231 that endorsed the 2015 nuclear deal and is part of the agreement between Tehran and the six world powers only "called upon” Iran to refrain from testing ballistic missiles "designed to carry Weapons of Mass Destruction". This is the same "landmark agreement” that President Donald Trump binned last year and re-imposed unilateral sanctions on Iran in great violation of fundamental norms of international law and the fact that it had been endorsed by the UN Security Council.

Here, the argument is not that the US has violated the UN resolution altogether, while the world community has endorsed Iran's full compliance. Nor that the language of the UN resolution does not make it obligatory for Iran to stop testing ballistic missiles. Nor is this about the fact that Iran has no nuclear weapons – as verified in 14 reports by the International Atomic Energy Agency (IAEA) or ever designed any missiles with a WMD payload or any such capability. The question is how come Israel and Arab allies in the region could buy American and non-American ballistic missiles - including Saudi Arabia's China-made ballistic missiles that fly a range of 4,000 to 5,000km - yet Iran, which continues to implement the requirements set by the nuclear agreement and is yet to see its economic benefits including the lifting of sanctions, cannot build and test its own conventional missile defense systems, and/or even test its home-made satellite carriers?

There can be no doubt that Ambassador Cohen’s mind-boggling and hypocritical accusations against Iran at the UN can be used to condemn the Trump White House and State Department officials for their double standards regarding Iran's missile defense program. They are not in a position to preach the world body about the threat of Iranian missiles when they continue to sell THAAD and relevant equipment to Saudi Arabia and the United Arab Emirates.

To add insult to injury, Amnesty International suggests that these regimes are war criminals and those who support them militarily, as well, are complicit in their crimes against humanity in Yemen: "The irresponsible arms flows by the US, the UK, France, and other European countries to the Saudi-led coalition bombing Yemen has inflicted enormous harm to Yemeni civilians.”

These are the same values that Washington and its ambassador at the UN brazenly champion without the slightest regard for human rights, international law and the principles of true democratic values. It should be by now clear that the decision by the Pentagon regime to deploy its so-called "most advanced missile system” in Israel is a marketing strategy and advertising tactic, intended to discourage regional Arab allies from buying Russian S-300, S-400 and S-500 missiles, or similar systems from China.

There can be no doubt that the cult of missile makers and the aging hippies in the Military Industrial Complex are desperate to boost their country's weapons industry in the face of modern competition from Russia and China whose cutting-edge products have rendered the stealth nature of the US masterpiece F-35 and F-22 raptors obsolete. It is not just Syria or Iraq, but even NATO member Turkey, US ally Qatar that hosts the United States' Persian Gulf CentCom, and good customer India that have all purchased the Russian S series. The US has largely lost the Middle East missile defense system arms race to China and Russia. They have also failed to stop Iran from developing and modernizing its own missile defense systems.

This should be enough to convince many countries in the region to buy or consider purchasing S-300, S-400 and S-500 missile systems from Russia and/or similar on the cutting-edge defense systems from China, which are among the best anti-aircraft systems in the world. There are, of course, others like Iran which want to build and develop their own missile defense systems.

On balance, these countries want to cope with modern security threats, and diversify their military. They have come to the conclusion that the US is a menace to world peace and stability – and is behind in both the hypersonic, ballistic and missile defense systems race. The key figures in and around the Trump administration are in the know. But they are wrong to imagine that the abrupt and politically-motivated deployment of THAAD missile systems in Israel might actually reverse this new trend.

There is no question on the planet, as well, that their baseless accusations at the United Nations won’t be able to stop Iran from developing and perfecting its missile defense systems per fundamental norms of international law, the Charter of United Nations and Resolution 2231. Never.