TEHRAN (Basirat) : The Iranians participating in countrywide rallies on the International Quds Day renewed support for Palestinian people, stressing that liberation of the city of al-Quds and all other Palestinian territories from the Zionist occupation is the main goal of the Islamic world. 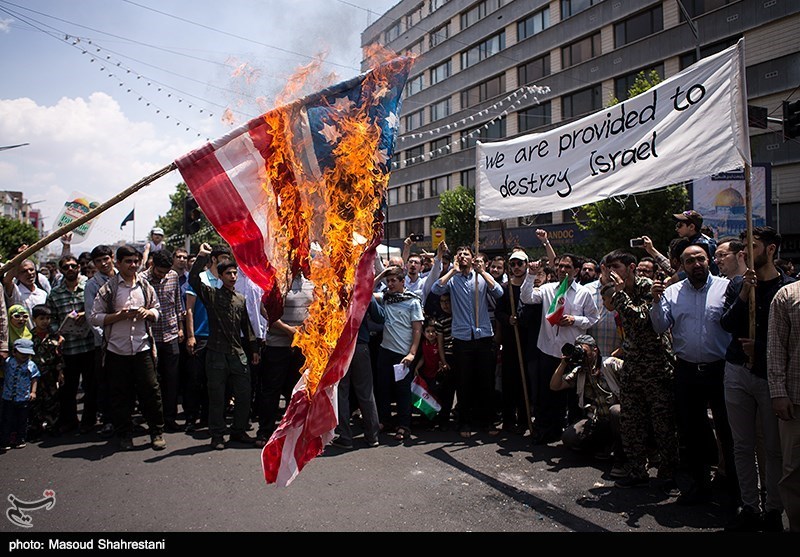 In a final declaration after holding mass rallies in Tehran and hundreds of other cities on Friday, demonstrators in the International Quds Day reaffirmed commitment to supporting the Palestinian people and their cause, and described efforts to liberate the holy city of al-Quds from the Zionist occupation and to wipe off the “cancerous tumor” of Israel as the Islamic Revolution’s primary goals.
They also denounced the US vicious plot, known as the deal of century, and lashed out at the leaders of certain reactionary Arab states for obeying the US polices and trying to normalize ties with the Zionist regime.
According to the resolution, the only way to settle the issue of Palestine is to press ahead with resistance, allow for the return of all displaced Palestinians from around the world to their motherland, and to hold a free referendum to decide the fate of their country.
The ralliers also condemned the international community’s muted response to the Israeli acts of genocide in the Gaza Strip and the West Bank.
Millions of fasting Iranian people from different walks of life poured into the streets on Friday to join the demonstrations in support of Palestinians, who have been suffering from Israel’s atrocities for decades.
Each year, the International Quds Day is celebrated on the last Friday of the Islamic holy month of Ramadan.
The event’s raison d'être is renewing support for the Palestinians and denunciation of Israel.
The day is also seen as the legacy of the late founder of the Islamic Republic of Iran, Imam Khomeini, who officially declared the last Friday of the holy month of Ramadan as International Quds Day back in 1979.
In comments on Wednesday, Leader of the Islamic Revolution Ayatollah Seyed Ali Khamenei described the International Quds Day as “the symbol of fighting Arrogance and global hegemons”.
This year’s Quds Day was marked against a backdrop of growing anti-US and anti-Israeli sentiments among Muslims, aggravated by the White House’s push to hammer out what it calls a peace deal between Palestine and Israel, known as the “deal of century”.
In comments at the Quds Day rallies in Tehran on Friday, President of Iran Hassan Rouhani stressed that the US-drafted deal of the century will end up as the ‘bankruptcy of the century’.