TEHRAN(Basirat): Jack Straw, the former British foreign secretary, has written an article saying that Iranians have “good cause” to be “resentful” against Britain and call Britons the “cunning, colonial fox”.

In his article published in the Daily Mail on Sunday, Straw gives reasons why the Iranians will never trust Britons.

Following is the text of the article:

In October 2015, my wife Alice and I were visiting Iran on holiday with friends. Rarely seen by Western tourists, the country offers both dramatic scenery and wonderful cultural sites. We’d hired an interpreter and a driver and by the sixth day of our trip had visited the busy capital Tehran and Yazd, a desert city in the south.

Then, on our way to Shiraz, the heart of the country’s rich Persian culture, we stopped halfway to see a celebrated 4,000-year-old cypress tree, the Sarv-e Abarkuh.
That’s when we met the Basij, the volunteer militia attached to Iran’s Revolutionary Guard Corps (IRGC). The black-clad young men were lying in wait for us, ready with a two-page petition.

‘Although it is in our tradition as Iranians to welcome guests, this “welcome” gesture does not apply to you!’ it began. ‘The people of Iran do not have good memories about you and the British regime… ‘You know better than us about the crimes and the ample plots that were orchestrated by your country against the people of this land.’

The document then set out in detail all the terrible things Britain had done to Iran, going back to the 1857 Treaty of Paris and the Anglo-Persian war.

This encounter was the start of a sustained campaign to make our trip as difficult as possible. At one point, we feared we would be kidnapped.
It turned out the men knew our itinerary from the IRGC, which had bugged our vehicle, intercepted our interpreter’s mobile phone and bribed our driver. They knew exactly who I was. So serious was the risk judged to be, in fact, that we were given police protection – not against criminals or terrorists, but against the Basij and other agencies of the Iranian state. In the end, the hardliners won and we felt obliged leave four days early.

Yet I still have huge affection for the Iranian people. I’ve been back since and have now written a book about why Iran so distrusts the West and Britain in particular.

If we are to solve the current Gulf crisis in the Strait of Hormuz, then it is crucial to understand our shared history and why Iran today behaves as it does.

The book is called The English Job, for example, because of a ubiquitous phrase in Persian – ‘it’s always an English job’ – which Iranians use when things go wrong.

They have good cause to be resentful against the ‘cunning, colonial fox’, as they describe us. Iran never was a British colony but that didn’t stop us exploiting the country for treasure and power.

At least our colonies got roads, sewers and railways. Quite the opposite was the case in Iran. Britain and Russia, after competing with each other for control of the country, eventually struck a deal which stopped all railway building right up until the 1920s.

We bribed and cajoled Iran to do our will throughout the 19th Century and early part of the 20th Century and, if that didn’t work, we landed troops.

We invaded Iran in the First World War, helping cause a catastrophic famine in the process. In the Second World War, with the Russians, we jointly occupied the country for five years from 1941-6.

We deposed a Shah in 1941 and installed his weaker, more compliant son.

When the Iranian parliament waged an eight-year struggle to nationalise BP’s huge refinery and vast network of oil wells, MI6 and the CIA responded by organising a successful coup against the elected prime minister, Mohammad Mossadegh, in August 1953. 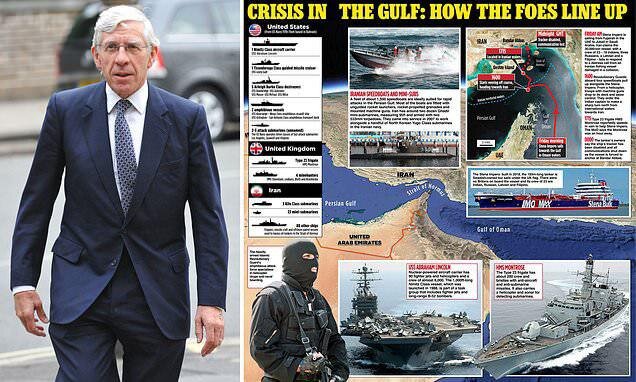 We helped prop up the Shah in the mid and late 1970s, even when it was obvious that he was losing popular support. Catastrophically so, in fact. In 1979, Mohammad Reza Pahlavi was overthrown in a revolution led by Ayatollah Khomeini and that, in turn, led directly to the start of the Islamic Republic of Iran.

But the worst was to come in 1980, when Iraq’s newly appointed president, Saddam Hussein, decided, without any justification, to invade Iran. Millions on both sides lost their lives in the bloody war that followed.

The whole of the West – America, France, the UK and Russia – backed Iraq (with only Israel, improbably, supporting Iran). For eight years, Iran was effectively alone. It managed to avoid abject defeat, but this searing experience has defined everything that has happened since and shaped the attitude of those in power today.

Iran’s Supreme Leader since 1989, Ali Khamenei, never ceases to preach that the West cannot be trusted. In 1980, he came close to being assassinated by a renegade Iranian terrorist group, the Mujahedin-e Khalq – once supported by Saddam and now by John Bolton, President Trump’s national security adviser – and lost the use of his right arm.

The single most powerful military figure in Iran is Major-General Qasem Soleimani, the man behind the Revolutionary Guards’ seizure of the British-flagged tanker. His world view, too, was forged in the crucible of the war with Saddam.

It’s Khamenei and Soleimani who now call the shots, both literally and figuratively. Iran, in their view, is fighting for its very survival.

Bolton calculates that by strangling Iran through sanctions, the Islamic revolutionary regime will collapse and the government, led by President Rouhani, will come begging for a deal.

This approach won’t work. It is based upon a complete misunderstanding of the Iranian psyche. Already, American pressure has strengthened hardliners… and has weakened moderates…. An often discontented population has been unified. After two centuries of humiliation, what Iran seeks above all is respect and recognition.

As I know, having been involved for three years in negotiating the first phase of nuclear talks with Iran (2003-6), if Iran is shown that respect, a deal is possible.
Without that, the cat and mouse game in the Gulf and continued instability in the wider Middle East will continue.

We may not like the way Iran is behaving but comprehending why they do so could prove critical.