France’s Mission in New Round of Talks over JCPOA

Each of these developments is, in fact, a unique one involving major actors and their allies: Yemen developments, political and security developments between the so-called resistance movements with aggressive and opposing actors, tensions created by regional and international powers in the Persian Gulf, trade war between China and the US, tensions between the US and North Korea, and finally tensions between Iran and the West over the 2015 nuclear deal, officially known as the JCPOA.
Among the issues mentioned, the most important one is the negotiations of the Islamic Republic of Iran with the Western countries and the United States over the fulfillment of mutual obligations under the JCPOA.
Part of this important and influential issue, which is Iran's commitments under the deal, has been fulfilled. Iran has reduced enrichment from 20 percent to three and a half percent, loaded the Arak heavy water reactor with concrete and actually shut it down, removed centrifuges in Fordow and changed the facility from an enrichment center to a research center.
In sum, Iran has fulfilled all its commitments, and international inspectors and observers have confirmed it, but the US and European powers have not only failed to fulfil their obligations, but the Trump administration withdrew from this international agreement and actually violated it.
Notable among the reactions was the reaction of the European countries. Not only did they not condemn the US’ unlawful action, but they also implicitly accompanied Trump in setting forth new issues and his bid to redefine the JCPOA. The Islamic Republic of Iran, after several years of strategic patience and observing its legal and ethical commitments under the deal, has taken two steps to return to the pre-deal situation.
Iran's actions and its threat to take the third step prompted Western nations, which had violated all of the provisions of the JCPOA, to launch new efforts to persuade Iran.
I will elaborate on the reasons and the contents of the new negotiations in the future, but in this brief review, I will discuss why France came forward to negotiate with Iran after Britain, Oman and Japan.
The key question in this regard is why France should assume the role of mediator between Iran and the United States in the new situation. Is France in the position of an independent actor in this period, or is it an actor which is following the US policies and recommendations and has entered the game on behalf of the US? 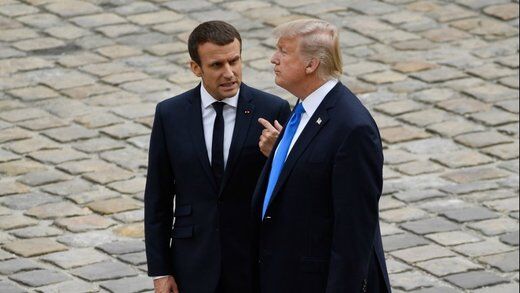 In response to the question of why France has accepted the role of mediator in the negotiations at this juncture and is trying to force Iran to renegotiate the deal, it should be noted that France is a member of the European Union which has always played the role of a US ally. France has always entered the game on behalf of the US when it comes to common interests and threats.France used to play the role of a bad cop during previous negotiations that led to the JCPOA, but in the new circumstances, it is trying to portray itself as a good cop. A number of important factors have made Paris prefer the role of a mediator rather than the bad cop and enter the game after numerous mediations:
Most of the regional developments designed within the context of the Western and Arab scenarios have either come to an end or are at their final stages; scenarios such as the crisis in Syria, Iraq, etc. Of course, none of these developments resulted in the objectives that Western and Arab countries were pursuing. All of these crises ended as Iran and its regional allies wanted. It means that the costly and damaging strategies of the anti-Iran front totally failed. This failure means the collapse of a US-led regional and global front against Iran. In fact
, in the war of strategies, it was Iran's strategy that showed its power to the world.
Tehran has adopted a revolutionary and aggressive counter-strategy on the issue of nuclear deal after years of strategic patience in face of the failure of the US and European countries in fulfilling their JCPOA commitments. In fact, the Islamic Republic showed a balance of pressure by adopting a revolutionary approach in its diplomacy backed by its regional victories. The world saw the apex of this political authority during the meeting of Iran’s leader with the Japanese Prime Minister. The steps taken by Iran to return to the pre-JCPOA situation also completed this balance. This was an important factor in destroying the assumptions of the countries that were against Iran.
Another important issue that prompted the US to choose France for the new negotiations was the demonstration of Iran's power in the physical confrontations that took place in the strategic waterway of the Persian Gulf. The West understood that Iran is not a country like Gaddafi’s Libya or Saddam's Iraq. They realized that Iran will not easily give in to political and economic pressure and cannot be defeated by a Trojan horse. Iran's authority at sea and air forces France to play the role of a good cop. France, in fact, is a soldier working for the United States and its mission is to make up for the strategic failures.
In scenarios designed by the US-led Western front and supported by some Arab countries, destabilization of Iran was on the agenda. This front accepted to pay a heavy political price, especially after it was disclosed that certain media outlets had been tasked with carrying out anti-Iran media operations. That is why in the atmosphere of psychological and media operations, there was always talk of a “hot summer” in Iran, and they expected a nationwide uprising to happen, but the summer came to an end and nothing happened. Just like all the other political, security and military assumptions, this one also failed and their chain of failures completed. Therefore,they found the solution in approaching Iran, because they realized that the only way to choke Iran is to get closer to it. So, negotiation was the best way to get closer to Iran. For Westerners, it is important to bring Iran back to the negotiating table after playing with Iran for years. They think if they can get Iran back to the negotiating table, Tehran will no longer be able to manage the talks, because they (Westerners) have learned in the first round that Iran can be managed once it is dragged into the negotiating table, and in the light of some similar JCPOA commitments the West can control Iran’s movements.
The final point is that the Iranians could not benefit from the nuclear deal or even force the other party to fulfill its obligations. In the new circumstances, Iran has chosen a path that is not different from the negotiations held for the JCPOA. The West is trying to stop Iran’s return to pre-deal situation in the new round of talks. It means that by talking of returning Washington to the agreement they want to lead Iran into a new cycle of giving more concessions.