TEHRAN (Basirat) : Major General Yahya Rahim Safavi, a top military aide to the Leader of the Islamic Revolution, warned that if the US thinks of any plots against Iran, the Islamic Republic will respond from an area extending from the Mediterranean to the Indian Ocean. 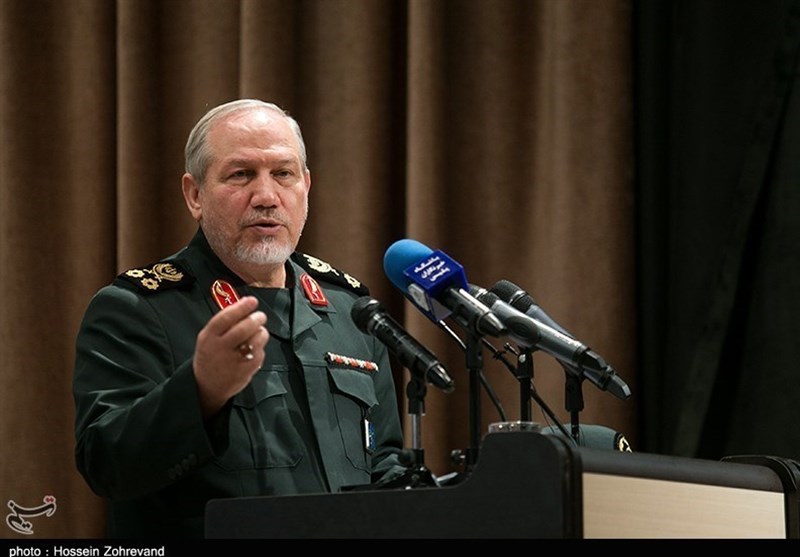 “With the grace of God and thanks to the vigilance and patience of the great Iranian nation and the unforgettable sacrifices of 200,000 martyrs…, the Iranian nation has become an invincible regional power in West Asia,” Major General Rahim Safavi said, addressing a gathering of worshippers in Tehran on Friday.
“If the Americans think of any conspiracy, we will respond from the Mediterranean to the Red Sea to the Indian Ocean,” he added.
“Any anti-Iranian move will overturn the region,” the top official warned, adding that the Americans know well that Iran is enjoying a brave leader and powerful armed forces.
“Our policy is to create lasting peace and security in the region and (seek) the withdrawal of foreign forces, and we hope that our trans-regional enemies would know that Iran does not intend to invade (other countries) or expand its territory,” he went on to say.
The remarks came against the backdrop of increased tensions between Iran and the US after the Islamic Republic shot down an advanced US spy drone over its territorial waters and also recent attacks by Yemeni forces on Saudi oil facilities, with Washington and Riyadh claiming Iran was behind them.
The Islamic Revolution Guards Corps (IRGC) said on June 20 that a US spy drone that violated the Iranian territorial airspace in the early hours of the day was shot down by the IRGC Aerospace Force’s air defense unit near the Kooh-e-Mobarak region in the southern province of Hormozgan.
The intruding drone was reportedly shot by Iran’s homegrown air defense missile system “Khordad-3rd”.
Tensions between the US and Iran escalated further after Yemeni armed forces conducted a large-scale operation against Saudi Arabia’s Aramco oil installations on Saturday, in response to the Saudi-led war on their country.
The Yemeni Houthi Ansarullah movement immediately took credit for the attacks, but US Secretary of State Mike Pompeo swiftly accused Iran of being behind the assault, without providing any evidence. Tehran categorically rejected the allegations.
Meanwhile, Saudi Arabia claimed on Wednesday that the strikes on its oil infrastructure came from the “north” and were “unquestionably” sponsored by Iran, adding that the Houthis were not responsible for the assault despite claiming it.
Shortly after the Saudi announcement, the spokesman for Yemeni Armed Forces, however, reiterated it was behind the weekend attack, stressing that the Houthis have new drones, powered by “normal and jet engines” that can reach targets deep in Saudi Arabia.
“Our forces have reached a high level of efficiency and ability. They can manufacture various types of unmanned aerial vehicles in record time. The Second Deterrent Balance Operation, which targeted Saudi oil installations, is a perfect example of the capabilities of our forces in terms of planning and implementation,” Brigadier General Yahya Saree said during a press conference in the capital Sana’a.