TEHRAN (Basirat) : Chief of Staff of the Iranian Armed Forces warned the US that any new evil act will draw Iran’s “stronger, more crushing, and broader” response, hours after the IRGC stormed two US military bases in Iraq in retaliation for the assassination of Lt. General Qassem Soleimani. 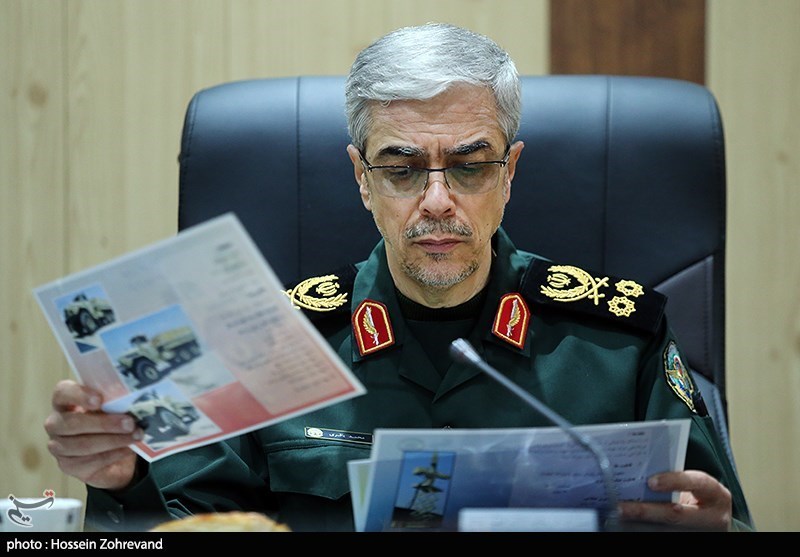 In a statement on Wednesday morning, Major General Mohammad Hossein Baqeri said the missile attacks by the IRGC Aerospace Force in the early hours of Wednesday against the US military bases in Iraq gave a warning to the “terrorist US regime’s” authorities.
He said the attacks on the American forces in Iraq revealed only a tiny part of the capabilities of the Iranian Armed Forces and was carried out in response to the US terrorist move to assassinate General Soleimani.
“From now on, any new evil act by the US will face a stronger and more crushing response with a broader range,” the senior Iranian general added.
“The time has come for the evil authorities of the United States to realize the Islamic Republic of Iran’s capabilities in a greater extent of global geography, adopt a principled approach, and pull the forces of their terrorist army out of the region as soon as possible,” Baqeri underlined.
In the early hours of Wednesday, the IRGC targeted two US airbases in Iraq, including the US airbase of Ain al-Assad in Anbar province in western Iraq, in retaliation for the US assassination of top Iranian anti-terror commander, General Soleimani.

Source:Tasnim
Rouhani to U.S.: ‘Your foot will be cut from the region’
FM: Iran's Revenge Entails US Pullout from Region
Source: At Least 80 Americans Killed in IRGC Attack on US Base in Iraq
Iran’s Admin. Thanks IRGC for Retaliatory Attacks on US
Last night’s action was merely a slap, but the U.S. must leave the region
General Soleimani's Body Laid to Rest in His Hometown
Iran Hits US Base in Iraq in Retaliation Attacks after US Killing of Gen. Soleimani
Tags: basirat ، General Qassem Soleimani ، IRGC ، General Mohammad Hossein Baqeri ، US terrorist ، Ain al-Assad
Error Report
0