Abbas Says Palestine Severing All Ties with US, Israel over Trump's 'Deal of Century'

TEHRAN(Basirat): Palestinian self-rule authority head Mahmoud Abbas threatened to cut security ties with both Israel and the US, in a furious speech delivered at the Arab League meeting in Egypt's capital that denounced the White House's so-called peace plan for ending the Israeli-Palestinian conflict. 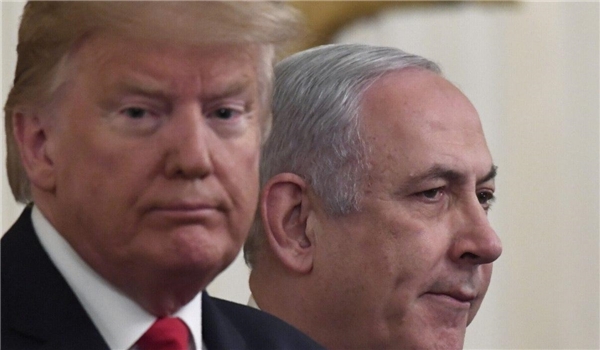 The Arab League held an emergency meeting in Cairo on Saturday to discuss US President Donald Trump's so-called peace plan for the Middle East that was unveiled last week. The meeting was requested by Abbas, who asked Arab nations to take a clear stance against "Deal of the Century".

In his speech before other members, Abbas criticized Trump and Israeli Prime Minister Benjamin Netanyahu, and announced cutting of ties with both nations following the deal that Palestinians say heavily favors Israel.

"I reject this plan outright," Abbas said, adding, “I will never accept this solution. I will not have it recorded in my history that I have sold Jerusalem."

Trump revealed his plan on Tuesday with Netanyahu standing by his side at the White House. The US leader said Jerusalem would remain the "undivided capital" of Israel, adding that this has "already been done".

Abbas noted that the Trump's proposal can't be the basis for a future peace deal with Israel under any conditions.

"They told me Trump wants to send me 'Deal of the Century' to read, I said I would not," Abbas told the meeting of Arab League foreign ministers, adding, "Trump asked that I speak to him over the phone, so I said 'No', and that he wants to send me a letter, so I refused to receive it."

The Palestinian leader stressed that he'd refused to take Trump's phone calls and messages “because I know that he would use that to say he consulted us”.

Abbas said that the Palestinians wouldn't accept the US as a sole mediator in any negotiations with Israel, stating that they would go to the United Nations Security Council and other world and regional organizations to “explain our position".

"There is no place for even a part of the American deal on the negotiating table", the Palestinian president added.

Abbas Warns to End Oslo Accords with Israel Due to Trump's Planhttps://t.co/c8CHUkeQLD pic.twitter.com/wLQ3ZJPk34

Abbas had slammed Trump’s scheme, declaring “Jerusalem is not for sale” and warning that the “conspiracy deal will not pass”.

Protesters across Palestinian territories and in several other countries have sit the streets to vent their anger at Trump’s scheme that allows the Israeli regime to consolidate its occupation of Palestinian land.

The unveiling of the Israeli-US plan for the region comes at a crucial moment for Trump and Netanyahu, both of whom are facing upcoming elections and domestic tensions.

In addition to moving the US embassy to Jerusalem, the Trump administration has also slashed hundreds of millions of dollars in humanitarian aid to the Palestinians and recognised Israeli sovereignty over the Israel-occupied Golan Heights. Palestinians have previously stressed that the US cannot be an honest broker for peace in the region, accusing it of pro-Israel bias.