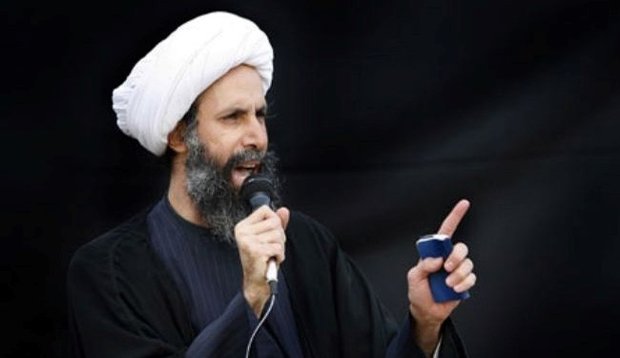 While most parts of the world are celebrating the New Year amid fears of extremism and terrorism and wish for peace and stability all around the world, Saudi authorities have once again taken a dictatorial measures by executing a religious leader.

On Saturday, Interior Ministry of Saudi Arabia announced that 47 people were executed on charges of ‘terrorism’ among which the Shia prominent leader Sheikh Nimr Baqer al-Nimr was also named. Saudi officials have put his name in a list most of whom were connected to Al-Qaeda or similar terrorist groups, while Shiekh Nimr has ever been included in any terrorist act or even any activity but peaceful opposition. During the height of unrests in Middle East named as Arab Spring or Islamic Awakening, Sheikh Nimr who gained momentum as opposition leader urged protesters to respond to Saudi police brutality by "the roar of the word” rather than violence.

Nimr Baqr al-Nimr was arrested in summer of 2012 and the court accused him of creating discord and disruption in the Saudi National Security, and called for his execution on the trial held on March 26, 2013 which caused Human Rights Watch’s strong criticism for ‘unfair trial’ and possible execution order. The death sentence was officially issued on mid-October 2014 since when many countries, international organizations and NGOs have been calling for release of Shiekh Nimr and warned Saudis against the consequences of the execution. Iranian deputy FM has already warned that execution of Sheikh Nimr will cost Riyadh dearly.

The adventurism of young Saudi officials in fatal suppression of oppositions comes amid tension in a volatile region in which Riyadh is aggressively involved in attacks on Yemen and support for terrorist groups in Syria. While long-lasting dictatorship of Arab authorities in Tunisia, Libya, Egypt and Yemen came to an end in recent years by popular protests, Saudi Arabia has so far been on the brink of such unrests and has tried to prevent it by oppressing any opposition, and of course, trying to shift the unrest to other places, namely Syria. It is by now clear by several evidence to everyone that Saudi Arabia along with the US, Qatar and Turkey have been aware of formation of terrorist groups in Syria and not only have they turned blind eye to it, but also have supported them.

When in early stages of terrorist attacks in Syria, Damascus provided evidence that third parties rather than Syrian army or opposition are conducting gun battles and shooting at UN inspectors, Saudis were among the states who insistently denied the existence of terrorist groups in Syria and when ISIL emerged in 2014, the documents gradually proved their advance intelligence about the group and the support they provide them ‘in order to topple Bashar Assad’.

It is by now, crystal clear that Riyadh has invested all its eggs in the basket of rivalry with the Islamic Republic of Iran’s upper hand in the region. Saudi Arabia which has for decades benefited from huge oil incomes and has spent the money to satisfy its consumerism rather than development of infrastructures and knowledge-based technology in its country, has now realized that a strategic country like Iran, which has had a Revolution less than four decades ago, has experienced 8 years of devastating war, which was inflicted upon it by US- and Saudi-backed former Iraqi dictator Saddam Hussein, and has been under so-called crippling sanctions for decades, is pioneering in the region in terms of development in science and technology and it is posed to boost its foreign relations and its role in international scene. This fact has been so irritating that has brought the Saudi officials to miscalculations in the region and the future of their own country. By supporting terrorists in Syria and attacking Yemen – under fatuous pretext of ‘restoring democracy’ to the country – Riyadh has been trying to play a regional role to undermine Iran’s role and influence. Moreover, bitter incidents such as assault on two Iranian teenagers in Jeddah airport and Mina tragedy which resulted in killing of thousands of people, hundreds of them Iranians, along with occasional remarks by Saudi foreign minister and other officials against Iran, seem to be irritating measures to stir reactions from Tehran. In other words, Riyadh would like to engage Iran with conflicts in the region to decline its power.

Another instance of such measures can be seen in oil market. Some analysts believe that Saudi Arabia and the United States have joined hands to decrease oil prices to prevent Iran from spending on what the west believes is support for groups such as Hezbollah in Lebanon or Ansarallah in Yemen. Riyadh has so far been the main opponent to price balancing measures provided by Iran and other OPEC members which strengthens this idea.

Yet, another issue which must be highlighted in reviewing Riyadh policies in the region is its common objectives with Ankara. Turkey and Saudi Arabia are clearly supporting terrorist and extremist groups in Syria and Iraq and as Moscow has proved through several documents and evidence, Ankara has the lion’s share in buying Syrian oil stolen by ISIL and sold in black market for $7 per barrel. What is important about this joint venture between Riyadh and Ankara is Turkish President Recep Tayyip Erdoğan’s recent visit to Riyadh. Erdoğan and King Salman met earlier this week and discussed their so-called anti-Takfiri coalition which is supposed to target Takfiri terrorists in Syria. However, the Wahabbi extremist ideology in Saudi Arabia and the full-scale support by Ankara significantly aids terrorists groups in the region. King Salman is seeking to undermine Iran’s power to improve its country’s devastated status in the region and Erdoğan is following his high dream of Sultanism and Ottoman Empire revival in 21st century.

Execution of Sheikh Nimr Baqir al-Nimr right after this visit can signal what the meeting’s outcome has been and what Ankara and Riyadh are planning to compensate their failures in Syria and Yemen. With ISIL suffering huge damages in Iraq by losing al-Ramadi and in Syria through Russian successful airstrikes, the two countries who are exploiting instability in the region, have now begun a new phase of their game with fire by executing Sheikh Nimr and provoking sentiments among Shias and freedom seekers in the region.

Riyadh and Ankara seem to have repeated their miscalculations by seeking violence from Shias and protesters in the region to seize the opportunity to brutally suppress them and involve Iran in another game. But Tehran has insisted it follows good-neighborly policy and improvement of ties with the world. Therefore, such adventurism by Riyadh and Ankara would have no more results than increasing instability in the region and destabilizing their own currently troubled countries in near future.(reference:MNA)
Sheikh Nimr
Protesters attack Saudi embassy in Tehran
Saudis to get stuck in Nimr’s martyrdom
Saudis playing with fire by killing Nimr
IRGC condemns Sheikh Nimr execution
Hometown of Executed Saudi Cleric in Turmoil
World Muslims Rise to Condemn Execution of Sheikh Nimr by S. Arabia
Tags: sudi arbia ، execution ، nimr
Error Report
0