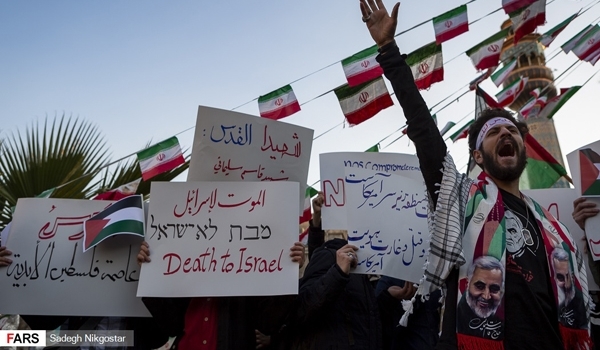 Not surprisingly, the Palestinians have rejected the Trump plan, which heavily favors Israel and would allow it to annex all of its illegal settlements, along with the Jordan Valley, in the occupied West Bank. The Palestinians were offered limited self-rule in Gaza, parts of the West Bank and some sparsely populated areas in return for meeting a long list of conditions.

The much-ballyhooed US Middle East peace plan, which heavily favors Israel, says the status quo should “continue uninterrupted”. But the plan also says “people of every faith should be permitted to pray in the Haram al-Sharif, in a manner that is fully respectful to their religion, taking into account the times of each religion’s prayers and holidays, as well as other religious factors.”

The site is part of the famed Old City in East Jerusalem Al-Quds, which Israel occupied, along with the West Bank and Gaza, in the 1967 war. The Palestinians view Al-Quds as their capital and want all three territories to be included in their future state. Trump’s Mideast plan would situate the Palestinian capital on the outskirts of the city, beyond the apartheid wall built by Israel. In other words, Al-Quds, including the Old City, would be Israel’s capital.

Translation: The much-ballyhooed plan which legitimizes, entrenches and even expands the scope of Israel’s human rights abuses, perpetuated now for over 52 years, is utterly unacceptable. This is not a peace initiative, as it never seeks to restore the rights of the Palestinians or resolve the core issues of the conflict – occupation.

Rather, it seeks to unilaterally implement a permanent status reality that is tantamount to the extreme reaches of the Israeli political spectrum, with the imprimatur of US recognition and legitimacy. It’s not that hard to recognize that it cannot possibly serve as a basis of negotiations, let alone a negotiated settlement, because it prejudges virtually every Palestinian right, claim, and interest.

The references to negotiations are no more than a diplomatic fig leaf to enable Israelis to proceed unilaterally with acts of territorial annexation, the liquidation of the refugee question, and the transfer of Arab citizens of Israel to Palestinian jurisdiction. Indeed, it is a complete American acquiescence to the right-wing mentality that has ruled occupied Palestine for decades.

This is certainly not an American peace overture, but an egregious act of bullying. However, it is hardly a deviation from previous rounds of “peace-making,” where Washington always took Israel’s side, blamed Palestinians and failed to hold Tel Aviv accountable to its violations of previously signed treaties and international law.

In truth, this is not a ‘peace plan’, nor was it ever intended to be, despite what its chief architect and White House adviser Jared Kushner has been claiming. As expected, Trump has handed Benjamin Netanyahu everything that he and the Zionist regime ever wanted – not the uprooting of a single illegal settlement and recognizing Al-Quds as Israel’s ‘undivided’ capital.

In a brutally frank comment, it says to the Palestinians that they have lost and they should get over it. The plan is also not a framework for a two-state settlement. More broadly, it seeks to replace international law and the international consensus with the principle that might makes right and thus the law of the jungle in which power is the sole principle for the resolution of international disputes.

The powerful conclusion is that Palestinians have no choice but to reject the plan and resist Israeli occupation and US-backed state terror, given that a just and peaceful future in Palestine cannot be achieved with Washington at the helm, especially while Palestinians continue to live in perpetual suffering. The Zionist discourse, predicated on maximum territorial gains with minimal Palestinian presence, must be resisted at all costs.