TEHRAN(Basirat): Leonid Savin, Journalist and Geopolitical analyst, says the joint military exercise in the Persian Gulf sent a “clear message to the outsiders” that the security of the Strait of Hormuz and Gulf of Oman can be properly maintained by the region states. 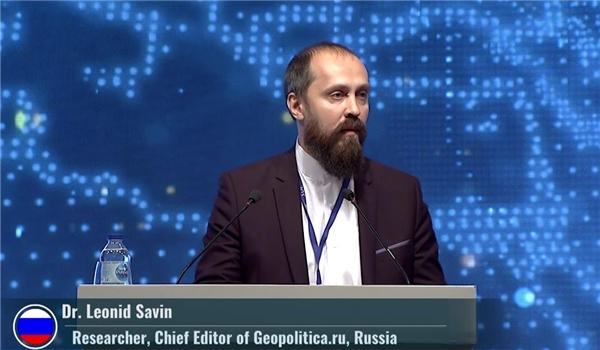 In an exclusive interview with FNA, Savin said, “The Strait of Hormuz is a very narrow place… Any small incidents may lead to a domino effect with serious consequences. The current geopolitical turbulence was an opportunity for the non-state actors… It is potentially a crossroad for both hybrid and conventional future wars.”

Leonid Savin is a Member of the Military-Scientific Society of the Russian Ministry of Defense. He is also the Chief Editor of Geopolitica.ru, the Founder and Chief Editor of Journal of Eurasian Affairs. He has authored numerous books which have been translated and published in Russia, Ukraine, Serbia, Spain and Iran.

Q: The Gulf of Oman was a focal point of geopolitical tensions, namely the tanker attacks, British oil tanker seizure and the US drone hunt, in 2019. Why do the Gulf of Oman and Strait of Hormuz play an important role in the security of international maritime trade?

A: The point is that main routes of oil trade from region pass through this critical point. And there are countries with main global oil and gas resources. We need to note that the Suez Channel connects European, African and Asian maritime routes and all of them also pass through the Persian Gulf. The rise of Asian economics has also impacted this maritime transport node. Carter’s doctrine about vital interests of United States in region is also still active. Just add the geopolitical rivalry between main actors there (for example Iran and Saudi Arabia) and bilateral agreements between US and its regional allies; you will get the complete picture.

The Strait of Hormuz is a very narrow place. From the technical point of view any small incidents may lead to a domino effect with serious consequences. The current geopolitical turbulence was an opportunity for the non-state actors, which are considered proxy by some states in this region; it is potentially a crossroad for both hybrid and conventional future wars.

From the viewpoint of classical geopolitics, the Persian Gulf is a part of Eurasian rimland that can play a very crucial role and serve the both sides: for the Eurasia and Atlantic Sea Powers (historically British Empire and later United States). When land powers meet sea powers in such place, the clash is very possible due to the conflict of interests.

Q: The Foreign Ministers of Iran and Russia said their countries are pursuing initiatives to establish collective security in the Persian Gulf region. Is there any room left for the “Sea Powers” to claim the responsibility of the region’s security?

A: The joint drills of Iran, Russia and China were very essential. At first, it was needed for the coordination among the states. It also promoted multipolar world order as well as presenting very clear message for outsiders and regional actors. More joint maneuvers in the future should be repeated even in larger scales. Besides Navy, Air-Space Forces, Ground Forces and Special Operation Forces also may be integrated.

But there is political level too. Step by step we must adopt a new strategy and doctrine that will be acceptable for local countries and main Eurasian powers. For the moment, we can sign a kind of memorandum of understanding and start negotiation process with all interested sides. Russia can be effective mediator for engaging more states into a new regional deal. This is also the case with China. They should develop an action plan for a negative scenario, to organize the counter-measures against any threats to the security of our own and partners’ vessels.