TEHRAN(Basirat): Just like Muslim nations and the rest of the international civil society, the European Union has also rejected the new US peace plan for the Middle East, saying the plan broke with "internationally agreed parameters", and any Israeli annexation of Palestinian land would be subject to challenge. 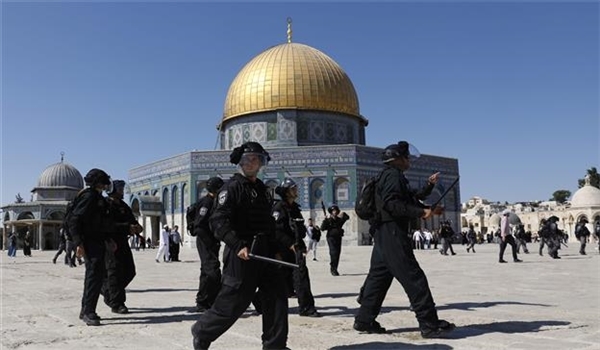 President Donald Trump's plan, also rejected outright by the Palestinians, seeks to give Israel most of what it has sought during decades of conflict, including nearly all Palestinian land on which it has built illegal settlements.

There are many reasons why the world rejects the apartheid plan.

The timing of the announcement was aimed at bolstering the political base of both Trump and Netanyahu - Trump embroiled in an impeachment battle was trying to appease pro-Israeli evangelical Christian voters, a key component of his support base, while Netanyahu used the occasion to go one-up over his political rivals.

The plan they unveiled promotes anything but peace and is an agenda to legalise Israel’s illegal land grab on the West Bank. No wonder peace analysts are unanimous in condemning the Trump plan as ‘dead on arrival’.

It is one-sided and a travesty of justice in breach of international law which requires that the other side also be listened to. There was no Palestinian side in this ruling that Trump’s pro-Israeli son-in-law Jared Kushner was instrumental in drafting.

If there is one US president who has displayed his lack of care for the Palestinians, it is Trump. He stopped aid to Palestine and his country’s annual contribution to the United Nations Relief Work Agency which cares for more than five million Palestinian refugees. Trump, Kushner and Netanyahu could not find a single Palestinian to endorse the plan made by Zionists for Zionists to continue their crimes in Palestine.

Pro-American Arab states, however, welcomed the plan but avoided extending support for the content of the plan. Key regional powers Turkey and Iran, meanwhile, have given an outright thumbs-down to Trump’s plan, which declares Jerusalem as the undivided capital of Israel, thus ignoring the Palestinians’ right to have Jerusalem Al-Quds as their capital.

The Palestinians have also dismissed the plan as Balfour 2.0, whereby one country (the United States) is trying to hand over chunks of another’s country (Palestine) to a third country (Israel) just as Britain in 1917, through an atrocious colonial act of injustice, allowed the Zionist movement to occupy Palestine.

At any rate, the Trump plan will leave the Palestinians with a mere 15 percent of historic Palestine. In other words, 85 percent of Palestine will come under Israel’s control.

Trump’s plan was conveyed to Arab leaders more than two years ago. This came after the Trump administration recognized Jerusalem as Israel’s undivided capital. At the US-sponsored Middle East economic conference in Bahrain in June last year, the plan was unveiled by Kushner.

It’s a shame that the Arab leaders didn’t reject the apartheid plan two years ago. It’s also a greater shame that they now welcome the plan as a “peace plan”, which in fact only promotes further chaos and bloodshed in the Holy Land.

They know and the whole world knows that the plan ignores international law, UN resolutions and principles of justice for the long-suffering people of Palestine.