TEHRAN(Basirat): Nested on top of a hill in a relatively remote village amidst the northern Iran’s Alborz Mountains, a well-fortified castle was sheltering the followers of Hasan-e Sabbah (1070–1124), spiritual leader of Islam’s heretical Ismaili sect, known as ‘Assassins’.

In popular myth, Sabbah led a bizarre, much-feared mercenary organization whose members were dispatched to murder or kidnap leading political and religious figures of the day.

In early 1930s, British-Italian explorer and travel writer Freya Stark described her exploration of the place in her book “The Valleys of the Assassins”.

Nowadays, the ruined castle, which is also known as Alamut Castle, is a top travel destination in northeastern side of Gazor Khan Village in the environs of Mo’alem Kalayeh, from the environs of Roudbar of Alamut, Qazvin province.

While approaching the village, you should pass for nearly half along a narrow road surrounded by cherry and pomegranate orchards, until a mass of gray-brown rock looms from distance with fortifications perched atop a summit.

Alamut, which means “eagle’s nest”, is a geographic region in the western edge of the Alborz range, between the dry and barren plain of Qazvin in the south and the densely forested slopes of the Mazandaran province in the north.

Narratives say that the name Alamut derives from a regional eighth-century king who spied an eagle landing amid its rugged lofty crags and was inspired to build an impregnable fortress.

Sabbah’s rule from Alamut (which he renamed City of Good Fortune) is shrouded in mystery and enigma. This is partly because most Ismaili records of the era were destroyed by the Mongols while the writings of their detractors survived.

It is said that Assassins believed that their actions would transport them to paradise. Supposedly Sabbah cunningly cultivated such beliefs by getting his followers stoned on hashish (unbeknown to them) and then showing them beautiful secret gardens.

This gave the sect its popular name ‘Hashish-iyun’, root of the modern English term ‘assassin’. Or so the story goes. Peter Willey’s book, Eagle’s Nest, gives an altogether more sympathetic version, portraying Sabbah as a champion of the free-thinking, pro-science Islamic tradition and suggesting that the hashish tales were exaggerations designed to denigrate Ismaili Islam.

Whatever the truth, most of the impregnable Ismaili castles were captured by Mongol ruler Hulagu Khan in 1256 using diplomatic trickery, having earlier forced the surrender of the Ismailis’ spiritual leader (Sabbah’s successor).

The crushing of Alamut Castle was effectively the end of the Ismailis for generations, though believers resurfaced centuries later and now Ismaili Islam is the predominant faith in parts of Tajikistan and northern Pakistan (though not at all in Iran).

The castle was almost forgotten and only returned to public consciousness with the publication of Stark’s 1930s travel diary Valleys of the Assassins. A copy of that recently reprinted volume makes a great companion for the trip.

Most visitors -- virtually all Iranian -- regard the gorgeous mountain-rimmed valley as an idyllic weekend retreat. Villages and hamlets dot its floor and sides; corn fields and rice paddies occupy parcels of land between ravines, and irregular terraced plateaus ruffle the valley’s picturesque undulating terrain. 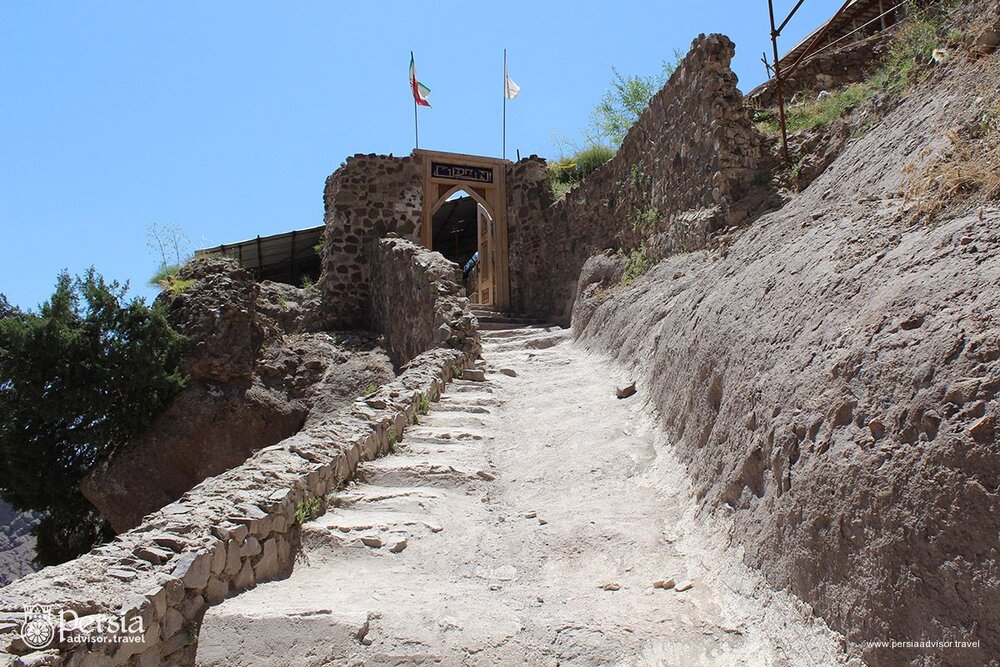 An aerial view of the ruined Alamut Castle, which stands perched on Alborz Mountains, northern Iran.

In Gazorkhan, snack and tea vendors do a brisk trade beneath the castle’s entrance kiosk. A steep trail winds up the hillside past an unfinished hoist to a narrow saddle overlooked by a weirdly eroded slanting crown of rock and cliffs.

Here is a select of comments that visitors to the historical fortress have posted to TripAdvisor, one of the most popular travel websites in the world:

The Alamut Castle offers some great views across the Alamut Valley, they are renovating parts of the castle, but already a very worthwhile place to visit. (Bastiaan v. from Utrecht, the Netherlands; Date of experience: September 2018)

“Worth taking time to step up the stairs to the summit”

Yes it worth going there but should not be the only visit in Alamut! I met many tourists who just came there to visit the castle only, but it is a big mistake! Before the castle I visited several places which worth more!

I had a tour guide friend who gave me good tips and also he drove me the places! His name is Farzad who has a page as Alamut eagle over here on trip advisor! (Fabian h. from Aachen, Germany; Date of experience: May 2019)

“Alamut fortress and its amazing view on the summit”

It took one hour and half from Qazvin to Alamut. The road itself is beautiful with mountain sceneries. It takes 20 minutes to step up the stairs and you are supposed to buy ticket. The view of Ghazor khan village and horizon from the summit is perfect.

You must know that it is not the only point in Alamut if you have the plan to go there. My guide took me to some amazing lesser known places in Alamut. Not bad to contact him if you are going to have a trip to Alamut. He is helpful to travelers and speaks fluent English. (robinbackpacker from Paris, France; Date of experience: May 2019)

It is definitely worth climbing up the 500 steps to this castle for the views. The walk was relatively easy though you can hire a donkey or a horse.

The castle itself is in ruins but the unfortunate feature is the scaffolding that has been put up to give access. There are also rusty tin roofs covering much of the structure making photography almost impossible. (Sus1952 from Palmerston North, New Zealand; Date of experience: May 2019)

Landscape is like no else (don’t miss tre 3 canyons!); castles are intriguing; food great; my guide Sohrab the best of my whole travel, kind, knowledgeable and relaxed. (SteveVax from Turin, Piemonte, Italy; Date of experience: April 2019)

I did a day trip to Alamut valley including Alamut castle with Vahid [a local guide] and had a blast! The nature in the valley, the canyons and the views from the castle are absolutely stunning!

Vahid showed me all the good places, stopped whenever I wanted to take some photos and we I was also served very delicious home cooked lunch at a family that runs a guesthouse and restaurant next to the castle.

Vahid also explained a lot about the history of the castle and the region as I didn’t have much time to do any research in advance. He’s a really funny and knowledgeable guide and he even helped me out to plan my onward journey the next day and helped me catch the right bus from the highway to Tabriz, I highly recommend him!! (enamena from Stuttgart, Germany; Date of experience: April 2019)