TEHRAN(Basirat): A photo has gone viral in Iran showing an old woman infected with the novel coronavirus sleeping on the lap of a young male nurse on the floor. 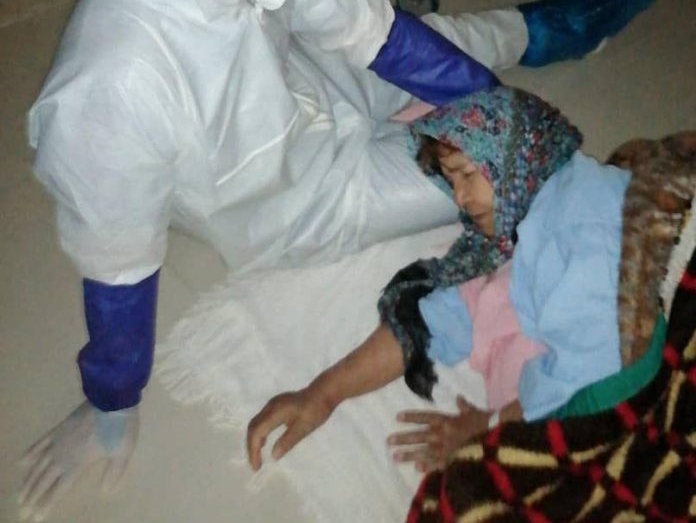 Doctors, nurses and hospital staff have been forced to stay away from their families and loved ones for a long time due to their services to the coronavirus patients in Iran. It’s difficult, but they have to risk their lives to heal the sick.

However, amid these difficulties, every now and then the videos of the self-sacrifice of health workers are published in social media which soften the bitterness of the virus news.

On Saturday, a picture of an old woman with corona, who was hospitalised in Imam Khomeini Hospital of Bonab in East Azarbaijan province, went viral.

Mamma Kobra is an elderly woman who suffers from the Alzheimer’s disease. She does not know those around her and thinks that nurses are her children and the hospital is her home. She insists on sleeping on the ground and the nurses of the ward put her head on their lap to help her relax.

Javad Naseh is a nursing assistant whose image has gone viral these days. He was born in 1986 in Maragheh and works at Imam Khomeini Hospital in Bonab.

He says when the coronavirus was first reported in Bonab, a front was formed to fight against the disease. Young nurses, including him were the main members of this front.

“It was decided that the front be formed both at the isolation ward and the emergency department. Thank God, I could be a part of this front line,” he added.

Mamma Kobra is an 86-year-old woman from Bonab, who is infected with corona, and unfortunately suffers from Alzheimer’s disease as well, he went on to say.

“She is a lovely old woman who is now in good health and hospitalised in the isolation ward. Of course, she gets bad tempered and rude sometimes. But she feels relaxed talking to me and even calls me by my first name.”

Regarding his viral photo with Mamma Kobra, he says “She is not used to sleeping on the bed and because of this she could not sleep for a long time. This caused her to be restless. Her doctor repeatedly instructed the nurses to inject drugs, but none of them worked. Once at midnight the nurses came to inject her a shot, but she got restless and her loud voice angered other patients. My colleagues asked me to come and see what she wanted.”
“She said she has to sleep on the floor. So, I immediately disinfected the floor and put a blanket on the floor for her to sleep on, but I didn’t want her to put her head on the small pillows. I told her she can rest her head on my lap to feel comfortable. At that time, I wasn’t thinking about myself or anything else. I was just trying to calm a patient down because we are health advocates. We don’t know if we may get sick today or tomorrow. The health and well-being of people is more important to nurses than anything else,” continued Mr Naseh.

In the end, this Iranian nurse called on all people to pay attention to health recommendations for their own sake and stay home as much as possible so that the country can get through this critical situation soon.

Refusing to treat elderly or disabled Corona patients is a result of the domination of capitalism
US Virus Deaths near 35,000; Joblessness 22 Million
Iran Condemns US Move to Halt Funding to WHO
IRGC Unveils Coronavirus Remote Detector
Error Report
0