Clinton: 'We'll fix it together,' not with Trump 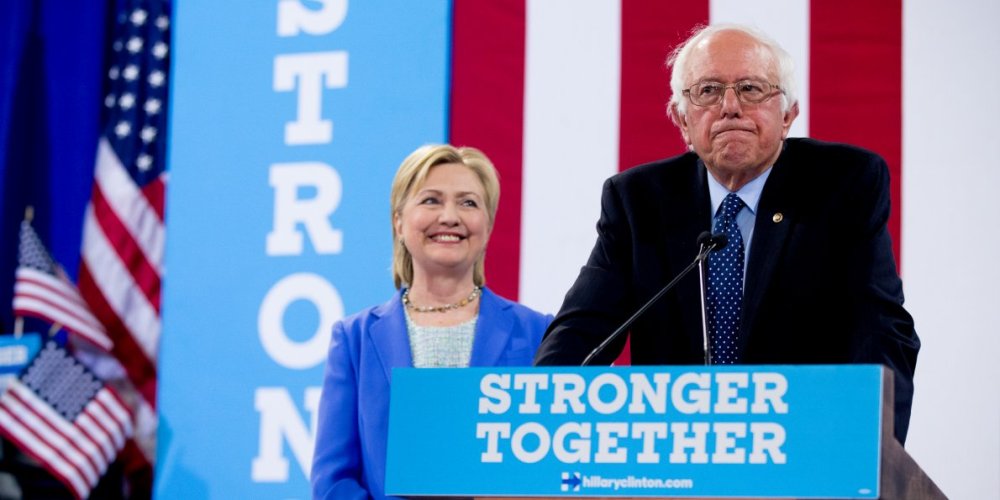 Her nomination was historic, putting her one step closer to being the first woman elected president. But much in her speech, like so many other things in 2016, was defined less by her own vision than by her Republican opponent's.

Clinton warned that Trump had taken the Republican message from "Morning in America" to "Midnight in America," adding, "he wants us to fear the future and fear each other."

Throughout her speech, she tried to link her message to the national unification begun by the Founding Fathers in the city where she spoke. And she repeated her "it takes a village" catchphrase to contrast her politics with Trump's promsies to fix things himself.

"We are clear-eyed about what our country is up against," Clinton declared, without saying what it was, "but we are not afraid. We will rise to the challenge, just as we always have."

Her nomination sets up a general election contest between a diverse Democratic coalition and Trump's angry and energetic but demographically narrow band of voters who believe the country is on the wrong track.

Clinton has responded to Trump's calls to build a wall along the U.S.-Mexican border by promising to build bridges. She has repeatedly called Trump's rhetoric divisive and said Americans are "stronger together." On Thursday, she discussed the cultural fragmentation Trump's voters are responding to, and blamed the Republican nominee for making it worse.

"Powerful forces are threatening to pull us apart," she said. "Bonds of trust and respect are fraying. And just as with our founders there are no guarantees. It's truly is up to us. We have to decide whether we're going to work together so we can all rise together."

Clinton also addressed widespread dissatisfaction with the economy that has driven Trump's campaign and that of Bernie Sanders even after nearly eight years of President Obama. Nevertheless, restive Sanders delegates continued to cry out even as Clinton spoke.

"My primary mission as president will be to create more opportunity and more good jobs with rising wages right here in the United States," she said. "From my first day in office to my last." Both Trump and Sanders have campaigned against companies shipping jobs overseas and the trade deals they argue facilitate deindustrialization.

Clinton then described where she'd create those "good jobs with rising wages": Rust Belt and other economically blighted areas where Trump vows to make his stand. She spoke of "too much inequality" and "too little mobility."

"It's wrong to take tax breaks with one hand and give out pink slips with the other," Clinton said, echoing Trump and Sanders. "And I believe Wall Street can never, ever be allowed to wreck Main Street again."

"Especially in places that for too long have been left out and left behind," she said. "From our inner cities to our small towns, Indian Country to Coal Country. From the industrial Midwest to the Mississippi Delta to the Rio Grande Valley."

But, Clinton added, "Don't believe anyone who says I alone can fix this… Really?"

While Clinton has more foreign policy experience, Trump appealed to many voters concerned about national security in an age of terrorism and public safety as police officers are shot in the streets and some cities experience rising crime for the first time in years. She tried to present herself as someone better equipped to handle these challenges than Trump.

"We will not ban a religion," she said. "We will work with all Americans and our allies to fight terrorism."

"The choice we face is just as stark when it comes to our national security," Clinton proclaimed. "Anyone reading the news can see the threats and turbulence we face. From Baghdad and Kabul, to Nice and Paris and Brussels, to San Bernardino and Orlando, we're dealing with determined enemies that must be defeated. No wonder people are anxious and looking for reassurance — looking for steady leadership."

Retired Gen. John Allen, the former commander of U.S. forces in Afghanistan, took the stage at the Democratic convention with 37 military veterans. He argued that Clinton, not Trump, was the candidate to defeat ISIS, strengthen NATO, protect the homeland and "take on the forces of hatred and chaos." Allen sounded every bit the career military man he was as he boomed from the podium that America's enemies "will fear us."

Yet even this showed some cracks in the Democratic coalition that Trump hopes to exploit in November. As Allen spoke, some Sanders delegates chanted "No more war!" as they did when former CIA director and Secretary of Defense Leon Panetta spoke the night before.

Speaker after speaker rose to argue that Trump was discriminatory and divisive, overrated as a businessman, vague as a policymaker and too far out of the mainstream to lead, even by what they considered to be the Republican Party's low standards.

Former Michigan Gov. Jennifer Granholm preceded Clinton on stage, one of many speakers to argue Trump was too self-absorbed and egotistical to care about working men and women. She crooned a version of Carly Simon's 1972 hit "You're So Vain," saying "You probably think this speech is about you." Sen. Sherrod Brown, D-Ohio, listed all the products bearing Trump's name that are manufactured abroad, despite his vow to "Make America Great Again."

Clinton made this point herself: "Donald Trump says he wants to make America great again – well, he could start by actually making things in America again."

She also raised the familiar objection to Trump's temperament, saying, "A man you can bait with a tweet is not a man we can trust with nuclear weapons."

It was an arduous path for Clinton. In 1992, Bill Clinton promised that people who voted for him would get "two for one," making her his running mate almost as much as Al Gore. Yet her biggest policy initiative as first lady, an ambitious bid to overhaul the American healthcare system, ended in failure.

Clinton recovered to twice win election to the U.S. Senate in her own right. But when she ran for the White House, she lost a tight race for the 2008 Democratic nomination to an African-American freshman senator. She bounced backed yet again to serve as secretary of state in President Obama's first term, seeing her approval ratings spike.

But her record at the State Department was blemished by a failed military intervention in Libya, the death of four Americans at the consulate in Benghazi and a private email server the FBI concluded demonstrated "extreme carelessness." In her second campaign for president, Clinton had to beat back an unexpectedly strong challenge from a socialist largely running against her husband's legacy of business-friendly centrism and triangulation politics.

Clinton thanked both her main 2008 and 2016 rivals in her acceptance speech. "America is stronger because of President Obama's leadership, and I'm better because of his friendship," she said.

"I want to thank Bernie Sanders," Clinton continued. "Bernie, your campaign inspired millions of Americans, particularly the young people who threw their hearts and souls into our primary." The line caused Sanders delegates to briefly but loudly chant, "Bernie! Bernie! Bernie!"

Now Hillary Clinton has once again proven her husband Bill isn't the only "Comeback Kid" in the family. "More than a few times, I've had to pick myself up and get back in the game," she said.

Her moment of victory gives her a real opportunity to ride that comeback all the way to the presidency. Trump is the biggest obstacle remaining in her way.