TEHRAN (Basirat)- A large cache of US-made ammunition has been discovered in a house in Aleppo’s Bani Zaid district, abandoned by the Jabhat Fateh al-Sham (also known as al-Nusra Front) fighters. 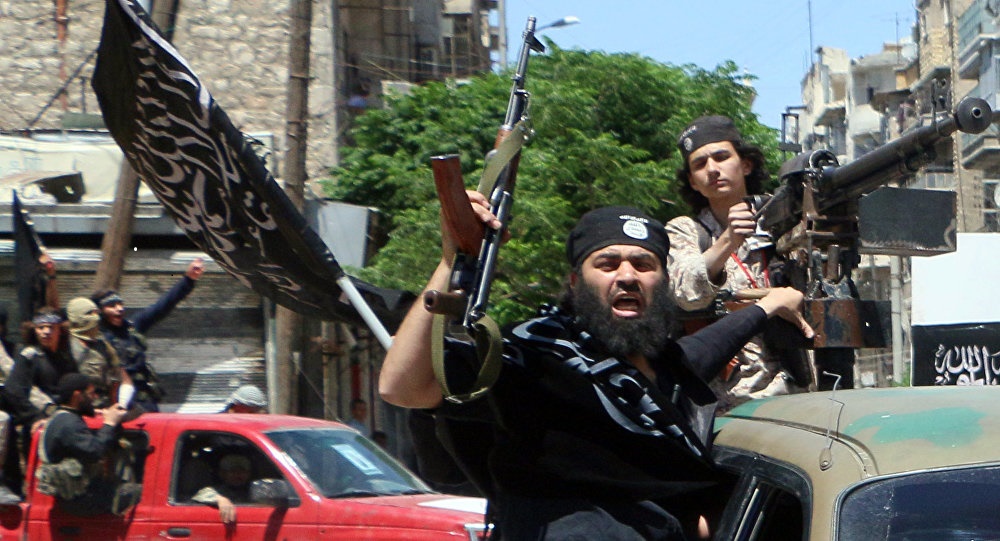 A large cache of US-made ammunition has been discovered in a house in Aleppo’s Bani Zaid district, abandoned by the Jabhat Fateh al-Sham (also known as al-Nusra Front) fighters.

A large cache of US-made ammunition has been discovered in a house in Aleppo’s Bani Zaid district, abandoned by the Jabhat Fateh al-Sham (also known as al-Nusra Front) fighters.

"The video appeared online on Thursday and purported to show the discovery of a large cache of western arms and ammunition in a house in Aleppo’s eastern Bani Zaid district. The majority of the weapons appear to be of US origin and include US-made anti-tank missiles system (TOW 2A), American UN0181 missiles, as well as US-made 81mm mortars and ammunition. Some of the boxes containing weapons are labeled with the letters ‘USA’,” RT reported Thursday.

Citing Scotland Yard detective Charles Shoebridge, the media outlet called attention to the fact that the video appears to be genuine.

It is no secret that American weapons destined for the US-backed "moderate” fighters have repeatedly ended up in the wrong hands.

On September 22, 2015 The Telegraph reported that fighters with the US-trained Division 30 surrendered to al-Qaeda affiliate al-Nusra Front and handed their weapons to the terrorists.

On April 13, 2016, Al Jazeera released footage that purportedly showed al-Nusra Front extremists demonstrating US-made weapons captured from the Syrian Revolutionary Front (Jabhat Thowar Suriyya) in the Syrian province of Idlib. The White House regarded the SRF as its bulwark against Daesh in Syria.

On June 26, The New York Times revealed that "weapons shipped into Jordan by the Central Intelligence Agency and Saudi Arabia intended for Syrian rebels have been systematically stolen by Jordanian intelligence operatives and sold to arms merchants on the black market,” citing American and Jordanian officials.

Adding embarrassment to frustration, the media outlet noted that some of the stolen weapons were used to kill two Americans at a police training facility in Amman, according to FBI officials.

On July 3, Al-Masdar News reported that al-Nusra Front raided the headquarters of the FSA on July 2 in the towns of Kafr Anbel, Hazazen and Ma’arat Harmeh.

"Al-Nusra [Front] seized all weapons and ammunition held by the FSA group, including a batch of US supplied TOW anti-tank missiles,” the media outlet reported.

Incredible as it may seem, the US State Department has as of yet failed to tackle the problem.

During a June 27 press briefing, State Department spokesperson Elizabeth Trudeau refused to provide any comments on the New York Times’ report regarding the systematical theft of the US-made weapons destined for "moderate Syrian opposition” in Jordan.

Likewise she refused to discuss earlier reports shedding light on US weapons repeatedly ending in the hands of al-Qaeda’s affiliate in Syria.

Trudeau also remained silent about the agencies involved in the investigation into the case.

Speaking to Trudeau, Matthew Lee of the Associated Press called attention to the fact that the White House had been also questioned on the matter.

"You know what they did?” Lee asked, "They referred the questions to the State Department and to the FBI.”

So what lies at the root of the US State Department’s unwillingness to discuss the problem? Why are the same mistakes being repeated by the Obama administration over and over again?

In their article for War on the Rocks, US academics Austin Carson and Michael Poznansky explained why the US covert program of training and arming the Syrian rebels is "worth the trouble” despite the fact that US-made weapons often find their way into the wrong hands.

"Anecdotal reports of rogue Jordanian intelligence officers hustling weapons on the black market are a far cry from systematic evidence about the CIA’s success in affecting Assad’s thinking, influencing the battlefield, and expressing American interests. Of course, this opacity is the raison d’être of covert action,” the scholars believe.