G20 Summit in China to Focus on Economy, Backstage on Political Talks

TEHRAN (Basirat)- On September 4-5, the leaders of the Group of Twenty major economies, which collectively account for 90 percent of the world’s gross domestic product and 80 percent of global trade, will convene in the eastern Chinese city of Hangzhou for their 11th annual summit. 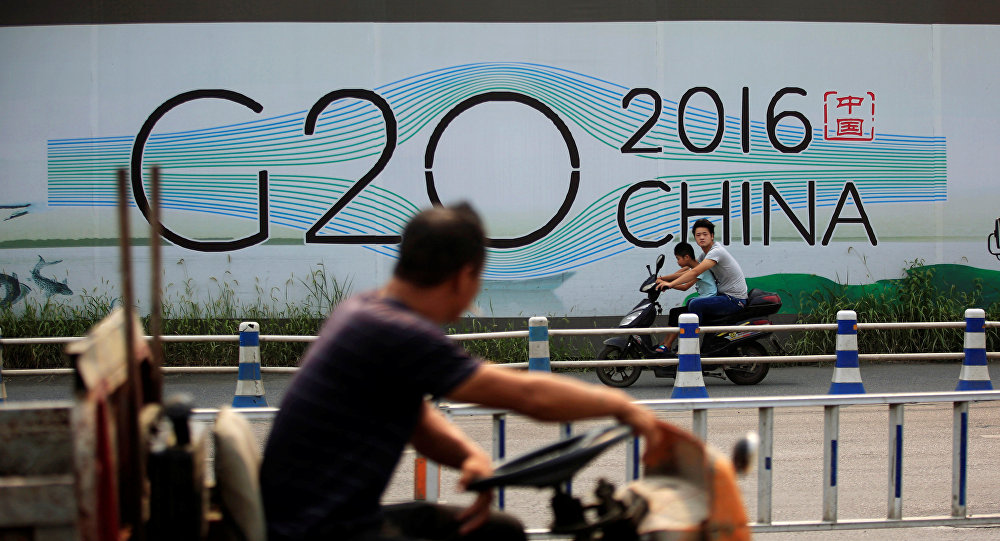 On September 4-5, the leaders of the Group of Twenty major economies, which collectively account for 90 percent of the world’s gross domestic product and 80 percent of global trade, will convene in the eastern Chinese city of Hangzhou for their 11th annual summit.

As a host country, China is determined to keep the focus of the G20 summit on economics and off politics, although many political issues may emerge at bilateral talks on the sidelines of the gathering.

While announcing Beijing's priorities for the G20 gathering in May, Chinese Foreign Minister Wang Yi said that China would strive to transform the forum "from a crisis-response system to a long-term-governance mechanism.” Later on, the host country asserted that in order to achieve this task the world economy should become more innovative, invigorated, interconnected and inclusive.

For many years, China has been attempting to reverse its longstanding dependence on exports and foreign direct investment that served as major drivers for its economic rise, emphasizing instead the need to encourage innovation and entrepreneurship. As the host of the G20 summit this year, China plans to underline this pivot toward stipulating domestic consumption through international cooperation, with an official G20 memo stating that the summit should "encourage across-the-board innovation in science and technology, development concepts, institutions and mechanisms, as well as in business models."

Another priority for China that will dominate the global agenda this fall is providing emerging-market countries with more say in international organizations such as the International Monetary Fund (IMF) and the World Bank. The G20 talks are likely to touch upon the next steps in implementing the IMF's 2010 reforms pledge to grant emerging economies more influence and access to capital through the fund. As Chinese Foreign Ministry spokesman Lu Kang mentioned on August 24, the number of developing countries invited to the Hangzhou Summit was larger than to any prior gathering.

Hangzhou will be a summit of substantial success, at least based on the many meaningful agreements that have already been reached across its broad economic agenda, John Kirton, the founder and co-director of the G20 Research Group at the Munk School of Global Affairs at the University of Toronto, told Sputnik.

"It has already shifted the G20 to focus on the medium terms by putting as its first priority innovation, including the fourth industrial revolution and digital economy. It could be a very strong success if it produces bold action here, by launching an innovative green revolution to control climate change before it is too late," the expert explained.

Among these achievements, one of the most important was made in July, when the G20 trade ministers at the meeting in Shanghai agreed that the forum would work toward cutting global trade costs by 15 percent and renewed their commitment to trying to cut protectionist measures with a promise to ratify the relevant WTO's trade facilitation agreement by the end of the year.

Finally, China as a host country suggested that the G20 should roll out a coordinated investment policy, with trade ministers agreeing in July on nine core principles for global investment including establishing open, non-discriminatory and transparent investment conditions and protecting investors with channels to resolve disputes.

According to Harry Broadman, director of the Council on Global Enterprise and Emerging Markets and a senior fellow at Johns Hopkins University's Foreign Policy Institute, the summit in Hangzhou, which will take place against the background of China’s structurally weakening economy and the uncertainty surrounding the practical outcomes of the Brexit negotiations, "will provide the China's leader Xi Jinping with a unique opportunity on the world economic stage to show he is a global player during a supremely complex time for policy-making."

"Thus the real question is: what levers are really at Xi’s disposal to demonstrate to his cohorts that he can deftly handle this confluence of huge economic challenges both at home and abroad?" Harry Broadman told Sputnik ahead of the summit.

Barry Carin, a senior fellow at the Centre for International Governance Innovation (CIGI), in contrast to other experts, was pessimistic about the possibility of any important economic breakthroughs coming from the G20 summit.

Two maxims: 'Too many cooks spoil the broth' and 'A journey of a 1000 miles begins with a single step'. It is unrealistic to expect 20 diverse countries who are not like-minded to resolve complex multi-dimensional problems in one year. I expect aspirational statements and declarations of intent," Carin, an expert on global economic networks, such as the G20, said.

He also doubted the likelihood of the forum being turned into a long-term-governance mechanism, as China desires.

"Crisis management can be effective because of the 'fellowship of the lifeboat'. Despite best efforts by the Chinese, there are too many obstacles that prevent forming a long term governance mechanism," he asserted.

Prior to the summit, Chinese Vice Foreign Minister Li Baodong stressed that Beijing was eager to keep the focus off political issues, such as South Korea’s plans to deploy a US THAAD advanced anti-missile system or the South China Sea disputes.

Beijing, whose claim to sovereignty over most of the South China Sea was rejected by the Permanent Court of Arbitration in the Hague in July, has long opposed discussing the South China Sea disputes at multilateral forums. In May, China responded angrily when the subject was raised during the G7 summit in Japan.

However, this issue will be hard to avoid if Japanese Prime Minister Shinzo Abe, who previously insisted that Asian and European leaders address the issues surrounding North Korea and the South China Sea among others, will have a bilateral meeting with Chinese President Xi Jinping on the sidelines of the G20 leaders’ summit. Last week, Shotaro Yachi, Abe’s national security adviser, met Chinese State Councilor Yang Jiechi in Beijing to discuss preparations for the first face-to-face meting between the two leaders since April 2015.

A bilateral meeting between Xi and South Korean President Park Geun-hye has not been ruled out either. As the South Korean Foreign Ministry spokesperson told Sputnik on Monday, "such a meeting is an option."

Another bilateral meeting — between the host, President Xi, and Russian President Vladimir Putin — is expected to be much more pleasant for both sides. In mid-August, a senior Chinese diplomat, cited by South China Morning Post, told the media outlet that Putin would be guest No. 1 at the annual gathering of leaders with the Sino-Russian friendship, dubbed a "bromance" in the West, proving an exhibit of good diplomacy.

It will be in evident contrast to the reception the Russian leader received at the 2014 G20 summit in Australia's Brisbane, which he left abruptly before the final communique was issued, following critical remarks by Western leaders over the Ukraine crisis, citing the need to get some sleep.

China is Russia’s second largest trading partner, after the European Union, while Russia is one of the leading oil suppliers to China. The two countries are also united through membership of regional organizations like the Shanghai Cooperation Organization and BRICS, with Moscow also being supportive of the New Development Bank and the Asian Infrastructure Investment Bank, headquartered in China and widely seen in the West as a challenge to the US-led IMF and the World Bank.

At the end of June, the Turkish president Recep Tayyip Erdogan also said that he would meet Putin on the sidelines of the summit. Also in June, Russian Deputy Foreign Minister Sergei Ryabkov announced that Putin might meet US President Barack Obama on the sidelines of the G20 summit, although later the president's spokesman, Dmitry Peskov, said no decision about such a bilateral meeting had been taken as yet.

According to Harry Broadman, Obama's appearance will be one of the political threads to watch. "Since this will be US President Barrack Obama’s last G20 Summit, he may use the occasion to push issues he cares deeply about: climate change and cyber warfare," the expert predicted.

The environmental topic may be given further impetus by Canadian Prime Minister Justin Trudeau, who arrived in China on August 30 for his first official visit to the country. "As Canada's Justin Trudeau is coming to the G20 with climate change as a high priority he and Xi could join to give the summit real impetus to succeed here," John Kirton suggested.

The conflicts in Syria and Ukraine are also expected to be discussed during the backstage talks. On Wednesday, French government spokesman Stephane Le Foll said, that President Francois Hollande plans to discuss settlement of the Syrian conflict with Vladimir Putin and Turkish President Recep Tayyip Erdogan in Hangzhou. According to media speculation, Hollande and Putin may also meet with German Chancellor Angela Merkel to discuss the prospects for reconciliation in Ukraine. However, on Wednesday, a spokesperson for the German chancellery could not confirm to Sputnik that such a trilateral meeting would take place.

Finally, the summit will see an informal meeting of the leaders of Brazil, Russia, India, China and South Africa, the so-called BRICS group of emerging economies, which may be put in the spotlight by the recent impeachment of Dilma Rousseff, Brazil's former president, succeeded by her ally-turned-opponent Michel Temer. Heading to China, the newly-appointed Brazilian leader assured that his participation in G20 would "reveal to the world that we have political and legal stability."

Almost all G20 summits have been notoriously and mostly remembered for violent anti-globalist protests outside the summit venues. The Hangzhou summit will not follow suit in this regard.

Authorities in Hangzhou have declared a week-long holiday, starting on September 1, offering residents free admission to tourist attractions in nearby cities, prompting them to leave the city for the dates of the summit. They also imposed 10-day restrictions on trucks and tractors entering the city and surrounding areas and forced half of the city’s cars off the road from 2 a.m. to midnight each day, depending on their number plate.

Similar limits were introduced during the 2008 Summer Olympics and the 2014 Asia-Pacific Economic Cooperation summit in Beijing, which helped not only to temporarily decrease the host city's population but also to get rid of notorious smog caused by heavy air pollution.

In April, China asked the countries taking part in the G20 summit to provide lists of possible terror groups and terrorists who might target the meeting. Closer to the world leaders' gathering, the authorities beefed up security measures at Shanghai’s two main airports and railway stations, implementing two-level security checks for passengers departing for Hangzhou.

Media reports ahead of the summit speculated that the city spent some 160 billion yuan ($24 billion) on the G20 summit, thus exceeding the Brazilian city of Rio’s $5 billion expenditure on the Olympic Games. Hangzhou officials have denied the claims, stating that city's annual municipal budget was much less than the figures quoted and emphasized that all G20 conference centers and infrastructure investments had been previously planned and not exclusively constructed for the summit needs.