The Unspoken War on Yemen, Anglo-American Crimes against Humanity, U.N. and Media Silence, Complicity of “The International Community”, Destruction of an Entire Country…

TEHRAN (Basirat)- Yemen’s Legal Centre for Rights and Development (LCRD) recorded the bombings by the Saudi led “coalition”, armed by the US and UK and advised by their military specialists, thus collusion and co-operation of both countries render them equally culpable for the carnage. 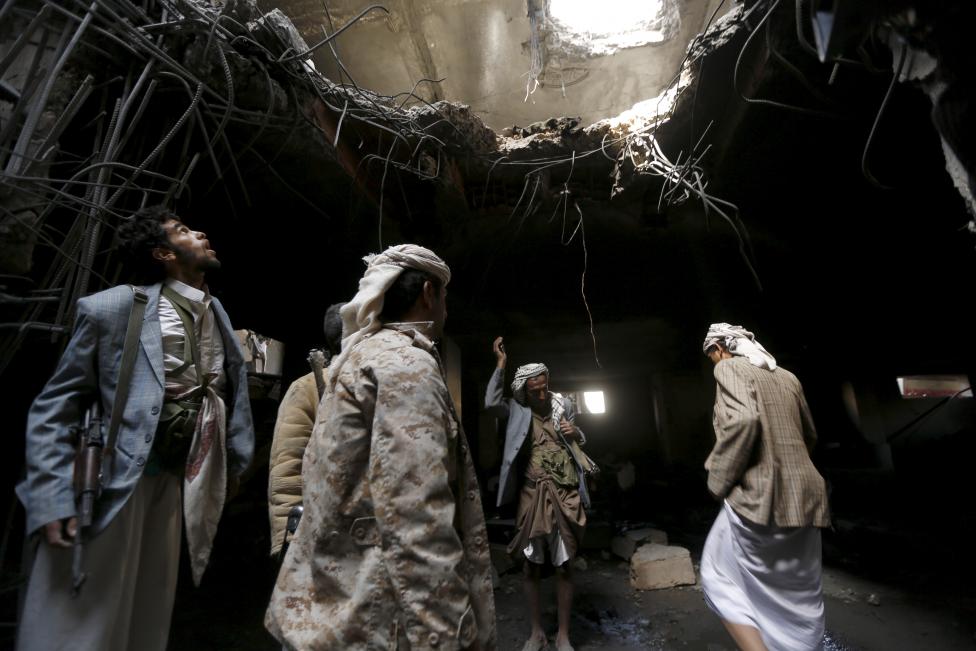 Yemen’s Legal Centre for Rights and Development (LCRD) recorded the bombings by the Saudi led "coalition”, armed by the US and UK and advised by their military specialists, thus collusion and co-operation of both countries render them equally culpable for the carnage.

Yemen has a population of just 24.41 million (2013 figure) and according to the Rural Poverty Portal:

" … is one of the driest, poorest and least developed countries in the world. It ranks 140 out of 182 countries on the United Nations Development Programme’s Human Development Index (2009). An estimated 42 percent of the people are poor, and one Yemeni in five is malnourished. Poverty is endemic, particularly in more remote and less accessible areas.”

In the one day and night period covered here, attacked were the capital Sana’a and Sa’dah, Marib, AlJawf, Hajjah, Hodeidah.

Al-Jawf province: Eight strikes with a woman injured, the targeting of a house resulted in the destruction and damage to fifteen nearby houses in Al Ghayl District. This heartbreak, fear and destruction has been rained down in commensurate devastation near every twenty four hours since March 2015, Saudi Arabia is the lead culprit, but in the "coalition” are also Egypt, Morocco, Jordan, Sudan, the United Arab Emirates, Bahrain, Qatar and Kuwait.

Ironic to remember Kuwait’s "victim” status in 1990, when Iraq was threatened with being "reduced to a pre-industrial age” for taking revenge for Kuwait’s slant drilling theft oil from Iraq’s Rumaila oil fields. Now Kuwait, population just 3.369 million (2013) is now in the gang of murderous bullies decimating a poverty stricken country – no doubt as a thank you to Saudi Arabia for extending hospitality to their ruling family when they fled ahead of the Iraq troops, leaving their subjects to face the onslaught which their theft had generated.

Those who unleashed near Armageddon on Iraq over an oil dispute are either silent on or participating in Yemen’s nightmare – and as ever money is talking and the US and Britain are selling the arms and the ‘planes in billions of $s. Further ironically is that in September 2015, Faisal bin Hassan Trad, Saudi Arabia’s Ambassador to the UN in Geneva, was elected Chair of a United Nations Human Rights Council (UNHRC) panel. At the time UN Watch executive director Hillel Neuer said: "It is scandalous that the UN chose a country that has beheaded more people this year than ISIS to be head of a key human rights panel. Petro-dollars and politics have trumped human rights.”

In June this year Amnesty International called for Saudi to be stripped of its place on the UNHRC with Richard Bennett, heading Amnesty’s UN Office saying:

"The credibility of the UN Human Rights Council is at stake. Since joining the Council, Saudi Arabia’s dire human rights record at home has continued to deteriorate and the coalition it leads has unlawfully killed and injured thousands of civilians in the conflict in Yemen. To allow it to remain an active member of the Council, where it has used this position to shield itself from accountability for possible war crimes, smacks of deep hypocrisy. It would bring the world’s top human rights body into disrepute.”

"The strong evidence of the commission of war crimes by the Saudi Arabian-led coalition in Yemen should have been investigated by the Human Rights Council. Instead, Saudi Arabia cynically used its membership of the Council to derail a resolution to establish an international investigation … As a member of the Human Rights Council Saudi Arabia is required to uphold the highest standards of human rights. In reality, it has led a military coalition (carrying out) unlawful and deadly airstrikes on markets, hospitals and schools in Yemen. The coalition has also repeatedly used internationally banned weapons in civilian areas…” (Emphasis added.)

The double standards of the "international community” and its UN "umbrella” is ever breathtaking.

Equally breathtaking is that in July, the UK refused to rule out electing Saudi to its place in the UNHRC for a second time, in spite of Zeid Ra’ad Al Hussein, the UN’s High Commissioner for Human Rights, having stated that "carnage” caused by some Saudi coalition airstrikes appear to be war crimes.

But then, according to The Independent official figures in January this year showed sales of British bombs and missiles to Saudi: " increased 100 times in the three-month period since the start of the attacks on Yemen. The sales jumped from £9 million in the previous three months to £1 billion.”

Arms sales above flesh and blood, terror, heartbreak and humanity, every time.