TEHRAN(Basirat): The Holy Jamkaran Mosque has always been a place for praying and seeking the help of the Imam of the Age (may Allah, the Exalted, hasten his blessed reappearance). However, during the reign of the rebels (the Pahlavi era), they tried to make people forget about this Mosque. 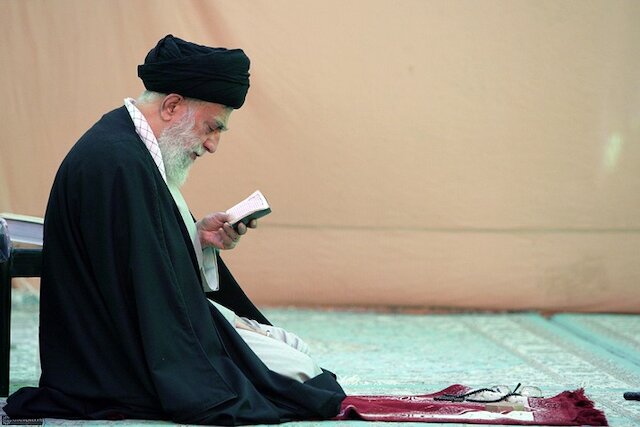 The Holy Jamkaran Mosque has always been a place for praying and seeking the help of the Imam of the Age (may Allah, the Exalted, hasten his blessed reappearance). However, during the reign of the rebels (the Pahlavi era), they tried to make people forget about this Mosque. Nonetheless, thanks to the victory of the Islamic Revolution, this Mosque has recovered its true position and has turned into a place for holding spiritual ceremonies, religious seclusion and seeking the Imam’s (‘a.j.) assistance. The recommendations of the religious scholars about visiting the Holy Jamkaran Mosque have such a background. Imam Khamenei is very committed to visiting this holy place to pray and perform his daily prayers. About this Mosque, he has said, “When we know with certainty, or find it very probable, that a certain place receives the attention of the ‘Friends of God,’ surely that place is more spiritual. The auspicious Jamkaran Mosque is one of these places and centers where the environment is prepared for people to pay attention to Allah, the Exalted, and to engage in saying recitations, showing humbleness to God, and beseeching Him.” On the occasion of the month of Sha’ban and the anniversary of the birth of the Imam of the Age (may our souls be sacrificed for his sake), Khamenei.ir has conducted a short interview with Hujjatul-Islam Muhammad Hassan Rahimian, the trustee of the Holy Jamkaran Mosque. In this interview, he speaks about His Eminence’s visits to the Holy Jamkaran Mosque.

Hujjatul-Islam Muhammad Hassan Rahimian: One of the friends in his office said that whenever Hazrat Aqa (Khamenei) feels weary or tired, he does one of the following three things. This is what he said, and our own observations confirm his account. One is that he visits the Holy Shrine of Imam Rida (peace be upon him). But since the situation is not very conducive to this, he does not go there more than two times a year. Another is that he visits the Holy Jamkaran Mosque, and the last is that he meets with the families of the martyrs.

Meeting with the families of the martyrs is something special and extraordinary for him. I would like to cite an example in this regard. In his trip to Bojnourd, when he went to visit northern Khorasan in the year 1391 (2012), after his continuous daily work, we visited the houses of a number of martyrs with him. These visits lasted until the middle of the night. On the way back, we accompanied him to the Governor’s residence, and Aqa wanted to go to where he was staying. We were saying goodbye and leaving. At the last moment, Aqa said in a special way, “Did you enjoy tonight?” It was clear that he himself had truly enjoyed his time in the company of those families of martyrs since he said this sentence when we were saying goodbye, which indicated the height of his exhilaration, joy and enthusiasm for these kinds of visits. As for His Eminence’s visits to the Holy Jamkaran Mosque, during my term when I was there, he would sometimes visit there in very short intervals – in the space of two or three weeks – and sometimes, after a longer interval. He would usually come at a time when it was quiet and not crowded. In the summer, because the days were longer, his visits ended with performing the evening prayers. And in the winter, because the days were shorter, he would come from the beginning of the sunset prayer. Naturally, when he arrived at the beginning of sunset, he would first perform the sunset and evening prayers. After that, he would perform the “Prayer of Greeting” and the prayer of the Imam of the Age (may Allah, the Exalted, hasten his blessed reappearance). If he arrived sooner, he would perform these prayers first, and then he would finish by performing the sunset and evening prayers.

He would usually bow, prostrate, and supplicate God in the Qonut for a long time.  Especially, after he finishes performing his prayers, he performs long prostrations. I have sometimes witnessed that he dries his face with several tissues. His long prostrations and Qonuts are accompanied with tears and weeping.

A point which is important from an educational point of view is that unlike many people who take their children with them when they want to travel for fun, Aqa brings several of his grandchildren and several members of his family each time he visits the Mosque. I always recount this as a lesson for others saying that we should familiarize our children with Mosques and worship acts from a very young age. In my opinion, this is very important educationally speaking. Hazrat Aqa (Khamenei) always uses the opportunity of performing the daily prayers and worship acts to familiarize children with this environment.

I remember a very long time ago, some of his grandchildren - who were small children at the time and truly didn’t understand about performing the prayers of the Imam of the Age (may Allah, the Exalted, hasten his blessed reappearance) - tried to copy the way Aqa was performing the prayers. They were doing the same moves in a very interesting manner. In my opinion, this is the result of his educational methods in relation to his family members. Interviewer: Considering that you were in the company of Imam Khomeini (may God show mercy on him) for a long time, what was his opinion about visiting the Holy Jamkaran Mosque? Did he ever visit the Mosque?

Hujjatul-Islam Muhammad Hassan Rahimian: You see, some people are targeting the issue of the Imam of the Age and the main Shi’a beliefs. Similarly, they are attacking the Holy Jamkaran Mosque. That is why they sometimes claim that Hazrat Imam (Khomeini) did not believe in the Holy Jamkaran Mosque. However, this is a grave accusation and a completely false allegation. I wish to briefly cite some examples of his contact with the Mosque.

Mr. Sheikh Hassan Sane’i recounted that he and Imam visited the Holy Jamkaran Mosque several times together. Imam performed the daily prayers there and sought the Imam’s (‘a.j.) assistance. Mr. Reza Farahani – who is alive at the present time, used to be Hajj Ahmad Aqa’s driver and was in contact with Imam (Khomeini) during his blessed lifetime – says that he himself used to drive Imam (Khomeini) to the Jamkaran Mosque. This took place after the victory of the Revolution and during Hazrat Imam’s (Khomeini’s) short stay in Qom.

Mr. Sayyid Muhammad Sajjadi Isfahani – one of our friends and one of Imam’s (Khomeini’s) students in Najaf who was also one of the companions of the late Hajj Aqa Mustafa – quotes Mr. Kashmiri directly as saying, “Once, I went to Jamaran with Hazrat Imam (Khomeini). When I wanted to say goodbye to him and leave, Imam took my hand and said, ‘Mr. Kashmiri, go to the Jamkaran Mosque and pray for me.’” Mr. Kashmiri used to pray in his home as well and perhaps he was a man whose prayers were usually answered. However, the fact that Imam (Khomeini) asked him to go to Jamkaran and pray for him is indicative of an astonishing and unusual reality. In my meetings with Ayatollah Shabiri Zanjani, he said on numerous occasions and emphatically that the Holy Jamkaran Mosque is an extraordinary and blessed place.