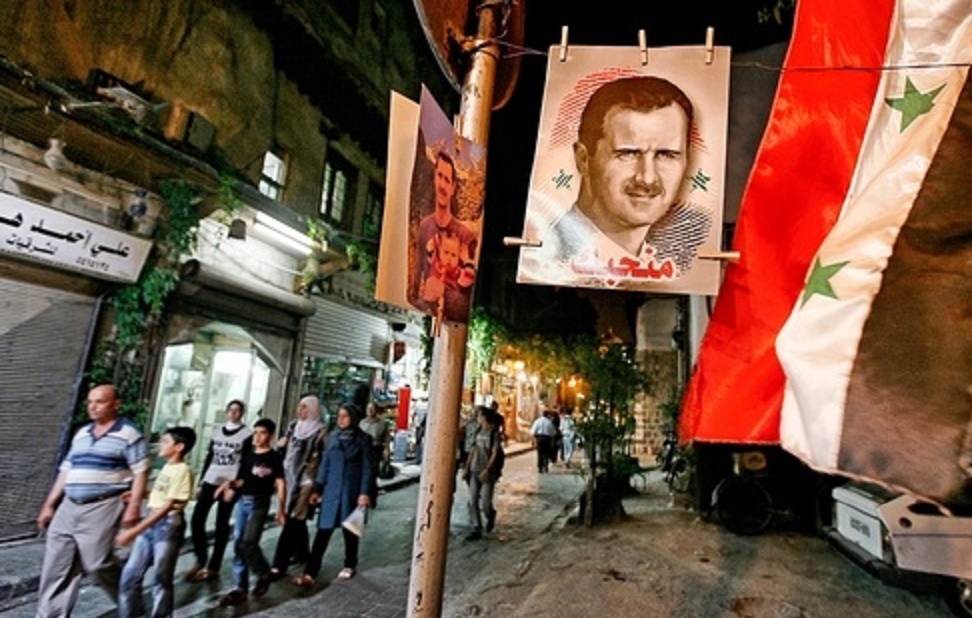 WikiLeaks cables show that the USA secretly signed President Assad’s death warrant in 2009 after he rejected the Qatar pipeline.

According to reports by the U.S., Saudi and Israeli intelligence agencies, the moment Assad rejected the Qatari pipeline, authorities from all three countries decided to hatch a plan to overthrow the uncooperative Bashar Assad.

In 2009, according to WikiLeaks, soon after Bashar Assad rejected the Qatar pipeline, the CIA began funding opposition groups in Syria. — Robert F. Kennedy Jr., Why the Arabs don’t want us in Syria, Politico

The main driver of the conflict is the country that’s toppled more than 50 sovereign governments since the end of World War 2.  We’re talking about the United States of course.

Washington is the hands-down regime change champion, no one else even comes close. That being the case, one might assume that the American people would notice the pattern of intervention, see through the propaganda and assign blame accordingly. But that never  seems to happen and it probably won’t happen here either. No matter how compelling the evidence may be, the brainwashed American people always believe their government is doing the right thing.

But the United States is not doing the right thing in Syria. Arming, training and funding Islamic extremists — that have killed half a million people, displaced 7 million more and turned the country into an uninhabitable wastelands –is not the right thing. It is the wrong thing, the immoral thing. And the US is involved in this conflict for all the wrong reasons, the foremost of which is gas. The US wants to install a puppet regime in Damascus so it can secure pipeline corridors in the East, oversee the transport of vital energy reserves from Qatar to the EU, and make sure that those reserves continue to be denominated in US Dollars that are recycled into US Treasuries and US financial assets. This is the basic recipe for maintaining US dominance in the Middle East and for extending America’s imperial grip on global power into the future.

The war in Syria did not begin when the government of Bashar al Assad cracked down on protestors in the spring of 2011. That version of events is obfuscating hogwash.  The war began in 2009, when Assad rejected a Qatari plan to transport gas from Qatar to the EU via Syria. As Robert F Kennedy Jr. explains in his excellent article "Syria: Another pipeline War”:

"The $10 billion, 1,500km pipeline through Saudi Arabia, Jordan, Syria and Turkey….would have linked Qatar directly to European energy markets via distribution terminals in Turkey… The Qatar/Turkey pipeline would have given the Sunni Kingdoms of the Persian Gulf decisive domination of world natural gas markets and strengthen Qatar, America’s closest ally in the Arab world. ….

In 2009, Assad announced that he would refuse to sign the agreement to allow the pipeline to run through Syria "to protect the interests of our Russian ally….

Assad further enraged the Gulf’s Sunni monarchs by endorsing a Russian approved "Islamic pipeline” running from Iran’s side of the gas field through Syria and to the ports of Lebanon. The Islamic pipeline would make Shia Iran instead of Sunni Qatar, the principal supplier to the European energy market and dramatically increase Tehran’s influence in the Mid-East and the world…”

Naturally, the Saudis, Qataris, Turks and Americans were furious at Assad, but what could they do? How could they prevent him from choosing his own business partners and using his own sovereign territory to transport gas to market?

What they could do is what any good Mafia Don would do; break a few legs and steal whatever he wanted. In this particular situation, Washington and its scheming allies decided to launch a clandestine proxy-war against Damascus, kill or depose Assad, and make damn sure the western oil giants nabbed the future pipeline contracts and controlled the flow of energy to Europe. That was the plan at least. Here’s more from Kennedy:

"Secret cables and reports by the U.S., Saudi and Israeli intelligence agencies indicate that the moment Assad rejected the Qatari pipeline, military and intelligence planners quickly arrived at the consensus that fomenting a Sunni uprising in Syria to overthrow the uncooperative Bashar Assad was a feasible path to achieving the shared objective of completing the Qatar/Turkey gas link. In 2009, according to WikiLeaks, soon after Bashar Assad rejected the Qatar pipeline, the CIA began funding opposition groups in Syria.

Repeat: "the moment Assad rejected the Qatari pipeline”, he signed his own death warrant. That single act was the catalyst for the US aggression that transformed a bustling, five thousand-year old civilization into a desolate Falluja-like moonscape overflowing with homicidal fanatics that were recruited, groomed and deployed by the various allied intelligence agencies.

But what’s particularly interesting about this story is that the US attempted a nearly-identical plan 60 years earlier during the Eisenhower administration. Here’s another clip from the Kennedy piece:

"During the 1950′s, President Eisenhower and the Dulles brothers … mounted a clandestine war against Arab Nationalism — which CIA Director Allan Dulles equated with communism — particularly when Arab self-rule threatened oil concessions. They pumped secret American military aid to tyrants in Saudi Arabia, Jordan, Iraq and Lebanon favoring puppets with conservative Jihadist ideologies which they regarded as a reliable antidote to Soviet Marxism….

The CIA began its active meddling in Syria in 1949 — barely a year after the agency’s creation…. Syria’s democratically elected president, Shukri-al-Kuwaiti, hesitated to approve the Trans Arabian Pipeline, an American project intended to connect the oil fields of Saudi Arabia to the ports of Lebanon via Syria. (so)… the CIA engineered a coup, replacing al-Kuwaiti with the CIA’s handpicked dictator, a convicted swindler named Husni al-Za’im. Al-Za’im barely had time to dissolve parliament and approve the American pipeline before his countrymen deposed him, 14 weeks into his regime…..

But all that CIA money failed to corrupt the Syrian military officers. The soldiers reported the CIA’s bribery attempts to the Ba’athist regime. In response, the Syrian army invaded the American Embassy taking Stone prisoner. Following harsh interrogation, Stone made a televised confession to his roles in the Iranian coup and the CIA’s aborted attempt to overthrow Syria’s legitimate government….(Then) Syria purged all politicians sympathetic to the U.S. and executed them for treason.” (Politico)

See how history is repeating itself? It’s like the CIA was too lazy to even write a new script, they just dusted off the old one and hired new actors.

Fortunately, Assad –with the help of Iran, Hezbollah and the Russian Airforce– has fended off the effort to oust him and install a US-stooge. This should not be taken as a ringing endorsement of Assad as a leader, but of the principal that global security depends on basic protections of national sovereignty, and that the cornerstone of international law has to be a rejection of unprovoked aggression whether the hostilities are executed by one’s own military or by armed proxies that are used to achieve the same strategic objectives while invoking  plausible deniability. The fact is, there is no difference between Bush’s invasion of Iraq and Obama’s invasion of Syria. The moral, ethical and legal issues are the same, the only difference is that Obama has been more successful in confusing the American people about what is really going on.

And what’s going on is regime change: "Assad must go”. That’s been the administration’s mantra from the get go. Obama and Co are trying to overthrow a democratically-elected secular regime that refuses to bow to Washington’s demands to provide access to pipeline corridors that will further strengthen US dominance in the region.  That’s what’s really going on behind the ISIS distraction and the "Assad is a brutal dictator” distraction and the "war-weary civilians in Aleppo” distraction. Washington doesn’t care about any of those things. What Washington cares about is oil, power and money. How can anyone be confused about that by now?  Kennedy summed it up like this:

"We must recognize the Syrian conflict is a war over control of resources indistinguishable from the myriad clandestine and undeclared oil wars we have been fighting in the Mid-East for 65 years. And only when we see this conflict as a proxy war over a pipeline do events become comprehensible.”

That says it all, don’t you think?