Future of Peace in Afghanistan after Landmark Deal with Hekmatyar

TEHRAN (Basirat)- To put it more clearly, Hekmatyar’s party is not essentially a serious security threat to Ashraf Ghani and his government in current situation. Therefore, one cannot hope that security measures will be improved in the country if the peace accord is finalized. 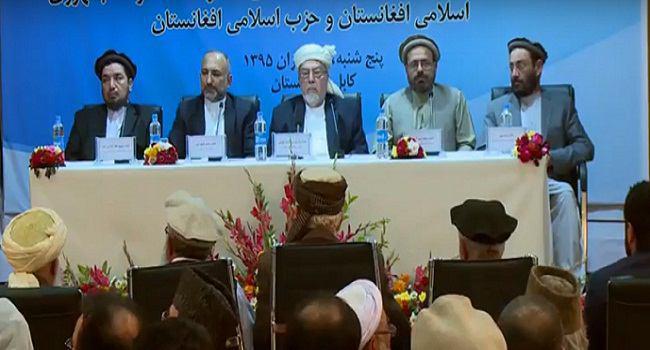 To put it more clearly, Hekmatyar’s party is not essentially a serious security threat to Ashraf Ghani and his government in current situation. Therefore, one cannot hope that security measures will be improved in the country if the peace accord is finalized.
By Mohammad Taghi Jahanbakhsh*

Afghanistan’s national unity government has started its third year in office. Bringing total peace to the country has been always top on the agenda of the Afghan government’s policy both during its election campaign and after that. To that end, it adopted a series of polices including strengthening ties with Saudi Arabia and Pakistan With which the country’s elites, the public in particular, agreed, despite their opposition to the policies, in the hope of restoring peace and security to the crisis-hit country.

In addition, four-way peace talks aimed at reviving dialog between Kabul and Taliban were held with the participation of senior officials from Pakistan, Afghanistan, China, and the United States. The negotiations were not successful and went into suspension with the death of Taliban leader Mulla Omar. Under such a circumstances, signing a draft peace deal with Gulbuddin Hekmatyar, the leader of the Hizb-i-Islami, whose name means Islamic Party, was a symbolic victory for the government of Ashraf Ghani, who has so far failed to bring peace to the country despite election promises to that effect.

It is the first achievement and one of the few positive results of the two-year life of the national unity government, which can pave the way for peace in the crisis-hit country. It can make the public, the civil society, Ghani’s political opposition hopeful about future and developments.

Moreover, the timing of the agreement was also important as it was clinched before Brussels Conference on Afghanistan held at the EU headquarters on October 4-5, 2016. In fact, the peace accord proved this to western sponsors of Ashraf Ghani that he is interested in peace, and that the deal will, therefore, prepare the ground for further financial assistance to the Afghan government, given Taliban’s ongoing attacks on Kunduz in coordination with local authorities.

The Hizb-i-Islami was once one of the most important and well-organized organizations among other Afghan groups in a way that a great portion of financial contributions were made to this party. After the Mujahedeen government came to power in Afghanistan, Hekmatyar was offered the prime minister's position, due to his position and his party’s influence on people, although he refused it. Then, he launched a campaign against the Islamic government.

However, many officials and influential figures of the Hizb-i-Islami quit it and made a comeback to political life in new Afghanistan. The party’s financial and logistical resources are now limited and, naturally, its influence and activity are diminishing. To put it more clearly, Hekmatyar’s party is not essentially a serious security threat to Ashraf Ghani and his government in current situation. Therefore, one cannot hope that security measures will be improved in the country if the peace accord is finalized. Because the Hizb-i-Islami has had no significant role in Afghanistan’s insecurity and the implementation of the peace deal will not bring about any palpable sense of change.

Another point that is worth noting is Hekmatyar’s complex and unpredictable character. Implementation and maintenance of this agreement are shrouded in mystery due to his intricate ties with Pakistan and Saudi Arabia, weak analysis of Afghanistan’s political atmosphere, and unstable character. Albeit, the Hizb-i-Islami’s diminishing influence, lack of serious political support for it, Hekmatyar’s old age and distance from the idealistic goals, and the frustration of his ambition to come to power are among main reasons which can maintain the deal. These factors have also made analysts hopeful about the accord’s preservation; however, they do not outdo Hekmatyar’s experience in taking action in Afghanistan’s political atmosphere. It seems that Hekmatyar has no willing to deep six the deal if the conditions are right.

According to the unofficial text of the draft peace deal published recently, the agreement is compiled in three chapters and 25 articles. 13 paragraphs of the accord address the Afghan government’s commitments and only 4 articles mention the Hizb-i-Islami’s obligations. It seems the government is not making pledges to the party, and the level of commitments made by the government is actually a message to opposition groups, Taliban in particular, to convince them to come to the negotiating table. Although Taliban have reprimanded Hekmatyar over the deal, but reports suggest that the militant group has strong desire to revive the talks with the government. Also, Taliban’s recent advances in Afghanistan’s Helmand can be deemed as a leverage for having the upper hand in the upcoming talks.

Peace and security in Afghanistan can be result of numerous reasons. Taliban militant group is apparently one of the best-known causes. The four-way talks with Taliban failed to yield results. Pakistan’s exclusive role in the talks and lack of trust in Islamabad’s good faith in bringing peace to Afghanistan are among known harms with respect to such efforts. Therefore, it seems that participation of influential players such as Russia, India, and the Islamic Republic of Iran in the talks can exert required pressure on Islamabad and Taliban for reaching a deal. Every one of the players can make use of their capacities and facilities to help with a peace process.

One of the strongest roots of insecurity and extremism in Afghanistan is existence of extremist ideologies in a large part of the population and even among the elites. Taliban, the Hizb-i-Islami, foreign powers and likewise elements are result of Afghanistan’s ideological and historic structure. In order to fight insecurity, first its roots need to be recognized and then destroyed. At the same time, reliable and acceptable ideological and intellectual systems should be offered.

Therefore, benefiting from cultural commonalities and developing a moderate interpretation of Islam with the help of Afghanistan’s Sunni and al-Jama'a scholars can be placed on the government’s top agenda. It seems that Iran can play a more active role in this regard.


Mohammad Taghi Jahanbakhsh is a graduate of Iranian Foreign Ministry’s School of International Relations. His main fields of interest are Afghanistan, the Eurasia Region, Public diplomacy, and soft power. He has published various articles and commentaries in scientific publications. The Iranian political analyst has also submitted numerous of his works to domestic and international conferences. He has authored many books as well from among which we can refer to "Russia and New Afghanistan”.