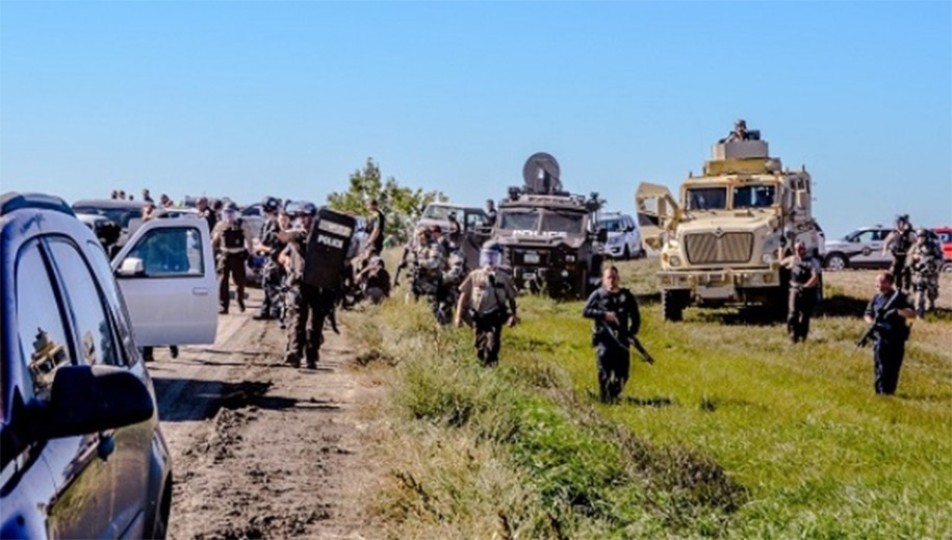 Activists vow to keep up resistance to Dakota Access Pipeline.

Police arrested 141 people in North Dakota on Thursday, moving in with pepper spray and armored tanks on Native American water protectors and other activists who for months have waged resistance against the Dakota Access Pipeline (DAPL).

Tara Houska, an Ojibwe attorney and director of the rights group Honor the Earth, told Democracy Now! on Friday that the raid was an act of "all-out war...waged on Indigenous protectors."

Houska, who was reportedly shot in the face with a beanbag round during the onslaught, also said in a separate statement released by a coalition of Indigenous groups on Friday, "Yesterday was a shameful moment in American history. Law enforcement is supposed to serve and protect the people, not corporate interests. Police enacted violence on people who were armed only with prayer."

Thursday's raid of the Cannon Ball site came amid months of Indigenous-led resistance to the $3.8 billion pipeline, which opponents say violates Native Americans' treaty rights and threatens their access to safe water. The militarized response also signals that recent escalation of police tactics, which reportedly include brutality and excessive criminal charges against protesters and journalists, may continue. Altogether, police have made about 260 arrests since the demonstrations began to pick up momentum and media coverage in August.

Rose Stiffarm, a Native American cinematographer, told the Guardian that the response Thursday was unnecessarily harsh. "The government is attacking us for protesting, for protecting the water," she said Friday. "We are innocent people—women, children, and elders."

Despite the raid, pipeline opponents have sworn to remain steadfast in their actions. "Everybody is still standing strong. We are still holding the lands," Dean Dedman, Jr., a member of the Standing Rock Hunkpapa tribe from South Dakota, added to the Guardian. "We're all just trying to keep the prayer and keep the singing."

Kandi Mossett of the Indigenous Environmental Network described the scene as being "a war zone. I was sprayed in the face with pepper spray, the guy next to me was shot by something that didn't break the skin but appeared to have broken the ribs, and another guy beside me was randomly snatched violently by police shoving me into the officers who held me off with batons then tried to grab me."

"I'm still in shock and keep waiting to wake from what's surely a nightmare though this is my reality as a Native woman in 2016 trying to defend the sacred," she said.

Houska recalled similar scenes. "I saw an officer raise his gun to my face and was pulled back by another protector just as a beanbag round ricocheted off a trailer next to my head. As that was happening, several teenagers a few feet a way were maced as some police officers smiled and laughed. The original peoples of this country have rights—yesterday we were treated like animals for the benefit of Dakota Access. Construction resumed as night fell."

Eryn Wise of the Indigenous Youth Council said, "I have no words for what happened to any of us today. They are trying to again rewrite our narrative and we simply will not allow it. Our youth are watching and remember the faces of the officers that assaulted them. They pray for them."

Environmental law firm Earthjustice, which represents the Standing Rock Sioux tribe, also noted that the Obama administration still has "a tremendous amount of responsibility and control" over what happens at the DAPL site. That includes making a decision on the easement which could prohibit the pipeline company from building under Lake Oahe. The government has requested that the oil company behind the pipeline, Energy Transfer Partners, cease construction within 20 miles of the easement, but the company has been ignoring that request as it creeps closer to the water's edge and fueling tensions between police and protesters.

Regardless of the easement decision, Earthjustice added, the U.S. Army Corps of Engineers has the authority to order that work stop on the pipeline in the immediate area of Lake Oahe.