TEHRAN (Basirat)-The five world leaders stand close together, all firmly at the helm of their respective nations, which together could lay claim to leading the free world. 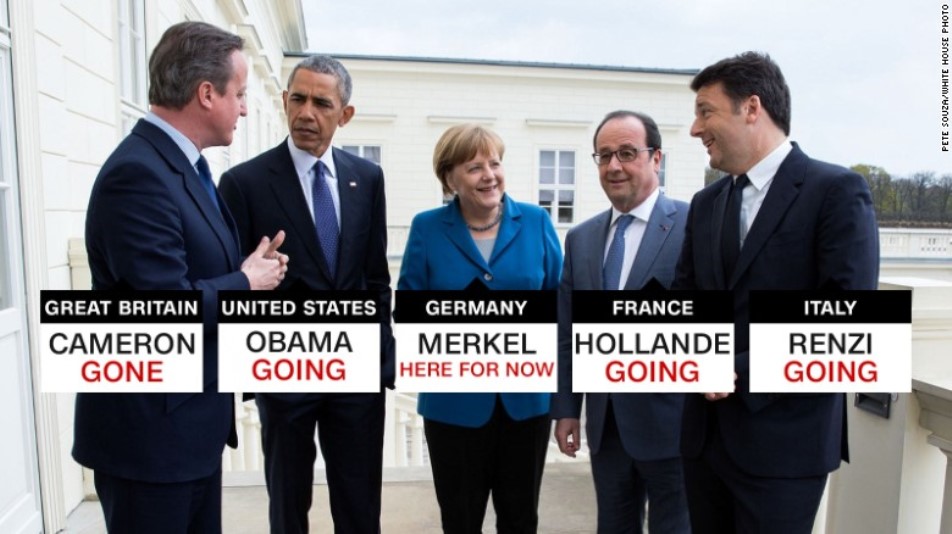 The five world leaders stand close together, all firmly at the helm of their respective nations, which together could lay claim to leading the free world.

Now, all but one are going or gone.
All but one lost their jobs or have legacies in jeopardy amid the rising wave of populism in the West.
And the last one faces a test of her own soon.
The photo showed some of the state of the world in late April. Here’s what happened to the photo’s subjects since.
From the left, (not politically):

David Cameron resigned as the United Kingdom’s Prime Minister hours after his countrymen voted to demand a "Brexit” and leave the European Union.

The shock was not that Obama would leave the presidency of the United States — two terms and you’re done is in the US Constitution, after all — but the transfer of power to a businessman-TV reality star-neophyte politician called Donald Trump stunned much of the world.

Angela Merkel said she will run for a fourth term as German Chancellor in elections next year. She said she had thought about the decision long and hard. She has angered voters with her policy to keep Germany’s borders open to migrants and her party lost badly in recent local elections. But if the German electorate wants someone known and familiar in these turbulent times, Merkel could be their choice.

Francois Hollande revealed last week that he would not run for re-election as French President. It’s the first time since 1958, when France’s fifth republic was created, that an incumbent president has not sought a second term. But Hollande has low popularity ratings and France seems to be taking a turn to the right.

Like Cameron, Italian Prime Minister Matteo Renzi has become a victim of a referendum he called. When nearly 60% of voters opposed his call for constitutional reform, Renzi handed his resignation to President Sergio Mattarella. He’s agreed to stay until the country gets its next budget agreed, but he is on his way out.
Error Report
0