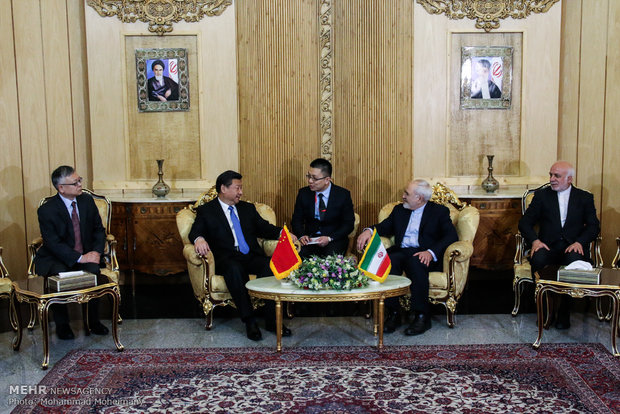 Xi's visit comes a few days after West-led sanctions on Iran were lifted following an announcement by the International Atomic Energy Agency (IAEA) confirming that Tehran had scaled back its nuclear program.
As a member of the Group 5+1 (the five permanent UN Security Council members plus Germany), China played a constructive role in prior negotiations.
It is the first state visit in 14 years by a Chinese head of state to Iran, and also Xi's first trip to the ancient country, whose friendship with China dates back to 2,000 years ago thanks to the Silk Road, Xinhua reported.
The Chinese president will meet his Iranian counterpart, Hassan Rouhani, on Saturday for discussions on aligning their national development strategies and boosting cooperation on both political and economic fronts,(Tasnim) reported.
During Xi's visit, the two countries are expected to lift their ties to a comprehensive strategic partnership.
Xi and Rouhani have met each other on multiple occasions over recent years. Rouhani paid a state visit to China in May 2014.
Xi is also scheduled to meet Iranian Parliament Speaker Ali Larijani and Supreme Leader of the Islamic Revolution Ayatollah Seyed Ali Khamenei during his stay in Tehran.
"China and Iran are faced with important opportunities in developing their relations," Chinese Vice Foreign Minister Zhang Ming told reporters earlier this week. "This visit will be a milestone that will usher in a new era of bilateral ties featuring comprehensive, long-term and stable development."
The two countries established diplomatic ties in 1971, and their relationship has since enjoyed sound and steady development.
Xi will conclude on Saturday night his five-day, three-nation tour of the Middle East, which has already taken him to Saudi Arabia and Egypt. It is Xi's first overseas visit this year and also his first trip to the region since he became Chinese president in 2013.
Error Report
0