TEHRAN (Basirat)- What is abundantly clear is that the Obama administration has supported both al Qaeda and ISIS-Daesh, providing the terrorists in Raqqa Northern Syria as well as in Aleppo with large quantities of weapons. The Western media is portraying the Al Qaeda terrorists in Aleppo as “opposition” freedom fighters protecting civilians. This is a big lie: The al Qaeda affiliated rebels in Aleppo have committed countless atrocities, including arbitrary executions of civilians, yet the media is now blaming Bashar al Assad for the crimes committed by the US-NATO sponsored Al Qaeda brigades. 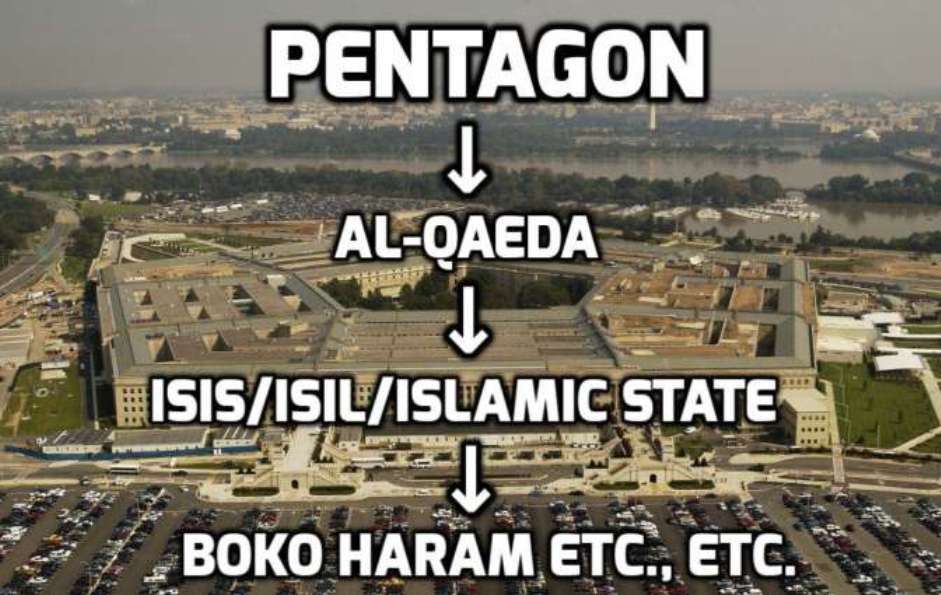 What is abundantly clear is that the Obama administration has supported both al Qaeda and ISIS-Daesh, providing the terrorists in Raqqa Northern Syria as well as in Aleppo with large quantities of weapons.  The Western media is portraying the Al Qaeda terrorists in Aleppo as "opposition” freedom fighters protecting civilians. This is a big lie: The al Qaeda affiliated rebels in Aleppo have committed countless atrocities, including arbitrary executions of civilians, yet the media is now blaming Bashar al Assad for the crimes committed by the US-NATO sponsored Al Qaeda brigades.

US military aid has been channelled to Al Qaeda as well as ISIS-Daesh. The US has used the illegal weapons market to channel vast amounts of weapons and military hardware to the Syrian "rebels.

This article focusses on the supply routes and illicit trade in small arms used by the Pentagon to deliver weapons to the jihadist "freedom fighters”.

These weapons produced in third countries are purchased by the Pentagon. They are then channelled to Al Qaeda and ISIS-Daesh terrorists fighting government forces in Iraq and Syria. These weapons are also used to kill innocent civilians.

According to Jane’s Defence Weekly, quoting documents released by the U.S. Government’s Federal Business Opportunities (FBO), the US –as part of its "counterterrorism campaign”– has provided Syrian rebels [aka moderate Al Qaeda] with large amounts of weapons and ammunition.

The US and its allies (including Turkey and Saudi Arabia) have relied on the illicit trade in light weaponry produced in Eastern Europe, the Balkans, China, etc. for delivery to rebel groups inside Syria, including ISIS-Daesh and Al Nusra. In turn, operating out of the occupied Golan Heights, Israel’s IDF has provided weapons, ammunition, logistical support to Al Qaeda rebels operating in Southern Syria.

While Washington’s Middle East allies undertake shady transactions in a buoyant market for light weapons, a significant part of these illicit weapons shipments is nonetheless directly commissioned by the US government.

These shipments of weapons are not conducted through internationally approved weapons transfers. While they are the result of  a Pentagon (or US government) procurement, they are not recorded as "official” military aid. They use private traders and shipping companies within the realm of a thriving illicit trade in light weapons.

Based on the examination of a single December 2015 Pentagon sponsored shipment of more than 990 tons, one can reasonably conclude that the amounts of light weapons in the hands of  ”opposition” rebels inside Syria is substantial and exceedingly large.

Although the bulk of the weapons and ammunition supplied to the Syrian rebels (including the FSA, Al Qaeda affiliated entities and ISIS-Daesh) are channelled by Turkey and Saudi Arabia, the US is also involved in the routine delivery (originating from third countries) of light weapons to the rebels including anti-tank and rocket launchers.

America’s weapons shipments to Syria’s rebels are commissioned by the Pentagon (and/or a US government agency) through several intermediaries via private weapons trading and shipping companies from the Black Sea port city of Constanta. None of these weapons under this de facto (unofficial) "US military aid” program are "Made in the USA”. These light weapons purchased in Eastern Europe and the Balkans in the illicit market are relatively inexpensive.

Moreover, Washington’s decision not to send US made weaponry to the rebels is meant to uphold the camouflage. No doubt, what Washington wants is to ensure that US and/or Western made weapons are not found in the hands of terrorists. As we recall, the White House narrative at the outset of the war in 2011 was: "humanitarian aid” to the rebels, coupled with "some military gear….[but no weapons]” (BBC, October 10, 2015)

US military aid to the rebels channeled (unofficially) through the illicit market, is routine and ongoing. In December 2015, a major US sponsored shipment of a staggering 995 tons of weapons was conducted in blatant violation of the ceasefire. According to Jane’s Defence Weekly, the U.S.   "is providing [the weapons] to Syrian rebel groups as part of a programme that continues despite the widely respected ceasefire in that country [in December 2015].”

According to Jane, the shipments of weapons on behalf of the US are entrusted to private weapons traders and shipping companies:

"The FBO has released two solicitations in recent months [early 2015] looking for shipping companies to transport explosive material from Eastern Europe to the Jordanian port of Aqaba on behalf of the US Navy’s Military Sealift Command.” (Jane.com April 2016)

The shipments of weapons purchased and funded by the US are carefully coordinated, with deliveries to rebels in the North and South of Syria respectively. The weapons are shipped out of the Romanian Black Sea port of Constanta (December 2015):

1) First, to the Turkish Eastern Mediterranean facility of Agalar-Limani near Tasucu in support of rebels in Northern Syria, to be smuggled into Syria with the support of the Turkish authorities. (half the shipment unloaded)

2) The remainder of the shipment to the Jordanian Red Sea port of Aqaba (for rebels in Southern Syria) via the Suez canal. From Aqaba, the weapons would be smuggled into Syria through the Southern Syria-Jordanian border.

According to Jane, the cargo of light weaponry included AK-47 rifles, PKM general-purpose machine guns, DShK heavy machine guns, RPG-7 rocket launchers, and 9K111M Faktoria anti-tank guided weapon (ATGW) systems. It is worth noting that a large share of the RPG rocket launchers were slated for delivery to Northern Syria (see table below).

Also of significance, the Black Sea route to Syria has also been used to ship Ukrainian weapons to Al Qaeda and ISIS Daesh.

994 Tons of Weapons in a Single shipment, Courtesy of Uncle Sam

The following table provides information on the breakdown of the weapons shipment for December 2015 documented by Jane Defense Weekly.

Bear in mind the numbers pertain to a single shipment in December 2015, expressed in kilos (kg).

The amounts are substantial:

The total shipment to Aqaba and Agalar is of the order of 994 tons of "humanitarian” R2P light weapons for the "Moderates” in Syria. (in a single shipment out of Romania) among numerous comparable shipments by sea as well as by air.

This trade in light weapons is transacted through private companies on contract to the US government’s Federal Business Opportunities (FBO), a commercial trading entity acting on behalf of the US Navy MSC:

1) The Pentagon (or the relevant government agency) instructs the US Navy MSC with details and specifications of the light weapons to be purchased and shipped to Syria’s "freedom fighters” via Turkey and Jordan. The ports of delivery are specified. The final destination of the weapons is not mentioned.

2) The Navy’s MSC places the order with the FBO.

3) The FBO in turn transacts with private companies for the procurement and shipping of the weapons and "explosive materials” out of Constanta, Romania.

According to Jane’s report:”The FBO has released two solicitations in recent months looking for shipping companies to transport explosive material from Eastern Europe to the Jordanian port of Aqaba on behalf of the US Navy’s Military Sealift Command.”  (emphasis added)

A still from a video released by the Syrian rebel group Jaish al-Izzah on 16 December 2015 shows one of its fighters preparing to fire an ATGW that could be either a 9K111 Fagot or a 9K111M Faktoria, the two being externally identical. Jaish al-Izzah also uses US-made TOW ATGWs. Source: Jane Defence Weekly

Released on 3 November 2015, the first solicitation sought a contractor to ship 81 containers of cargo that included explosive material from Constanta in Romania to Aqaba.

The solicitation was subsequently updated with a detailed packing list that showed the cargo had a total weight of 994 tonnes, a little under half of which was to be unloaded at Agalar, a military pier near the Turkish town of Tasucu, the other half at Aqaba. (Jane’s op cit)

The US Navy’s Military Sealift Command’s (MSC) mission is  to "Operate the ships which sustain our warfighting forces and deliver specialized maritime services in support of national security objectives in peace and war.” (MSC mission)

Weapons Shipments by America’s Allies in the Middle East

The Jane Defence Weekly report pertains to shipments initiated by the Pentagon through a third country. It does not address the broader and much larger flow of military equipment and weaponry to Al Qaeda and the Islamic State, commissioned by America’s allies in the Middle East (e.g Turkey, Saudi Arabia). These light weapons are also purchased from third countries  ( i.e. Eastern Europe, Balkans) through private traders:

[In 2012] representatives of the Free Syrian Army made contact with weapons dealers in Eastern Europe and the Black Sea region, hoping to procure weapons that would then be smuggled across the Turkish-Syrian border. The Syrian rebels also reached out to [al Qaeda] militia groups in Libya for assistance. The Libyan groups have proven to be a particularly important source of weapons for the Syrian insurgents. …

Efforts by Libyan brokers to supply the rebels have coincided with, and perhaps been tied to, efforts by Turkey, Qatar, Saudi Arabia, and Jordan to arm the rebels. …   Global initiative against Transnational Crimes (2013 Study)

According to Deutsche Welle, exports of weapons from third countries (eg. Romania) to Syria are also dispatched by air via Saudi Arabia, Jordan, Turkey and the UAE:  ”…the munitions, including Kalashnikov AK-47 assault rifles, machine guns, grenades as well as anti-tank guns, are initially off-loaded in Saudi airbases and ports before smugglers dispatch them to Syrian militants.” (quoted by Press TV, August 8, 2016, emphasis added)

"International norms governing the control of exports of military technology and equipment are brazenly flouted, the report said, and a considerable amount of munitions exported from Bulgaria to the aforementioned countries only bear the sign "unknown consignment.”

Such weapons have previously ended up in the hands of such terrorist groups as Daesh, which Saudi Arabia is widely believed to be supporting.

Earlier reports had already exposed that arms were purportedly being trucked into Syria under Turkish military escort, and transferred to militant leaders at prearranged rendezvous.” (Press TV, August 8, 2016)

The United States and its allies use arms trafficking –i.e. the unregulated illicit trade in light weapons through private traders including organized crime–, to channel large amounts of weapons and ammunition to the terrorists inside Syria. These shady transactions initiated in Washington are in derogation of international law and the treaties under UN auspices pertaining to the trade in small and light weaponry.

Pentagon procurement is directed –through various intermediaries– towards the illicit purchase of light weapons: In all probability, the budgets allocated by the Pentagon to financing these  purchases of weapons channeled towards Syria are not accounted for and/or categorized by the US Department of Defense as bona fide "US military aid”. Meanwhile the UN has remained mum on the State sponsorship of the illegal purchase and smuggling of weapons into Syria.