The presence of the people on the scene has been the reason for the removal of the shadow of war and aggression over Iran.

TEHRAN(Basirat):In a meeting with thousands of laborers and entrepreneurs on the eve of Labor Day, Leader of the Islamic Revolution Ayatollah Seyyed Ali Khamenei described being a laborer as a source of pride and stressed the need to provide “job security and livelihood” for the laborer community 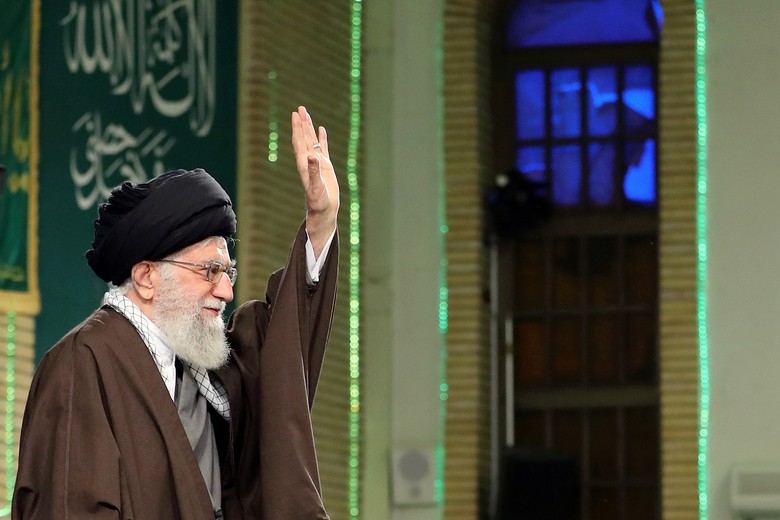 He added "The presence of workers and people from all walks of life on the scene has always lifted the shadow of the enemy’s war and aggression over the Iranian nation and whoever respects ‘the country, establishment, and security,’ should participate in the upcoming elections because this decisive presence will rid the country from the evil of the enemy.”

The Leader of the Islamic Revolution offered his congratulations on the auspicious birth anniversary of Imam Aba Abdullah al-Hussain (PBUH) and described as a source of honor for the nation the affection for, appreciation of and devotion to the Imam.

Ayatollah Khamenei described laborers as the "backbone of the economy and production,” adding, "For an advanced and independent economy and economic prosperity, great importance should be attached to the working class and if we want the labor community to enjoy decent privileges and wages, we should highlight and rely on ‘national production’.”

The Leader of the Islamic Revolution cited the heartening of laborers in the society as the means to sort out the economic situation, saying, "The issue of the country’s economy is not unsolvable and it is not a knot that cannot be untied and one of the important requirements for this settlement is respecting and recognizing the rights of laborers.”

He reiterated, "The labor community should feel revered, respected, dignified and appreciated and in that case there would be no fatigue, frustration, and apathy in [them for] carrying out their jobs.”

Underscoring the "promotion of the culture of work and its importance,” Ayatollah Khamenei added, "The essence of interest and enthusiasm in labor should be promoted in the society and labor should be so valuable that laborers would proudly declare being a laborer and feel no humiliation in doing so.”

He cited the "provision of job security” and the "provision of the livelihood of workers” as two important responsibilities of the officials and said, "The administration, employers, workers and entrepreneurs are all responsible in their own turn for the settlement of the issues of the laborer community in this regard and must follow through with their duties.

Ayatollah Khamenei cited the creation of a public discourse and demand as the reason behind making such remarks and emphasizing resistance economy and the naming of the Persian calendar years [after such titles], adding, "The transformation of an issue into public demand will result in its realization and the officials will also move in that direction.”

Pointing to the political and social roles of laborers in various countries and the enemy’s efforts to pit the laborer community against the Islamic Republic from the very early days of the revolution, he said, "Despite these efforts, the laborers have always taken the side of the establishment and supported it and the religious and active laborer community has, in fact, slapped the enemies in the face throughout these years.”

Ayatollah Khamenei added, "The Islamic Republic and all its officials should be thankful to and appreciative of the laborer community, because it has always stood by and accompanied the establishment and with the grace of God such will also be the case henceforth.”

Ayatollah Khamenei stressed, "Anyone taking charge of the executive affairs of the country and all of those assuming responsibility of the economic sectors in the next administration should from the very first day focus their efforts and struggles on the issue of job creation, because not even a day’s delay is permissible on this important issue.”

He cited attention to national production in all industrial, agricultural, public service, and other sectors as a prerequisite to the resolution of the issue of job creation, reiterating, "The officials in the next administration should take up this issue at the earliest opportunity through planning.”

Continuing, the Leader of the Islamic Revolution expressed satisfaction with the fact that the election atmosphere is heating up in the country, adding, "The beloved nation must know that turning out for the elections is decisive upon the issue of national security and if the people come to the ballot boxes, the country will continue to remain secure.”

Citing reliable intelligence, the Leader said, "Fear of the nation’s presence on the scene is the main reason for the abstention of the insolent, shameless and bullying enemies from taking any firm action and measure against Iran, because they are scared of the people’s presence on the scene in the true sense of the word.” Ayatollah Khamenei added, "If a gap opens up between the nation and the establishment and the nation refuses to appear on the scene, the enemies will do as they wish, because such things are not very difficult for them as they have done so in other parts of the world.”

Criticizing those who claim that their own presence has removed the specter of war from the country, the Leader of the Revolution said, "Sometimes we hear some saying or having said in the past that when we assumed office, we succeeded in lifting the shadow of war over the country, but such remarks are not correct and the truth is that in successive years, the presence of the people on the scene has been the reason for the removal of the shadow of war and aggression over Iran.”

The Leader cited participation in the elections as the most important manifestation of this national presence, adding, "I will never recommend who to vote for or against, but I insist that you definitely go to the ballot boxes and vote for whoever you deem [qualified].”

Concluding this segment of his remarks, the Leader of the Islamic Revolution stressed, "Anyone who cares for the country, establishment and security should participate in the elections. This decisive turnout will rid the country of the evil of the enemy.”

Ayatollah Khamenei pointed to the necessity of deliberation, reflection and consultation in voting for candidates, adding, "Those who vote for candidates based on reason and cogitation, even if they have made a misjudgment, are excused before God, but if they make a choice haphazardly and carelessly, they have no excuses before God or even their own conscience.”

After outlining those important points for the people, the Leader of the Revolution offered some advice to the six candidates.

The Leader’s first recommendation to the candidates was that "they render their motivation divine and to struggle for serving and not power, because anyone who enters the arena for serving the people, particularly the poor classes, every one of his words and acts are prized and rewarded.”

The second recommendation from the Leader of the Revolution to the presidential candidates was the explicit declaration of support for impoverished classes.

He added, "Express your slogans and agendas such that everyone would know that you have entered the fray with the key aim of supporting the poor classes and that the resolution of this important problem is of serious priority for you.”

Addressing the candidates, the Leader of the Islamic Revolution once again said, "Make a pledge to God that if the people elect you, you will respect the priorities and pay more attention to the strata that need greater care.”

He cited "revolutionary and effortful undertaking” as the only way to settle the problems of the country, adding, "The people and the candidates should know that to solve the existing problems, one should be prepared and committed to serving like an indefatigable worker and to break the deadlocks and push the country forward with "high quality and extensive, industrious and revolutionary” labor.

The Leader of the Islamic Revolution criticized those who term being revolutionary as synonymous with being disorderly, reiterating, "Order is one of the main principles of revolutionarism. Revolutionarism means refraining from indulging in ceremonial and marginal issues and flashy tasks, [it is] unending and indefatigable efforts to solve the problems of the people and untying the knots in production and job creation through shortcuts.”

In the final section of his remarks, the Leader of the Revolution strongly advised the officials of all the institutions involved in the elections, including the Interior Ministry, the Guardian Council and the Islamic Republic of Iran Broadcasting about the elections, saying, "The votes of the people are entrusted with you. Safeguard this entrusted item with utmost care and protection and do not allow anybody to tamper with it.”

He cited a close, indiscriminate, and unceremonious observation of the law as a prerequisite to an acceptable election that is approved by God Almighty and repeated his principal remark in the previous years, "The people’s vote is the right of the people and if anyone violates the right of the people, he will not be able to shoulder the consequences.”

Prior to the remarks by the Leader of the Islamic Revolution, the minister of cooperatives, labor and social welfare described job creation through small and medium enterprises as the only effective way to create job opportunities in the society, adding, "In the past four years, nearly two million jobs were created in the country, but given the incoming population, this figure does supply the damned.”