Enemies to Regret Any Aggression on Iran: Top Officer

TEHRAN (Basirat): A top Iranian general says any aggression on Iran’s territory will receive a crushing response in the form of attacks on targets the Islamic Republic determines. 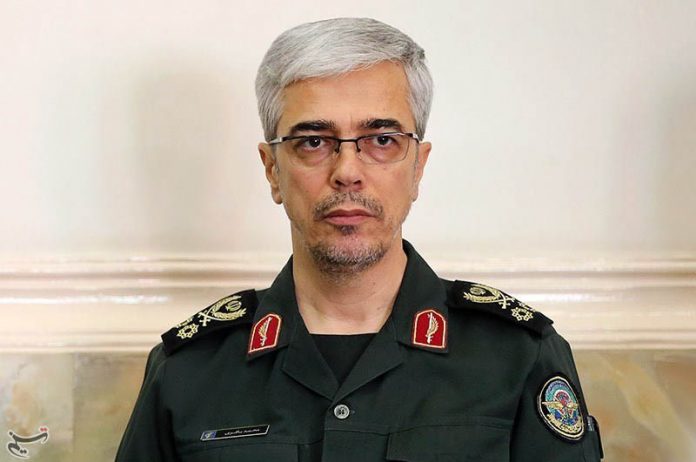 Chief of Staff of the Iranian Armed Forces Major General Mohammad Baqeri says the enemy should know any miscalculation or act of aggression against the Muslim Iranian territory or establishment will elicit an immediate decisive and crushing response from Iran in the form of reciprocal attacks on the targets and points the country determines.

This scenario will only lead to the enemy’s defeat and regret, he noted, according to a Farsi report by Farda News website.

Baqeri’s comments came in the wake of aggressive remarks against Tehran by Saudi Deputy Crown Prince Mohammed bin Salman, who accused Tehran last week of seeking to "dominate the Muslim world,” and said, "We will work to have the battle in Iran rather than in Saudi Arabia.”

Enemies of Iran are incapable of carrying out a military invasion of the Islamic Republic, Baqeri noted.

Therefore, he added, by employing unworthy terrorists to endanger the safety of the Iranian borders and the country’s interests, they are resorting to approaches adopted by coward thieves and brigands, a move which will only lead to their ultimate humiliation.

Commenting on the recent tragic massacre of nine brave Iranian border guards near Iran-Pakistan borders in an attack launched from the Pakistani side, he regretted that areas in the proximity of the common border in the Pakistani territory have turned into a safe haven for the mercenary terrorist groups sponsored by Saudi Arabia, and they are training, preparing and equipping themselves there.

Last Wednesday, nine Iranian border guards were killed and two others injured in clashes near the Iranian town of Mirjaveh, in the southeastern Iranian province of Sistan-Baluchestan. Another guard was reportedly taken hostage by terrorists after being wounded. The Jaish ul-Adl terrorist group in a statement claimed responsibility for the attack.

"We are not going to tolerate the continuation of the present situation on common borders and expect the Pakistani officials to act responsibly and, by asserting their control over the border areas, capture the terrorists, shut down their bases in their territory and hand them over to Iran,” he added.