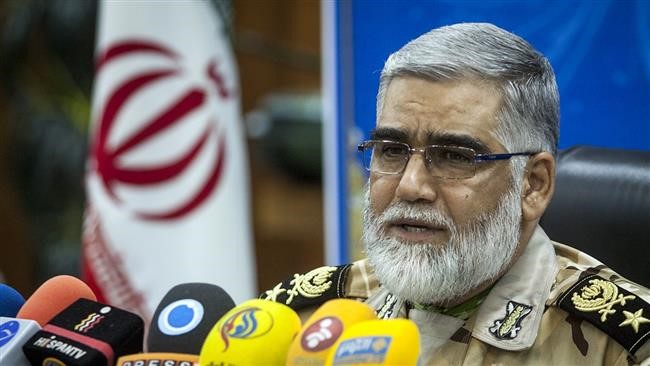 Speaking to the Tasnim News Agency, Brigadier General Pourdastan said the IRGC’s missile attack on Daesh terrorists in Syria’s Deir ez-Zor was a response to terrorists and those who are daydreaming about threatening and invading Iran.
"The IRGC’s missile operation was also a strong and firm response to the false remarks made by the reactionary countries’ leaders,” he noted.
The commander further highlighted the preparedness of the country’s Armed Forces in the face of foreign threats, saying the Army along with other Armed Forces is prepared to powerfully respond to any wrongdoing by the enemy.
In an operation on June 18 codenamed "Laylat al-Qadr”, the IRGC fired six mid-range ballistic missiles at various targets within a range of 650 to 700 kilometers, including the headquarters, ammunition and logistic depots of the terrorists.
Speaking to the Tasnim News Agency, Head of the IRGC Public Relations Department General Ramezan Sharif said, "The firing of these missiles had previously been coordinated with Syria.”
He added that the missile attacks were carried out in response to the recent Daesh-claimed terror attacks in Tehran, adding that Zolfaqar high-precision missiles were among those used in the attack.
Also, the IRGC public relations office statement said that the missiles were fired from the IRGC aerospace force’s bases in Iran’s western provinces of Kermanshah and Kurdistan.