TEHRAN (Basirat):Iranian Foreign Minister Mohammad Javad Zarif has expressed regret that the terrorist Mujahedin-e Khalq Organization (MKO) has been given permission to carry out its activities in France. 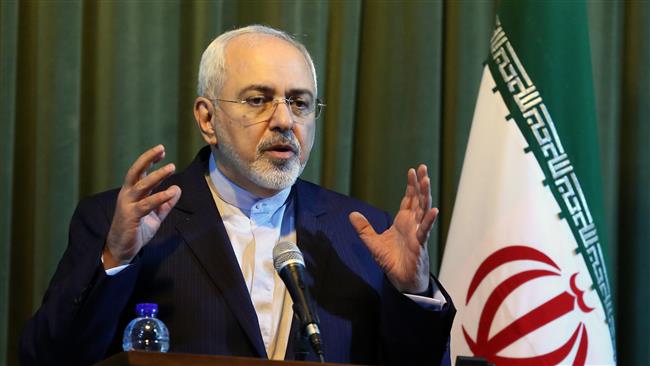 The presence and activities of the MKO in France are regarded as "a moot point" in relations between Tehran and Paris, Zarif told IRIB in an interview published on Saturday, a day after he wrapped up his two-day visit to the French capital.
"During our talks with the French officials, we raised this issue as a moot point in our relations and they also emphasized that they have no connection with this group (MKO),” he said.
He added that the MKO’s terrorist nature is not hidden to anybody, saying all regional and European countries are aware of the group’s acts of terror.
The Iranian foreign minister expressed regret that some "reactionary regimes in the region are once again capitalizing on this group as they did so in the past.”
Zarif added that the Islamic Republic is aware that Saudi Arabia has been colluding with the MKO and providing it with financial support since the Iraqi imposed war on Iran in the 1980s.
The Al Saud regime has decided to publicize its cooperation with the terrorist group since last year by attending its meetings, he said.
On Saturday, the MKO terror group held a meeting in Paris, which was attended by some of the former US, European and Saudi officials, including former Saudi spy chief, Prince Turki al-Faisal, who also delivered a speech.
On July 9, 2016, Paris hosted another annual meeting organized by the MKO terrorist group, which was also attended by Faisal.
Zarif emphasized that all such moves show the desperation of the Islamic Republic’s opponents who had no option but to resort to groups with no place among the Iranian nation in order to achieve their own "ominous objectives.”
The MKO is the most hated terrorist group among the Iranians because of its dark history of assassinations and bombings and for siding with former Iraqi dictator Saddam Hussein in his eight-year war against Iran in the 1980s.
Out of the nearly 17,000 Iranians killed in terrorist assaults since the victory of Iran’s 1979 Islamic Revolution, about 12,000 have fallen victim to MKO’s acts of terror.
The terrorist group also helped Saddam in his brutal crackdown on his opponents.