The new regional groups must be reborn; Academic

Tehran (Basirat): A senior political analyst said the new regional groups must be reborn; because the existing groups in the Middle East have failed in their duty and we need some new groups like Hezbollah. 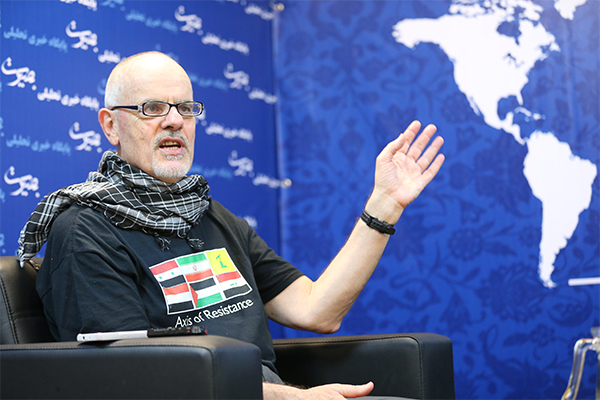 "Iran has the important role clearly and that’s why Iran has feared so much. Recently there was a story, Henry Kissinger said the DAESH is defeated, we will have an Iranian empire in the region. He’s exaggerating but what he fears and what Israel fears is that a strong coalitions led by Iran. Because Iran has the capacity, the principles and strength to carry on that role,” Professor Tim Anderson, a lecturer of political economy at the University of Sydney, said in an interview with the Basirat.

Tim Anderson is an Australian political economist and author. He is a senior lecturer at the University of Sydney. Anderson has degrees in economics and international politics, and a doctorate on the political economy of economic liberalization in Australia. His recent book is "The Dirty War on Syria: Washington, Regime Change and Resistance" that published by Global Research in 2016. His travel to Iran and presence in Basirat Base was a great opportunity to talk with him about the issues of the Middle East and the Islamic world.

Basirat: One of the main challenges in the Middle East and North Africa is the Syrian crisis; where regional and international actors are present, how do you describe the role of the Islamic Republic of Iran in solving this crisis?

Anderson: In my view as an outsider to region, Syria crisis has various factors. Iran has a very important role and Russia has recognized that and you know Russia has played an important role too. I am talking about last two years. Since the assistance from Iran and Russia has increased. Of course both of countries had been supporting Syria before. But the military cooperation has increased almost two years ago; the military cooperation with Iranian generals and Russian air force has been very important in turning point of the war.

Basirat: If we look at the behavior of the Western powers, especially the United States, we can find out that their main strategy in Middle East is to break regional powers down; US’ attempt for disintegration of Syria is one of the imperialism policies in the region; an effort that has not been successful so far, what’s your opinion?

Anderson: United States has been following this plan for a quiet long time. It’s been a plan of empire to divide the little states even further. In this way, it will be able to develop his domination. In fact, the United States seeks to rebuild its domination over the past few decades to divide and weaken people, to stop them cooperating together. That was DAESH created. DAESH created to prevent cooperation with Tehran. That’s why DAESH created then it moved to try divide Syria. Now DAESH is destroyed and Kurdish card is been played to try divide Syria.

I think big powers always have tried to divide people, so the challenge for the people under attack (the Mostazafin people) to come together and rebuild the links. The west is afraid of that.

Basirat: You addressed to Mostazafin people. In your idea, which country has the ability to be the leader of the Mostazafin in the region and in the world? Why?

Anderson: Iran has the important role clearly and that’s why Iran has feared so much. Recently there was a story, Henry Kissinger said the DAESH is defeated, we will have an Iranian empire in the region. He’s exaggerating but what he fears and what Israel fears is that a strong coalitions led by Iran. Because Iran has the capacity, the principles and strength to carry on that role.

Egypt is possibly could do but Egypt politically does not have political will, order and capacity to play that role. So I believe that Iran has important future role in the region to bring together these countries and we should not ignore the role of the axis of resistance.

Basirat: As you pointed out, the role of the axis of resistance in the future of region is very critical, Hezbollah is one side of this axis. How do you analyze the Hezbollah’ role against the expansionist and occupational plans of the Zionist regime?

Anderson: Hezbollah has proved himself through unity and discipline to be a very powerful force in defending the Lebanon and not only Lebanon but also axis of resistance from the other kind of groups created by Washington, Al Saud and Qatar as destructive tools in the Middle East. So Hezbollah’s experience and competence, because they have political and diplomatic weight also now not just in Lebanon but in the region.

Basirat: The Islamic Revolutionary Guards Corps (IRGC) has been able to play an important role in resolving the regional crises; the fighting against ISIS is one of its efforts against Western imperialism, what is your idea?

Anderson: I’m not an expert in the military side of the organization. I understand that IRGC leadership is critical to management of the regional crisis. It has been able also to play a significant role in the war in Syria, Iraq and Lebanon. So the coordination of military forces clearly the commander part of IRGC outside Iran is clearly, has had responsibility in Iraq, Syria and probably Lebanon. And of course, it shouldn’t forget its coordination with Russia. According to what I saw in Syria, I can say that the role of the Iranian forces in Syria has been very important.

We thank you for taking time out to answer our question. We appreciate you taking the time to respond personally to us.