TEHRAN (Basirat) : In a symbolic gesture to safeguard the environment a young bride from the western province of Ilam made the groom to pledge to plant 1372 trees as her “mahr” - a mandatory payment paid or promised to pay by the groom under Islamic law. 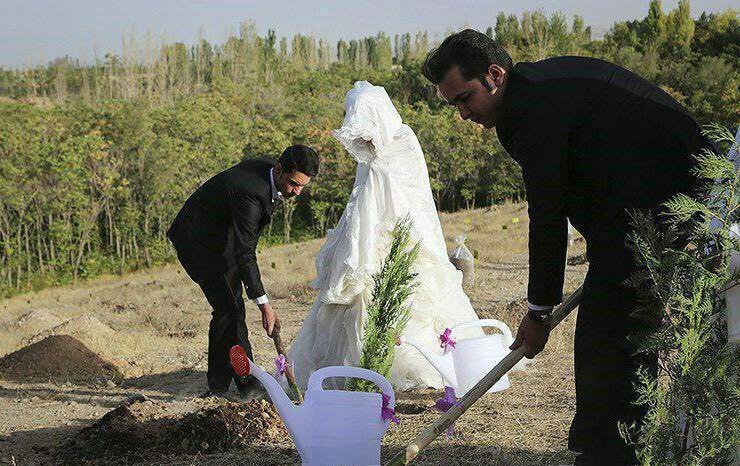 A mahr (or mahriyeh) is typically specified in the marriage contract. While the mahr is often money, it can also be anything agreed upon by the bride such as jewelry, home goods, furniture, a dwelling or some land.
In case of the young Iranian bride, she opt for planting 1372 trees marking the year [in the Iranian calendar] she was born in an attempt to protect the environment and garner more attention to this matter.
Environmental issues have become a global concern for some years now. The growing population with unquenchable thirst for development have violated the limits to the life-sustaining resources earth can provide us. Industrialization, most significantly in developing countries, are inflicting irreparable damages to the environment and natural resources.
From north to south, east to west cities in Iran are all facing environmental challenges to some extent resulted from shortsighted policies over the years. Desertification, water shortage, drying wetlands, persisting air pollution, sand and dust storms, etc. are all the outcomes of flawed policies adopted regardless of their environmental ramifications.
Building numerous dams and digging wells resulting in wetlands total dryness and severe water scarcity, deforestation partially caused by executing development projects in forests, poor land-use planning, unsustainable agriculture depleting underground resources and leading to rapid land subsidence, unsafe waste disposal and leachate produced as waste decomposes, marine pollution, loss of biodiversity attributed to the influence of human beings on the ecosystem by deeply altering the environment, etc. are only tip of the iceberg.
Years of unsustainable development and conflicts especially in Middle Eastern countries coupled with global warming and climatic extremes are rendering some parts of the region almost uninhabitable and this is only the beginning.
The vicious circle of conflicts, wars and catastrophic environmental challenges is what gradually but definitely destroying the environment at a rate unprecedented in centuries.
The matter is no different on a global-scale. Despite international treaties and environment conferences held annually to capture world attention to the environment some world leaders would prefer immediate gain at expense of lasting environmental harms to the world.
For one, the U.S., as one of the leading producers of greenhouse gasses, has notified the UN of its intention to withdraw from the 2015 Paris climate agreement arguing that the agreement was a pernicious threat to the economy and American sovereignty.
Everyday scientist and environmentalist are all trying to warn the world leaders of an imminent grim future where the earth would not be suitable for living anymore, which seemingly falls on deaf ears.
The world should only wait, crossing their fingers and pray or the future where all world leaders would actually walk the walk and make the environment a priority. Let’s hope it won’t be too late.