TEHRAN(Basirat): "It is up to the Trump administration whether they want to flip this into an opportunity to belatedly start talking directly to Pyongyang, or just continue down the beaten track of shows of force, more U.N. sanctions, and secondary sanctions." 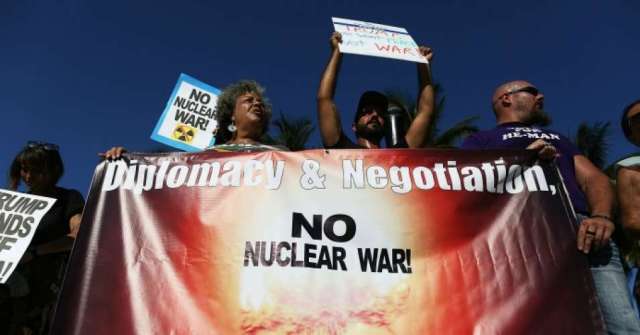 Calls for restraint and diplomacy emerged on Sunday after North Korea claimed to have successfully tested a hydrogen bomb capable being placed on an intercontinental ballistic missile (ICBM).

A statement released from North Korea's Nuclear Weapons Institute says Pyongyang conducted the test with "perfect success" at noon local time Sunday, and purportedly showed that the country's nuclear weapons' power and technology were "in consideration of the targets and purposes."

The test had registered with international seismic agencies as a man-made earthquake near a test site in the North. Japanese and South Korean officials said it was around 10 times more powerful than the tremor picked up after North Korea's last nuclear test a year ago.

There was no independent confirmation that the detonation was a hydrogen bomb, rather than a less powerful atomic device, but Japan's Chief Cabinet Secretary Yoshihide Suga said Tokyo could not rule out such a possibility.

"There'll be debate about whether it's a true 'H-bomb' but it doesn't matter," commented Vipin Narang, associate professor of political science at MIT, of the country's sixth-ever nuclear test. "You don't want this thing anywhere near a city."

Echoing his "talking his not the answer" comments from last week, President Donald Trump sent out a series of tweets in response to the test, saying that North Korea's "words and actions continue to be very hostile and dangerous to the United States"; Pyongyang "has become a great threat"; and "South Korea is finding, as I have told them, that their talk of appeasement with North Korea will not work, they only understand one thing!"

Treasury Secretary Steven Mnuchin, meanwhile, said that he was drafting new sanctions to place on North Korea in response to the test. "It's clear this behavior is completely unacceptable," Mnuchin said on "Fox News Sunday."

Yukiya Amano, head of the U.N. nuclear agency, said the test was "an extremely regrettable act," and called on North Korea "to fully implement all relevant resolutions of the U.N. Security Council and the IAEA," which include stopping further nuclear tests.

Among those appealing for calm was Russia, declaring diplomacy "the only possible way" to resolve the conflict.

The foreign ministry in Moscow said the test merited "the strongest condemnation," and warned that "the continuation of such a line is fraught with serious consequences" for Pyongyang.

"In the unfolding conditions," the ministry statement added, it is imperative to remain calm and to refrain from any actions that lead to a further escalation of tension."

"We call on all interested parties to immediately return to dialogue and negotiations as the only possible way for an overall settlement of the problems of the Korean peninsula," it said.

Like Trump, the Center for Arms Control and Non-Proliferation, a nonpartisan Washington D.C.-based think-tank, reacted to the test with a series of tweets, but in a marked contrast, theirs said the development "underscores [the] need for 'talks about talks.'"

And while the president says "diplomacy [is] not an option. History says otherwise," it added.

"Looking at the history of U.S. relations with North Korea, the case for diplomacy is overwhelming," added anti-nuclear weapons group Ploughshares Fund.

Anti-war organization International Crisis Group similarly weighed in, saying, "The int'l community should not rule out talking to North Korea but rather direct its energy toward negotiations."

According to John Delury, a North Korea expert at Yonsei University in Seoul, "The test does not fundamentally change the situation on the Korean peninsula, though it is another acceleration." He writes at the Guardian:

What is still missing is diplomacy. It is up to the Trump administration whether they want to flip this into an opportunity to belatedly start talking directly to Pyongyang, or just continue down the beaten track of shows of force, more U.N. sanctions, and secondary sanctions. More of the same stuff that has been done for the last eight years.

In addition, said Lassina Zerbo, executive Secretary of the Comprehensive Nuclear-Test-Ban Treaty Organization (CTBTO), the test "underlines yet again the urgent need for the international community to act on putting in place a legally binding ban on nuclear testing once and for all." She called on North Korea to join the Comprehensive Nuclear-Test-Ban Treaty (CTBT), adding, "I sincerely hope that this will serve as the final wake-up call to the international community to outlaw all nuclear testing by bringing the CTBT into force."

The new test, and Trump's critical words towards South Korea, come as the president is weighing pulling out of the U.S.-Korea Free Trade Agreement (KORUS), "a move," the Associated Press writes, "that could cause a fresh economic rift between allies at a moment of heightened tensions with a common foe," North Korea.